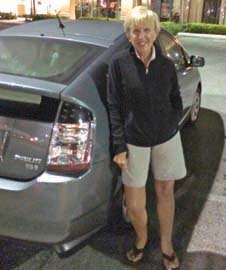 Carol Wittenberg loves her 2013 Chevy Volt, a plug-in hybrid that runs on both gas and electricity.
“It’s environmentally friendly, it’s economical and it’s comfortable and quiet,” she says.
But when Wittenberg and her husband, Larry, returned to their condominium in Highland Beach last month, the Volt remained in their Michigan garage.
“There isn’t a charging station nearby to make it worthwhile,” says Wittenberg.
As the number of electric cars on the road grows, condominiums with shared parking facilities and even small municipalities are wrestling with the question of how, if at all, to accommodate people like the Wittenbergs and others in a small group of electric-car owners seeking  convenient ways to plug in.
“It’s something that’s creating a buzz in our industry,” says Lisa Magill, an attorney who specializes in community association law for the firm of Becker & Poliakoff.
At the heart of the issue is the question of who should pay for installations of charging stations, and then once they’re in, how to ensure residents of an entire building don’t end up paying for the electricity used by a few individuals to charge cars.
Even municipalities are facing the challenge, with the town of Highland Beach deciding against the installation of a community charging station because the benefits for a few would not justify the expense paid by all of the town’s taxpayers.
Compounding the problem are the regulations in condominium documents that can range from requiring a majority vote of the board of directors for approval of a charging station to a favorable vote by 75 percent of the unit owners.
South Palm Beach resident Paul J. Least learned first hand about those rules and regulations when he tried to charge the Nissan Leaf he just purchased, using an extension cord that he ran from his first floor condo unit to a parking spot right out front.
Soon he was told by the condo association management that he could face hefty fines if he didn’t remove the extension cord.
Least says he offered to pay for electricity and for proper wiring but the condo management refused. Now, he says, he’s forced to keep the car in storage until he returns up north where he doesn’t anticipate any problems plugging in.
“If I knew I was going to have these problems, I wouldn’t have bought the car down here,” he said.
As more and more situations like Least’s arise, condo boards and managers are seeking guidance on how to proceed.  “A week doesn’t go by when I don’t get a call from a condo manager,” says Anne-Lousie Seabury, electric vehicle program manager for Florida Power & Light Co. “They’re wondering where to start.”
The answer is not an easy one.
“I’ve worked with a lot of condos and everyone is different,” she says.
For their part, condo association managers and leaders say that there aren’t enough electric-car owners living in condos to make installations of community charging stations an issue.
That was the consensus during the October meeting of the Beach Condominium Association of Boca Raton and Highland Beach, according to Jack Fox, president of the group, which includes the managers, directors and officers of 63  communities.
“At this point the feeling is that there aren’t that many people with electric cars,” Fox said. “I think going forward, if electric cars become more prevalent, condos will respond to the demand.”
In the short term, he says, some condos are allowing owners to have charging stations in their garage parking spots, but they’re asking them to pay for the full cost of installation and the electricity they use.
That’s exactly what happened at The Yacht and Racquet Club of Boca Raton.
During the summer, the Rev. David M. Franco, O.S.F.S., a retired priest from Michigan living in a condo he inherited from his parents, purchased a pre-owned Nissan Leaf and went to his condo association to let the manager know he wanted to install a charging station that he could use in the garage.
“The manager said as long as I pay for the installation and my own electricity, it’s fine,” Franco recalls.
After doing a bit of research, Franco discovered that the costs of buying a Level 2 charging station — which can charge his Leaf in just a few hours — and installing it, were fairly affordable.
The charging station itself cost about $1,100, while running the necessary wiring from the garage electrical panel cost about $900.
In addition, Franco paid an extra $50 for a meter that measures the amount of electricity he uses. Every quarter he sends a check to the condo association, which pays for electricity used in common areas. The first check, written for four months, came to just $67.50.
While Franco’s is a success story, he says that the idea of a community-wide charging station —activated by credit cards — is not gaining much traction at the condominium.
“The problem is people have to look at electric cars not as a novelty but as a mode of transportation,” he said.