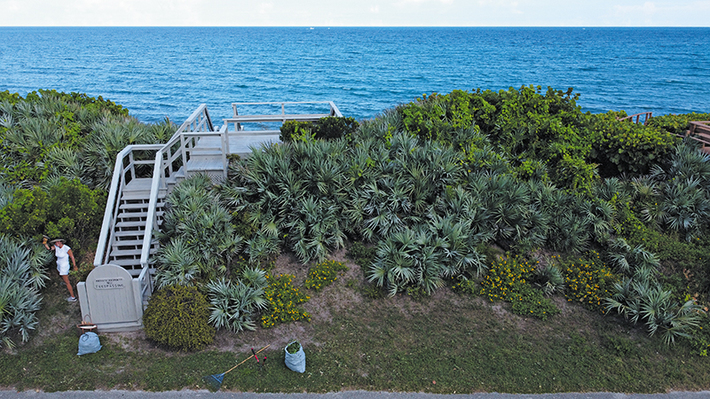 Kimberlee Pompeo sparked the starter kit idea as she took out invasive Scaevola taccada and vines from her Ocean Ridge property and put in natives. Photos by Jerry Lower/The Coastal Star

George Gann’s goal is to restore biodiversity to Palm Beach County’s barrier islands, one patch of land at a time.

To aid the process, interested landowners can purchase biodiversity starter kits created by the Institute for Regional Conservation under the auspices of its Restoring the Gold Coast program. A recent $100,000 grant from Impact 100 Palm Beach County helped fund the effort and educational campaign.

“These kits can be planted on virtually any piece of island property, including private residences and condo associations as well as office complexes, parks and medians. Every bit helps the area’s biodiversity,” says Gann, founder of the Delray Beach-based IRC.

Gann says evidence exists that during their history the barrier islands from Boca Raton to Lake Worth Beach have been home to more than 200 plant species.

These are native species that originated on the barrier islands without the help of humans. Those that didn’t originate here migrated naturally on the wind, the waves or on birds’ feet.

“We are not looking at species that people purposefully brought with them or that attached themselves to airplane wheels,” says Gann — thinking of all the bougainvillea, hibiscus and other showy exotics that have been imported from the Caribbean and Asia.

But over the years, much of our native diversity has been destroyed or lost as man developed the islands and beach erosion led to destruction of habitat.

Today, scientists know that these native plants remain important because, like art, they have intrinsic beauty, says Gann. They also can bind the soil with their roots, making the landscape more stable. And they make it more resilient in the face of hurricanes, plant diseases and insect pests.

Plus, as these native plants produce seeds, nectar, pollen and fruits, they create habitat for native birds, butterflies, insects and other animals on the islands.

The idea behind the starter kits is to return the native species and the resulting biodiversity to our barrier islands. Each of the four kits that are now offered includes five native species in small to medium pots.

One of these will be a “rare plant surprise,” an “oddball” species that might become available. And each kit is designed for a different coastal zone where wind, sun, water and sand uniquely interact.

The value of planting natives is visible on a 50-by-50-foot patch of beachfront property in Ocean Ridge owned by Kimberlee Pompeo, Florida Federation of Garden Clubs’ District X vice chair for the barrier islands.

Since 2013, she has been removing the invasive Scaevola taccada and vines that were crowding out the sea grapes and saw palmettos originally on the property. She has continued to add natives, and today her landscape boasts more than 40 species. 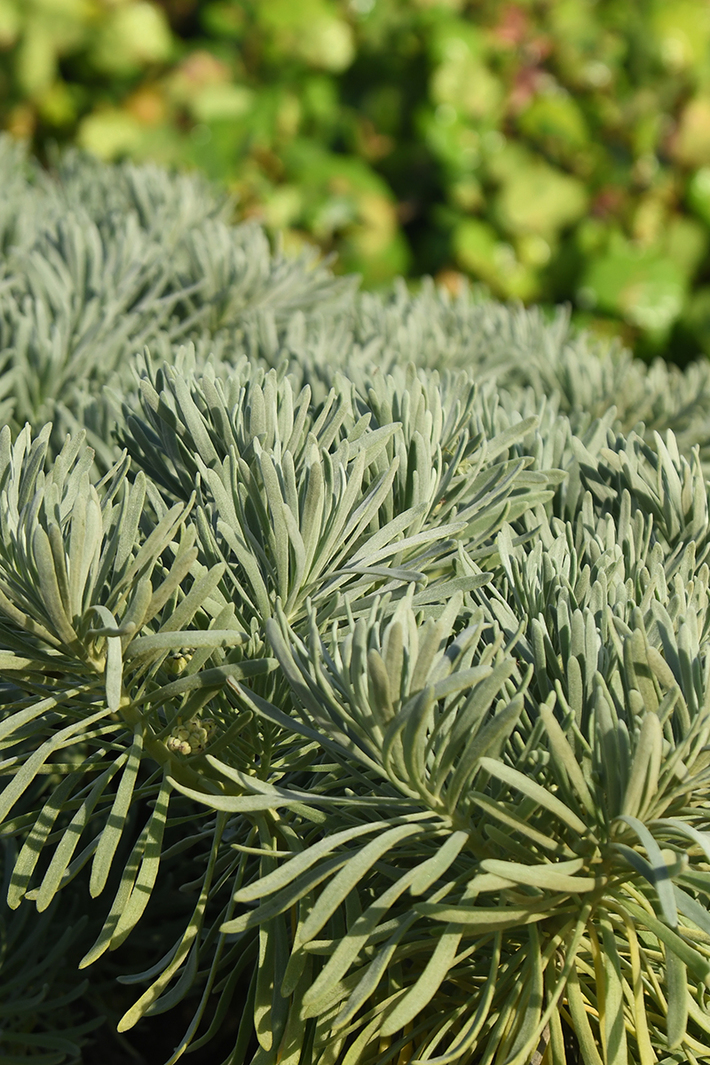 As she worked with Gann last spring, Pompeo’s interest in restoring her own property helped spark the creation of the biodiversity starter kits.

“They are a good way to return native species to the land in the way that nature intended,” she says.

On her foredune, she has planted the Beach Dune/Coastal Grassland kit ($75), including sea lavender that can survive the salty wind, cresting water and moving sand that energize this part of the dunescape.

Gann explains that this is the only kit that you necessarily need oceanfront property to plant. The others are more versatile.

For example, the Coastal Strand/Shrubland kit ($85) includes saw palmetto and yellow joyweed, which are typically found just behind the dune front where there’s less wind and salt spray. But Gann says the kit can be used just about any place on the barrier island where there is full sun. Also versatile, the Tropical Hammock/Coastal Garden Kit ($90) can be planted along a road or in a formal or informal garden. It fits any place on the island away from direct wind, says Gann. This kit includes the Jamaica caper-tree and marlberry.

There’s even a butterfly-attracting kit ($60) for people who enjoy these fluttery charmers. It too can be used any place on the barrier island protected from the wind. Gann hopes to soon have this kit available with plants that will do well on the mainland.

“The idea is to put together a few plants that deliver a lot of bang for the buck and efficiently return biodiversity to the barrier islands,” says Gann.

To purchase plants
Visit https://donorbox.org/restoring-the-gold-coast. Use one form for each type of kit you want. If you want multiples of the same kit, mark it on the form, then figure the multiple amount you will donate and write this in the comments area along with the number of kits you want. You will be contacted about picking up your purchase.