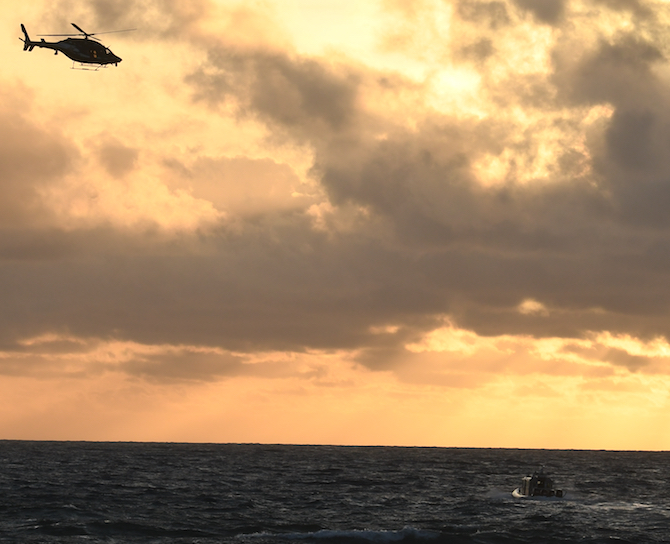 A Palm Beach County Sheriff's Office helicopter searches at dawn for a plane that disappeared shortly after 8 p.m. the previous evening off the Boynton Inlet. Photos by Jerry Lower/The  Coastal Star

Teams from the U.S. Coast Guard and the Palm Beach County Sheriff’s Office on Monday recovered the body of a 24-year-old pilot from inside a plane that crashed into the ocean south of the Boynton Inlet and settled almost intact on the ocean floor under 40 feet of water.

The plane, a single-engine Piper PA-28, disappear shortly after 8 p.m. on Sunday after taking off from the Palm Beach County Airport in Lantana headed for Merritt Island, according to the Federal Aviation Administration. A Mayday alert from the plane was received by the control tower at Palm Beach International Airport after contact had been lost with the aircraft.

A PBSO dive team prepares to recover the pilot's body from the crashed Piper PA-28.

A search Sunday night that included more than a half dozen local, state and federal agencies continued into the morning, and crews aboard a Sheriff’s Office helicopter spotted the plane less than a mile offshore. Dive teams recovered the body of a still unidentified man wearing a pilot’s uniform before noon. Earlier in the day, walkers on the beach recovered landing gear and what is believed to be an emergency beacon from the aircraft and turned them over to Ocean Ridge police.

The cause of the crash in under investigation by the National Transportation Safety Board, according to the Sheriff’s Office. 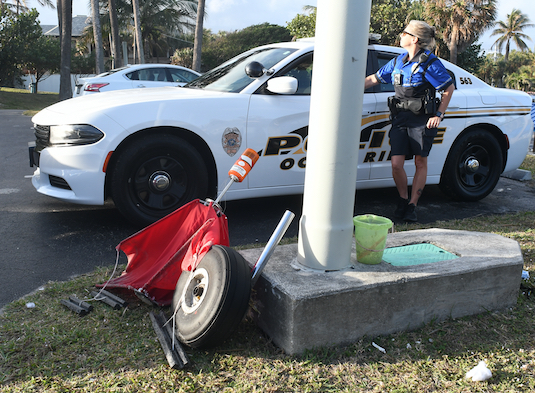 What appeared to be a plane tire and emergency beacon were discovered by people walking on the beach at Oceanfront Park and turned over to Ocean Ridge police.