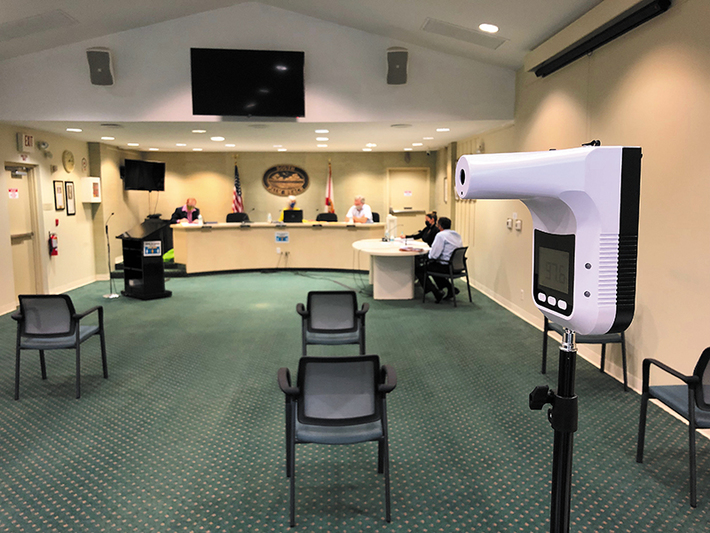 Resident Glenn Gromann thinks Boca Raton got it wrong when the city disregarded an edict from Gov. Ron DeSantis that required municipal governments to essentially abandon virtual public meetings and return to in-person meetings beginning Nov. 1.
Gromann, a frequent participant in city meetings, says the city is overstepping its bounds and, in the process, doing a disservice to people who want to see their government in action, up close and personal.
“I want to go to a public meeting and I want to be able to participate,” he said.
While Gromann argues that his City Council is exceeding its authority, the city and a growing number of other municipalities — including Boynton Beach and Palm Beach — say a combination of emergency powers invoked during the pandemic and the principle of home rule allow them to decide how their public meetings can take place.
In a resolution authorizing the continuation of virtual meetings after Nov. 1, Boca Raton cites a Florida attorney general’s opinion that local governments can meet without a quorum if “the in-person requirement for constituting a quorum is suspended during a state of emergency.”
Armed with that opinion, Boca argues that it can then invoke the Municipal Home Rule Powers Act and at its discretion suspend any in-person meeting requirements because it has declared a state of emergency.
The city also points out that although some attorney general opinions say local governments must have an in-person quorum at public meetings, no actual Florida law mandates in-person attendance.
“There are a lot of gray areas here,” says Glen Torcivia, a longtime municipal law attorney whose firm represents Highland Beach, Ocean Ridge, South Palm Beach and other towns.
So far no legal challenges have arisen to cities holding virtual meetings, but Torcivia says those governments could be taking a risk should a judge rule in favor of mandatory in-person meetings.
“If the meetings are determined by a court to be in violation of state law, then any action taken at those meetings could be determined to be invalid,” he said.
With that in mind, several municipalities are moving cautiously, with some choosing to hold only in-person meetings, while others are holding hybrid versions in which elected officials meet in person but make public participation available with programs such as Zoom.
In Delray Beach, commissioners were meeting in person with limited availability for public attendance, but late last month the city announced it would go back to virtual meetings effective Dec. 1.
Boynton Beach city leaders were the first to utilize the home rule provision to avoid meeting in person, deciding in late September to continue meeting virtually until the end of the year. In the interim, the mayor conducts meetings — with residents able to attend — at the City Hall community room while commissioners attend virtually.
In Briny Breezes, where elected officials now meet in person, Council President Sue Thaler is concerned about the rising rate of COVID cases. She is asking residents to write the governor, asking him to once again allow virtual meetings, and she plans to write him and local lawmakers herself.
Thaler says that while residents can attend the meetings or can listen by phone, council members aren’t afforded that option.
“We are the only ones required to be there in person,” she said, adding that the town’s attorney has advised against going back to virtual meetings.
In Highland Beach, which uses a hybrid setup with commissioners meeting in person and accommodating a small number of residents in person while allowing public comment in person and by Zoom, commissioners balked at holding their meetings virtually because of the possible legal ramifications.
They are, however, looking into the possibility of allowing two advisory boards — financial and natural resources preservation — to meet virtually since neither makes final decisions that could be overturned.
While safety is a key reason some municipalities are pushing to hold meetings virtually, logistics may also be a driving force, says Richard Radcliffe, executive director of the Palm Beach County League of Cities.
“There are some cities that because of their physical configuration, can’t hold in-person meetings,” he said.
In South Palm Beach, where in-person meetings take place in a small auditorium, spacing requirements could be difficult to meet, although two council members participated by phone last month and residents can do the same.
“When you’re trying to maintain six-foot social distancing the room fills up fast,” Mayor Bonnie Fischer said.
Boca, for example, was considering a move from tight chambers at City Hall to a larger room at another city building, if the council were to go to in-person meetings.
Gromann believes that space limitations and other obstacles should be overcome and in-person meetings should be held to accommodate people who may not be able to take part virtually.
“In order to participate, you have to have a computer, you have to have the internet and you have to know how to use the technology,” he said.
Torcivia, for his part, counters by saying that not everyone can attend in-person meetings.
“Aren’t you limiting in-person meetings to those who can get there?” he said, adding that hybrid meetings may be a way to address both concerns. Ú