(shown below) alerted him to an expired tag. 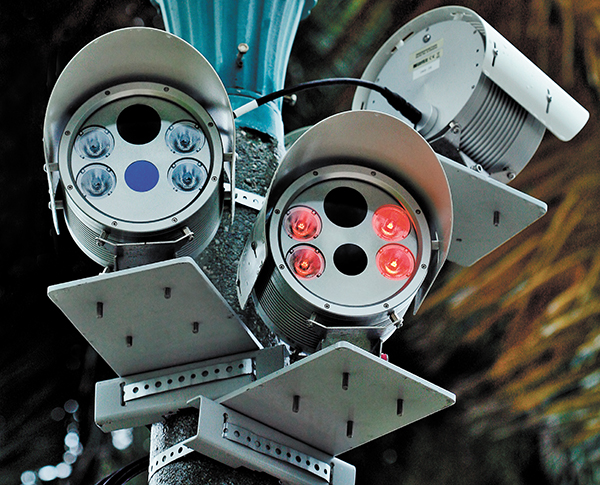 It started as a routine traffic stop on State Road A1A in Delray Beach, with the driver of the Nissan Altima pulled over for displaying an expired tag.
Before it ended, the driver, a 24-year-old from Pompano Beach, was arrested on charges of carrying a concealed firearm, loitering and prowling, violating probation and driving without a license. Police also found in his pocket a small tool used for smashing car windows.
The man might never have been stopped had it not been for the latest technology, permanent license plate recognition scanners, that have been working throughout the barrier island portion of the city since early March.
While the Police Department is cautious about announcing where cameras are, Police Chief Jeff Goldman acknowledges that they are strategically placed to ensure officers on patrol are notified when suspicious or stolen vehicles as well as those with expired or stolen tags enter the city.
“There is no way to get off or on the island without passing a camera,” he said.
For Delray Beach police, the license plate recognition system is helping the department do what it has always done, but more efficiently, Goldman says.
“It’s like having that many more eyes on the street,” he said.
The Pompano Beach man’s arrest proves Goldman’s point.
For months, Delray Beach has seen a rash of burglaries to parked vehicles, both locked and unlocked, and police have been especially vigilant in trying to track down and arrest suspected thieves.
On the morning of the arrest, a police officer was patrolling State Road A1A when he received a notification on the computer in his patrol car that a vehicle with an expired tag was heading toward him, according to a police report. On his screen was an image of the vehicle as well as a photograph of the tag.
Through his computer, the officer was able to verify that the tag was expired and then make his traffic stop.
The new web-based license plate recognition system, which includes local, state and national law enforcement data, can send information simultaneously to computers in patrol cars.
“This allows us to ‘be everywhere’ and not have to be everywhere,” Goldman said, adding that now an officer can be in the far end of his or her area and still know if vehicles with system-listed tags are coming into the area.
“This is a great investigative tool,” he said.
Detective Mike Shiner, who heads the license plate recognition project for the department, said he was able to use the system to dispel a burglary suspect’s claim that he was nowhere near the burglarized home by showing him a photo of his vehicle in the area at about the time police believe the burglary was committed.
“I could prove he was there,” Shiner said.
Delray Beach has been using a mobile license plate recognition system for years, but earlier plans to install permanent cameras in Delray Beach and other coastal communities hit a snag when the Florida Department of Transportation prohibited police departments from putting them on state rights of way.
Newer technology, however, now makes it possible for cameras to be positioned off the roadway and still get clear and reliable pictures of tags at a rapid pace. In Delray Beach, the majority of cameras are on city-owned property.
Other coastal communities, including Highland Beach and Ocean Ridge, are exploring the installation of license plate recognition systems. Manalapan and Boca Raton already have systems in place. Boynton Beach police use mobile license plate scanners but would not comment on if there are plans to install cameras at fixed locations.
Ocean Ridge Police Chief Hal Hutchins says he’s been investigating license plate recognition systems for several months and will bring the concept back to the Town Commission later this year as part of budget discussions.
Like several other coastal communities, Ocean Ridge has been exploring the use of license plate recognition systems for several years, even  before Hutchins’ appointment as chief just more than two years ago.
“The issue is still under consideration and it will be part of the budget process going forward,” he said.
In Highland Beach, Police Chief Craig Hartmann said his department could have license plate recognition technology in place within a few months.
“This is just another way to implement technology to create the safest environment we can for the community,” he said.
In the first four weeks of March alone, more than 400,000 tags had been scanned in Delray Beach.
The cost of installing the system is about $160,000, with the money coming not from taxpayers, but from the city’s law enforcement trust fund, which is based on revenue from sales of recovered vehicles and other items.
Goldman said the department plans to expand the use of permanent license plate recognition systems to other parts of the city in the near future.
“The installation on the barrier island is the first of many,” he said.