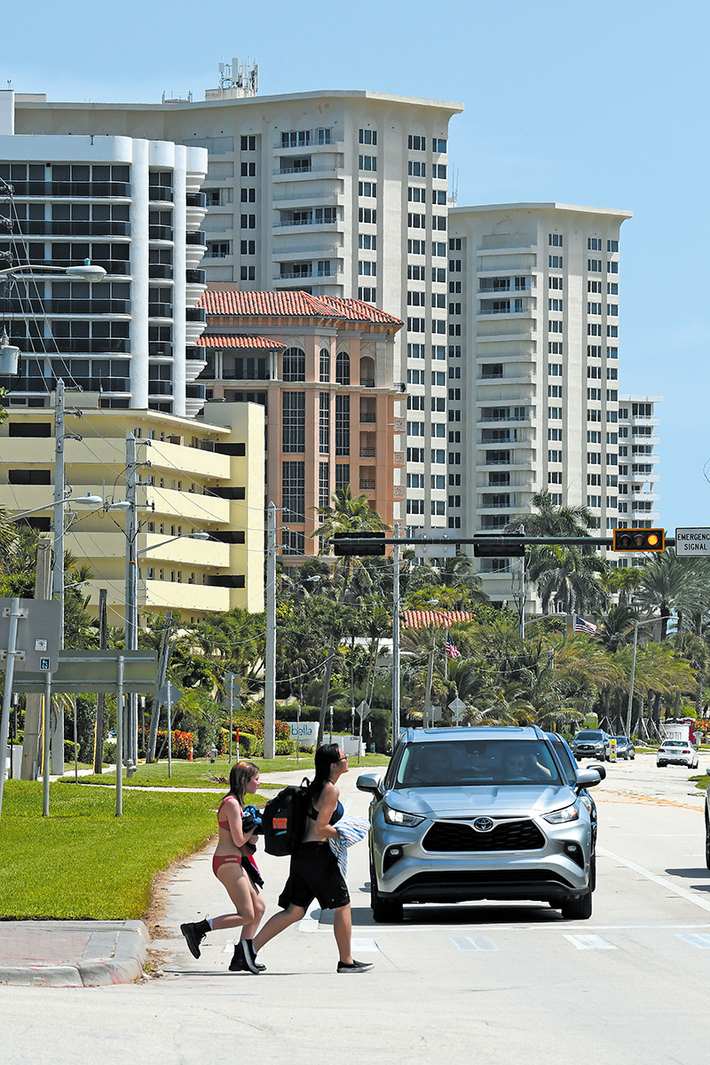 A1A is lined with condos in Boca Raton, where 77% of barrier island condos are 40 years or older. While the City Council considers a measure to inspect buildings taller than three stories 30 years after construction, the League of Cities is pursuing an even more rigorous standard. Jerry Lower/The Coastal Star

Related story: Plan targets buildings 25 or older for inspections, regardless of height

Residents bear rising costs of upkeep to live by water

The average age of more than 300 condominiums dotting the oceanfront and Intracoastal Waterway along the barrier island from South Palm Beach to Boca Raton is 44 years, a Coastal Star analysis of property records shows.
That’s four years older than Champlain Towers South, the 12-story Surfside condo building that collapsed on June 24.
In the three towns with the most high-rises — South Palm Beach, Highland Beach and Boca Raton — the average building age is 42 and the average height is seven floors, the analysis showed.

In Delray Beach, Manalapan, Boynton Beach, Gulf Stream and Ocean Ridge, the average age rises to 47 and the average height drops to three stories.
The 19-mile strip of richly landscaped estates and glossy high-rise condos is ground zero in Palm Beach County for the newfound focus on inspections and repairs born of the collapse in Surfside, which killed 98 people.
Nearly two-thirds of the 348 condos reviewed by The Coastal Star were built in the 1970s or before.
North Palm Beach structural engineer Don Chalaire said that most are supported by concrete columns that initially resist water, a seal that eventually gives way, allowing water and air to rust the critical rebar supports within.
“Every building we look at we see spalling damages that need to be repaired,” Chalaire said.
Local governments initially indicated they were preparing to require inspections for “threshold buildings,” those defined in Florida law as greater than three stories or 50 feet tall.
Such buildings make up nearly half of the buildings analyzed by The Coastal Star.
In all the communities, 58 buildings, or 17%, are east of State Road A1A on the ocean, aged 40 or older and more than three stories tall. Boca Raton has the most of those buildings, with 18, followed by Highland Beach with 16 and South Palm Beach with 11.
Experts say older coastal buildings close to the water, particularly those that don’t routinely conduct repairs, are most at risk.
But age alone is not a deciding factor, said Ben Messerschmidt, a forensic engineer at Epic Forensics & Engineering in West Palm Beach.
“It’s how well you maintain that 40-year-old building,” he said.
Overall, about a third of the barrier island condos are east of A1A, with the most in Highland Beach, 34, Boca Raton, 27, and Ocean Ridge, 19.
Local condo leaders, sporting hard-earned expertise in the nuances of concrete repair, say they are well aware of their responsibilities to assure routine maintenance, although they acknowledge it can take years to go from inspections to a completed restoration project.
One hurdle they all face: persuading condo owners to pay the bill.
“It’s the price you pay for living on the beach,” said Vito Licata, a past president at Highland Towers in Highland Beach.
The key is to keep up with degrading conditions, said Chalaire, who has worked in the area.
“If you do small projects more often, you’ll never have the big projects. What the condos are afraid of is the big projects,” he said. “But the costs are not optional. You have to do them.
“A lot of the boards don’t fix their buildings. It’s like being told they have cancer and passing on the surgery.”

The pitfalls of selling

At Wiltshire House in Highland Beach, a seven-story oceanfront condo facing a $2.5 million repair bill, some owners sought out a developer who would knock down the structure and rebuild. But they couldn’t find a willing buyer because the site would be limited to four stories under the town’s height cap, board President Becky Schmaus said.
And even then, they didn’t have the unanimous or near-unanimous support it would take to sell out.
The Wiltshire’s $2.5 million estimate — to replace windows and sliding glass doors, waterproof and paint the 25-unit condo — came before the coronavirus pandemic and now is likely to go up. But even at $2.5 million it amounts to $100,000 per unit.
Despite the potential expense, five units sold between May 2019 and June 2021 for prices ranging from $325,000 to $749,000, property records reveal.
Although the building is listed in property records as having been erected in 1974, it actually rose as a hotel in the 1950s, Schmaus said, and was converted to condominiums in the 1970s.
Recent buyers knew about the coming assessment and, like many longtime owners, didn’t want to sell, Schmaus said.
“There are so many homeowners that would never vote” for selling, she said. “We’re willing to pay the assessment to keep it safe and to keep it going. The view we have, you don’t get that with all the new” condo buildings.

Of the 97 buildings completed before 1970 along the 19-mile stretch of barrier island, 12 are eight stories or above: five in Boca Raton, five in Delray Beach and one each in Highland Beach and South Palm Beach.
Among the tallest, the 17-story Sabal Ridge at 750 S. Ocean Blvd. in Boca Raton, underwent $10 million in restoration work between 2016 and 2018, property manager Devin Wardell said.
Workers removed the garage ceiling, where water had been penetrating, and installed all new steel and concrete, Wardell said.
But the garage, although beneath the tower, isn’t the key structure holding up the 53-year-old building. The board restored foundational concrete columns in 2013, Wardell said, and is working with engineers now to rebuild balconies.
“It’s never-ending when you live on the ocean,” he said.

A January message on the Facebook page for Penthouse Towers, built in 1970, said, “It was a rough day today. No power, and concrete work still continuing.”
But the rough days were scheduled to be over by the end of July as the 11-story building on the ocean in Highland Beach completed a 21/2-year project, with new windows and restoration of all the concrete walkways and balconies, board President Skip Mongon said.
“We basically plan on concrete restoration every five years,” Mongon said. The board tested a small area five years ago and was impressed by the results. The cost is in the millions but owners are willing to pay.
“Any time you live on the water, it’s a big job,” he said.

How to spot weaknesses

For signs of trouble, look for gutters installed in garages to ferry dripping water away from cars or makeshift efforts to shore up weak spots, forensic engineer Messerschmidt said.
Large cracks in concrete can indicate spalling, when rebar within corrodes and expands so much it fractures the column.
Insurers are required to appraise a property to make sure policies cover replacement costs, but they can also exercise influence by jacking up rates on buildings with aging roofs or insufficient windows, compelling condo boards to make improvements, said Allison Hertz, a lawyer with Kaye Bender Rembaum who works with condos.
“It’s difficult to be a board member. The opposition to assessments is huge but they know they’ve got to do the right thing,” Hertz said. “The vast majority do it and they do it well.” Condos line State Road A1A in South Palm Beach, where the median age of the buildings is 47 years. One resident says ‘pretty much every building ... has been under scaffolding in the last few years,’ a sign of ongoing maintenance. The condo collapse in Surfside has put a bigger focus on inspections and construction safety. Jerry Lower/The Coastal Star

Matthew Horey, a petroleum engineer who lives at the Imperial House in South Palm Beach, isn’t concerned that the six-story condo is 60 years old.
Aside from the unlikely chance of a second major building collapse, he points to high-quality construction in the ’60s, “when people still cared about their work,” and to the building’s supports on “a forest of concrete piles.”
Since part of the building’s seawall collapsed in 2007 and high waves in 2009 threatened the building’s foundation, forcing an evacuation, he said the condo board set up a continuous maintenance program, including concrete repair.
“Living on the beach carries a cost,” he said. “The salt and water eat away at the concrete and steel.”
Neighboring condos get it, Horey said.
“Pretty much every building in South Palm Beach has been under scaffolding in the last few years. I’m glad to see people investing in maintenance.”

The Coastal Star focused its review on condos and co-ops on the barrier island, excluding townhomes, hotels and other commercial properties.
Completion dates, building names, addresses and in some cases building heights were pulled from Palm Beach County Property Appraiser’s Office records, compared when possible with town records, Google images and property and real estate websites.
Highland Beach has the most buildings with eight stories or more, at 40, with just 13 of them directly on the ocean. Boca Raton has 36 buildings topping seven stories, with 17 of them on the ocean. South Palm Beach has nine, seven of them on the ocean.
Ocean Ridge, Manalapan and Boynton Beach have no buildings topping seven stories and Gulf Stream has just one.
Just one in 10 of the condos along the barrier island went up after 1992, when Hurricane Andrew’s destructive path led to toughening of Florida’s building code.
Two-thirds of those 39 post-1992 buildings were over three stories and 10 were taller than seven.
The condo stock is oldest in Ocean Ridge, with a median age — at which half are older and half are younger — of 52 years among its 33 condos.
Buildings are newest in Highland Beach, where the median age is 40 and the median height is seven floors. That height is matched only by those in South Palm Beach (median age 47) and Boca Raton (median age 46).
Boca has the tallest towers, led by the 22-story twins called Ocean Towers I and II at 2800 S. Ocean Blvd., and Chalfonte North and South, at 500 and 550 S. Ocean Blvd.
Also topping 20 stories in Boca: Stratford Arms at 2600 S. Ocean Blvd., and Marbella at 250 S. Ocean Blvd. All six buildings were completed between 1973 and 1975, property records show.
The tallest building in Boca, the 27-story Boca Raton Club Tower built in 1969, is on the mainland.
All but four of the 28 condos in South Palm Beach are threshold buildings, taller than three stories. Only one, the seven-story 3550 South Ocean building completed in 2019, has been built since 1995.