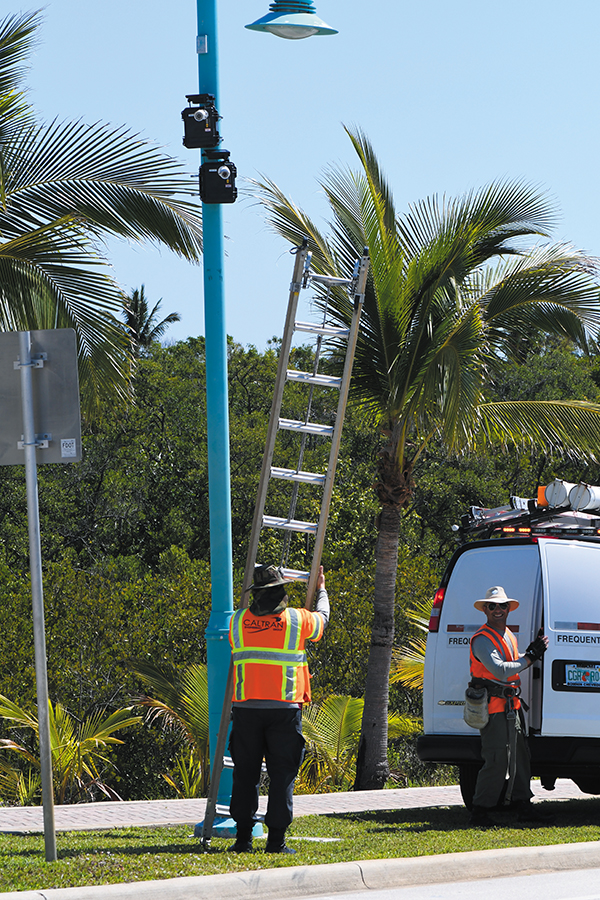 Workers with Caltran Engineering Group finish mounting a pair of cameras on light poles just east of the Ocean Avenue Bridge in Ocean Ridge. The cameras will be used in a study of vehicle, bicycle and foot traffic. Jerry Lower/ The Coastal Star

The Florida Department of Transportation wants to know how safe South Florida bridges are for pedestrians and bicyclists so it can begin planning improvements for bridges with the biggest needs first.
Recently, contractors working with FDOT installed cameras on the Ocean Avenue bridge over the Intracoastal Waterway between Boynton Beach and Ocean Ridge to measure pedestrian, bicycle and vehicle usage. FDOT is also taking inventory of pedestrian and bicycle amenities such as sidewalks and bike lanes.
It will then compile the information from the Ocean Avenue project with information collected at 78 other bridges over the Intracoastal in a five-county region stretching from Broward County north to Indian River County.
That data will then be used to determine which bridges should be considered first for pedestrian- and bicycle-safety improvements and which improvements should be applied to which location, according to Thomas Miller, a bicycle and pedestrian safety program specialist for FDOT.
The improvements, Miller said, will be broken down into short-term, mid-term and long-term enhancement.
“Short-term improvements may include installing new or additional pavement markings, and installing new or additional signs,” Miller said.
Long-term projects, for example, could include modifications to existing sidewalks or installing plates over grates on bridges that are difficult for bicycles to cross.
Many of the decisions on what improvements will be made where will depend on an analysis of each bridge to determine whether it can handle additional weight or has space for other improvements.
The project, Miller said, is the result of concerns expressed by residents regarding the safety of bicyclists and pedestrians on bridges over the Intracoastal.
Data collection should wrap up this month; and some short-term improvements could be implemented before the end of the year, Miller said. Mid- to long-term improvements could be incorporated into a five-year work program as schedules and resources allow.