Graduation day: Sarah Dagher hugs her mother, Joumana, as her father, Salam, looks on following Gulf Stream School’s graduation ceremony on June 10. Sarah recorded a 99.5% average during her final year at the school, one of the best scores ever recorded there. The Daghers live in Ocean Ridge. Jerry Lower/The Coastal Star

Some families do their homework: Get kids into school first, worry about buying a house later

Beth and Jake Hollinger don’t know exactly where they’ll be living when they leave their Philadelphia home in a few months in order to enjoy the tropical Florida lifestyle.
They do, however, know exactly where their two grade-school-age children will be getting an education.
“The priority was to get into Gulf Stream School,” says Beth Hollinger, explaining that finding a home in coastal Palm Beach County took a back seat to getting the kids into one of the area’s prestigious independent schools. “We’ll just deal with finding a home later.”
As a significant number of affluent families have undertaken a pandemic-driven migration to Florida, they are discovering that only so many slots are available for the high-end private-school educations they want for their children.
Area private schools that once struggled to fill classrooms are now hitting record enrollments and creating waiting lists that can stretch into the hundreds.
Gulf Stream School, for example, is at capacity and has a waiting list with the names of about 70 children on it. Enrollment is at the highest it has been in the last several years and is up about 30% from 2019, prior to the pandemic, according to school leadership. About half of all new applicants come from out of state.
“Next school year we’ll have more students than we had this school year and this year we had more students than we had the year before,” said Michael Mahady, Gulf Stream’s director of admission.
The demand for slots in South Florida private schools stretches far beyond Gulf Stream School, with more and more schools forced to turn students away — at least for now.
A recent story from Bloomberg.com reported that enrollments at 15 private schools in coastal South Florida are up 14% on average over the past two years, compared with a 1.7% increase across the country. Those numbers come from the National Association of Independent Schools.
At Saint Andrew’s School in Boca Raton, with an enrollment topping 1,300, the Bloomberg report said applications have increased 20% in the last year-and-a-half and the waiting list for the pre-kindergarten through 12th grade school has swelled to more than 200 students. 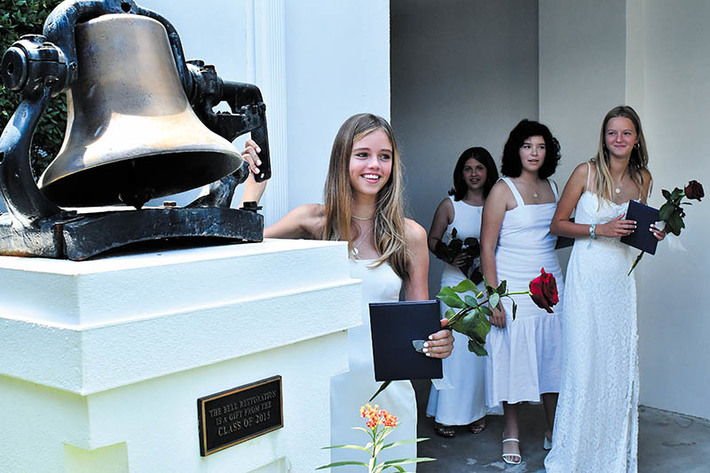 After the graduation ceremony in June, Estella Postma rings the school bell as classmates (l-r) Barbara Gamboa, Gracie Robinson and Lily Thomas wait their turns. Ringing the bell at the beginning and end of the school year is a tradition for eighth-graders. Jerry Lower/The Coastal Star

One of the main factors limiting the number of students enrolled in these private schools is a commitment to small class sizes. At Gulf Stream School, for example, classroom sizes are usually limited to about 15 or 16 students.
The graduation in June of the entire eighth grade included just 28 students.
While annual tuition at many of these exclusive schools can be pricey, it doesn’t seem to be affecting applications.
At Gulf Stream School, tuition ranges from $18,735 a year for a half-day of pre-K for 3-year-olds to $29,995 for students in the fifth through eighth grades. At Saint Andrew’s School, tuition for students in kindergarten through eighth grade can top $32,000 a year, according to the school’s website.
Gulf Stream School also has a cap of 250 students as a result of a 1994 agreement with the town, and Gulf Stream town records show that agreement remains in place.
For the school, maintaining a strong relationship with town officials as well as with the wider community is a priority even as enrollment hits maximum levels, says Head of School Gray Smith.

“Our discovery is that we can continue to provide — in fact augment — the sense of community and family, and the abiding traditions that make up the Gulf Stream School student, and family experience when the school’s classrooms are at capacity,” he said. “However, we acknowledge that there is a tipping point between school size and achieving our mission, and we have no intention of crossing that line. Our number one intention is to be the best neighbor we can be.”
The cap has meant that in rare instances families have delayed their moves south, more evidence that they are prioritizing the children’s education over the purchase of a home more than ever before.
Pascal Liguori of Premier Estate Properties recalls the recent case where a sale he was handling on a $6-million-plus barrier island home fell through because the deal was contingent on the family’s two children getting into Gulf Stream School.
When that didn’t happen, the deal fell through.
“They postponed the move until they could get them in there,” Liguori said. “For them, it was Gulf Stream School or nothing.”
Steven Presson, luxury Realtor of the Corcoran Group, says that situation is rare. Instead, he says, many of the parents he’s dealt with come with a list of three or four schools that they will tour.
“The nice thing about South Florida is there’s not just one great private school, there are a whole bunch of them,” he said. “In the Palm Beaches, we’re really lucky.”
In Delray Beach, St. Vincent Ferrer Catholic School is seeing increased enrollment and waiting lists in certain grades. For next year, the school’s enrollment is about 415 students.
The school has waiting lists for its pre-K 3 grade as well as its third, sixth and seventh grades. Other classes had availability of only one to three spaces as of mid-June.

Jake and Beth Hollinger enrolled children Kaje and Elason at Gulf Stream even before they found a house in Florida. Photo provided

The Hollingers — the Philadelphia couple who will be sending their son Kaje, 6, and daughter Elason, 9, to Gulf Stream School next year — brought their children with them as they looked at a handful of private schools.
The last stop was at Gulf Stream School and it was a hit with everyone in the family. Even the children were smitten by the openness of the campus and large sports fields.
“It just felt magical,” Beth Hollinger said. “We didn’t know we were ready to move until right then and there.”
Falling in love with the school was one thing; getting in was another. Fortunately for the Hollingers, it had openings in the first and fourth grades when they applied earlier this year. Some students in lower grades gather on the first day of the school year at Gulf Stream School. Rachel O'Hara/The Coastal Star

At Gulf Stream, as well as other prestigious independent schools, finding an open spot in some grades is easier than in others. Getting your child into pre-K or kindergarten classes at a South Florida school is tougher because of demand from parents who want to start their children at that particular school.
“We feel lucky,” Beth Hollinger said. “We felt lucky that we were even able to secure a tour.”
The Hollingers had the advantage of being familiar with the area, since they vacationed here regularly for the past decade.
“We always wanted to head this way, but the pandemic pushed up the timeline,” Beth Hollinger said, adding that virus-related shutdowns were especially difficult for her children, who felt cooped up at home as a result of COVID-related restrictions. “The pandemic put a real damper on their school experience.”
In addition to Gulf Stream’s physical layout, the Hollingers felt comfortable with the school’s small size and family focus, which they say is similar to the school their children were in previously.
Those factors gave Gulf Stream an advantage during the height of the COVID restrictions, making it possible for the school to remain open for in-person classes when many others had shifted to online learning.
Just a month or two after everything was shutting down in 2020, Gulf Stream opened its summer camp. A couple of months later, school was back in session with real classes.
“We’ve had families who started this year and it was the first time in two years that the children had actually been in a classroom,” Smith said.
The layout of the school, with plenty of open space, made it possible for classes to be held outdoors and for classrooms to be reconfigured to keep kids safe.
Gulf Stream also brought a pediatric nurse practitioner on board and offered voluntary COVID tests, thanks to a gift from a parent. The school then opened up the testing to other family members.
The fact that Gulf Stream School could offer children a chance to play outside at a time when playgrounds up north were closed was attractive to many parents and remains attractive to the Hollingers — and their children.
Beth Hollinger says her 6-year-old didn’t want to go back to the Northeast after their last vacation, which included the visit to Gulf Stream School.
“He loves being in Florida,” she said.