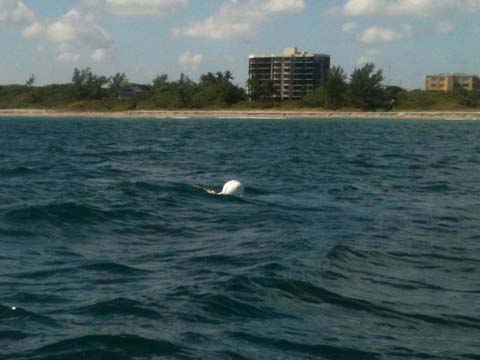 The goal is to reduce anchor damage and allow more sponge, sea fan and hard coral coverage that increases the habitat for fish, lobsters, sea turtles and other reef species. The new buoys were installed by Palm Beach County’s Department of Environmental Resources Management in partnership with the Florida Fish and Wildlife Conservation Commission and the Wildlife Foundation of Florida.

“Anchors that are dragged across our reefs are a very serious problem,” said Janet Phipps, coral reef ecologist for the county’s Department of Environmental Resources Management. “We don’t have wide, extensive reefs like those south of us and in the Florida Keys. Our reefs are more concentrated close to the shore near The Breakers hotel and east of Boca Raton.”

Boaters now can tie up at three buoys over an artificial reef at Diamondhead Radnor Park in Jupiter; three buoys in the Singer Island area just north of the Palm Beach Inlet; six at The Breakers hotel, which is the center of a 4-mile-long natural reef; six south of The Breakers due east of Mar-a-Lago; and the 10 buoys near the Boca inlet.

The destruction caused by anchors is killing coral already suffering from pollution. Passengers flying out of Palm Beach International Airport can easily see the dark water of the Intracoastal Waterway laden with pesticides, fertilizers and other pollutants flowing through the inlets and fanning out into the ocean.

“Our reefs are very challenged. The problem is just too many people. Have you ever watched the outgoing water into the ocean? It’s pretty nasty. That pollution is jeopardizing the reefs,’’ Phipps said. 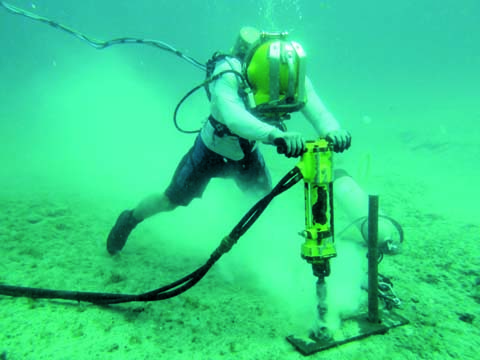 A diver uses a jackhammer to install one of 28 new mooring buoys
placed at popular boating spots in Palm Beach County.

The buoys will help keep the corals and other sea life safe from anchor damage. Set into exposed limestone close to the reefs, the buoys are popular with boaters who have to get to the ones near The Breakers early on Saturday mornings because they fill up quickly, she says.

“There are a lot more buoys in Broward County, Miami and the Keys, and we’ve seen how buoys really do protect the reefs,” she said. “The biggest expense is long-term maintenance. Boaters can make donations through the Wildlife Foundation of Florida.”

Phipps cautions boaters to properly tie up to the buoys. Careless or inexperienced boaters often loop the buoy pick-up line over a cleat on the boat.

The pick-up lines are too short for that purpose, and the boat ends up damaging the buoy, which costs about $350 per system, not including labor, she said. Boaters should tie their bow line to the buoy pick-up line. The buoys are not to be used for overnight stays.

The six buoys at The Breakers have been replaced about once a year because of damage caused from improper tying and from propellers.

The cost for installation, monitoring and annual maintenance of the new buoys is about $97,000 and is paid by a Florida Fish and Wildlife Conservation Commission boating improvement program grant and private donations.

At a Boca Raton City Council Workshop Nov. 26, Phipps told council members the annual cost of maintenance for Boca’s 10 mooring buoys would be about $9,500 including $5,500 for labor and in-water work and $4,000 for replacing buoys.

“We’re finding about an 80 percent loss of buoys each year. They just disappear,” she said, adding that four buoys in north county were lost to Sandy.

She expressed hope that the city of Boca Raton would assist in paying for Boca’s buoys. “If we run out of money we will have to remove the buoys,” she warned  Ú