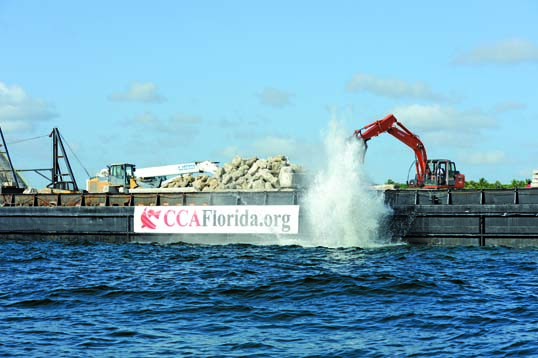 Tons of limestone boulders and recycled concrete slabs were sunk to re-create the Goggle Eye Reef.

About 700 tons of limestone boulders and scrap concrete were dumped into the ocean about a half-mile northeast of the Boynton Beach Inlet to rebuild a natural reef that had been degraded by storms and shifting sand.
Workers on a tugboat and a 200-foot barge spent most of the day Sept. 15 at the reef site. J.D. Dickenson of the South Palm Beach chapter of the Coastal Conservation Association Florida, which spearheaded the project, and Palm Beach County Environmental Resources Management engineers monitored the reef construction.
CCA Florida raised $85,000 in grants and donations to build the reef, which will provide ideal habitats for fish on the natural limestone Goggle Eye Reef, which was covered by sand. Most of the money for the project came from the Community Foundation for Palm Beach and Martin Counties, which contributed $55,000, and Impact 100, which awarded a grant of $17,000. The project also received funding from CCA’s Building Conservation Trust Fund, the Merrill G. and Emita E. Hastings Foundation, and individual contributors.
“I think it’s important to recreate habitat that used to be here by building artificial reefs that will be sustainable. The more of these we can plop down the more marine life we can create,” said Dickenson, who is the founder and past president of the South Palm Beach chapter of the CCA Florida.
The new reef, which is about 1,000 feet offshore in 15 to 20 feet of water, will be an underwater attraction that can be easily seen by snorkelers. Covering about a quarter-acre, the reef is 5 to 6 feet tall at the highest spots.
The Palm Beach County Environmental Resources Management department researched the project and oversaw the placement of the boulders.
The shallow reef, a “step reef,” will immediately attract marine life —  its nooks and crannies serving as homes and stop-off points for fish such as snook and  tarpon, juvenile reef fish including snapper and grouper, and numerous other marine species such as crustaceans, turtles and corals.
“There are probably baitfish on it right now,” Dickenson said the day after the barge unloaded the boulders.
Eventually the reef will recruit sea fans and live corals, he said. Based on other artificial reefs in Palm Beach County, it’s expected to attract as many as 60 species of fish.
“It will be a bit of an oasis in the desert, a magnet for marine life,” he said.
Artificial reefs are badly needed from Palm Beach to Boca Raton, since many natural reefs have been eroded and covered by sand. There are more inlets in the southern part of the county coastline and more beach renourishment projects, which dump sand on the reefs, Dickenson said.
Goggle Eye Reef was a productive reef that was completely smothered by sand 10 to 15 years ago.
CCA, a marine conservation organization made up primarily of anglers, has 100,000 members nationwide, and educates the public on conservation of marine resources. The CCA Florida has 10,000 members statewide in 29 local chapters.
Dickenson, an attorney with Cozen O’Connor, grew up in Boca Raton and lives in Delray Beach. He has been a lifelong snorkeler and angler. He and wife, Maggie, daughter Sophia, 10, and son Henry, 7, plan to snorkel the new reef frequently and watch it grow.
“We will monitor the impact of the reef on a monthly basis with underwater video and photography over the coming months and years,”  he said.
The site is permitted for an artificial reef by the Florida Department of Environmental Protection and by the Army Corps of Engineers, which will also monitor the growth of the reef.
The South Palm Beach chapter of the CCA Florida plans to construct other artificial reefs.
“We’re constantly evaluating new habitat and hoping to build more reefs,” Dickenson said. “The next ones may be off Delray Beach and Boca Raton. We just have to raise more money.”