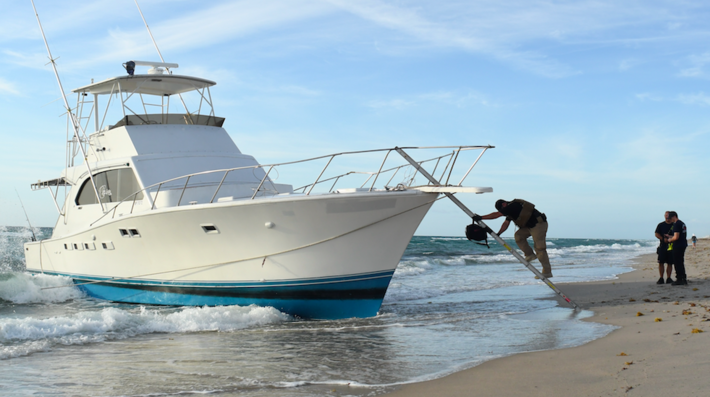 Jason Miele, a marine interdiction agent with Customs and Border Patrol, retrieves evidence from the fishing boat carrying the migrants that ran aground at the St. Andrews Club and Gulfstream Park. Jerry Lower/The Coastal Star

Twenty-nine Haitian nationals were arrested early Monday after the 45-foot sport fishing boat they were in came ashore at Gulfstream Park and the St. Andrews Club.

Border Patrol agents said two of the people aboard the boat were taken to the hospital for treatment. One of those individuals was released to Border Patrol custody while the second person remained hospitalized with non-life threatening issues.

Those arrested were taken to the Border Patrol station in West Palm Beach where they were interviewed and processed for removal.

“The U.S. Border Patrol is investigating this case alongside our Department of Homeland Security partners and will seek to prosecute any individuals who are identified as smugglers,” Border Patrol Agent Adam Hoffner said in a written statement.

Authorities said the sport fishing boat apparently ran into trouble and sent a distress call prior to making landfall straddling the property line between the park and St. Andrews.

“This is a treacherous journey from Haiti and we continuously warn migrants about the dangers associated with traveling by sea,” Hoffner said.

Teams from the U.S. Coast Guard were also involved, issuing an urgent marine information broadcast to notify local mariners to assist if they could. A boat crew was dispatched from the Coast Guard’s Lake Worth Inlet station and a cutter was also sent to the area. A helicopter was dispatched from Miami to help as needed and to make sure all aboard the boat remained safe until Border Patrol agents were on the scene.

“We appreciate the support from our state and local law enforcement partners who were able to help us safely secure the scene,” Hoffner said.