Caryn Foltz has sketched images of the area

and paired them with her thoughts that day in a book she calls SandScript. 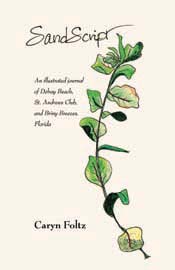 The cover of Caryn Foltz’s book of drawings

and essays is derived from her first sketch.

The first sketch in her book was done on Nov. 16, 2008, at 8:30 a.m., when the temperature in Gulf Stream’s public park was 68 degrees.
The last one arrived on April 5, 2015, at 9:15 a.m., a drawing of the sign outside Dock Square Clothiers on East Atlantic Avenue in Delray Beach. The temperature that morning was 73.
In between, the simple blue sketchbook that Caryn Foltz bought at Hand’s Stationers to reunite with her love of art became a weapon, too.
“The doctors tell me that remaining creative is a way to battle it,” she explains.
When you call to ask if she’ll grant an interview about her sketches, she agrees, then politely adds, “I have a memory problem.”
Seated at a patio table overlooking the golf course at St. Andrews Club, she mentions “my difficulty” — and then, after you’ve chatted a bit, confides that, because the disease is progressive, she thinks of it as a journey — “the road to Alzheimer’s.”
“What I have happens to a lot of people,” she says, “and nobody knows what causes it.”
She is a modest and private person, you sense, a 76-year-old woman summoning the bravery to go public about her diagnosis because she wants to shine some light in the darkness and fear that surround Alzheimer’s disease.
If a question seems perhaps too personal, she turns to Henry, her husband of 55 years, and they briefly discuss her concerns while the sketchbook rests on the table between them. 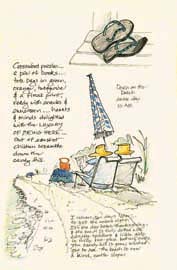 Caryn Foltz shares a memory of a day on the shore. 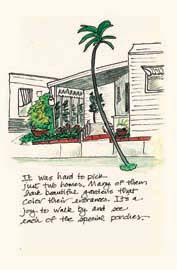 Sand Script: An illustrated journal of Delray Beach, St. Andrews Club and Briny Breezes, Florida, is a tropical delight, page after page of colorful sketches as light and breezy as the local beaches, lazy foliage and street scenes Foltz captures with unmistakable talent.
Her drawings not only look like our coastal communities, they feel like them, too, and each sketch is accompanied by a few words marking its creation. 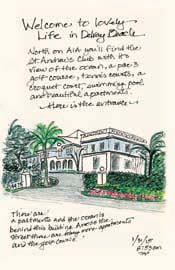 In Gulf Stream that first morning, Foltz welcomed the end of temperatures in the 90s.
“Cool air bristles the skin. The Sea Grape leaves sparkle beneath a smiling sun. Slow waves calmly tapping their way to shore inspire meditation.”
Here’s the little courtyard that houses Ciao, the venerable Atlantic Avenue café.
“… the shops and courtyards are small, cozy, low, dated and comfortably shabby.”
She’s captured perfectly the spirit of the Briny Breezes clubhouse, the Seaside Deli and Nomad Surf Shop.
Cason Cottage and Starbucks, the Delray Beach pavilion and Pineapple Grove arch.
And, of course, The Colony Hotel:
“When I walk down Atlantic Avenue, a lot of the names I sketched are gone and it makes me really happy that I sketched them.”
Caryn Foltz’s sketches drift on waves of gentle nostalgia, the work of a woman who first came to Delray Beach in the 1950s, a child vacationing from Cleveland.
Her father, R. Franklin Outcalt, was a prominent architect who later designed the Barr Terrace condominium on Atlantic Avenue.
“I would watch my dad drawing at home,” she remembers, “and I guess it just came into me. I have two older brothers and neither one had any interest in architecture, but I was always creating something.”
As a student at Skidmore College, she signed up for an art class one September, and when the students’ work was displayed that October thought, “Oh, no, I’m not anywhere near this!”
She finished the art class, but never took another, and sketching became a sometime thing until she and Henry retired to the St. Andrews Club in 1998.
“Back in the ’50s it was called Dull-Ray,” she remembers. “You could throw a bowling ball down the street and nobody would ever know. But when Henry and I came back — boy, how it had changed!”
And so she began sketching again, holding back with pencils, pens and paper those inevitable changes overtaking the no longer dull town of Delray Beach.
“I always start with a pencil, and then I come home and look at what I’ve done and make a few changes,” she says, “and once I’ve got it how I want, use black ink and colored pencils.”
The Office restaurant and bar. Her four favorite homes in Del-Ida Park. And of course the golfers at the St. Andrews Club itself, home for the past 17 years.
The pen became a sword in her battle with Alzheimer’s, and then suddenly it’s 9:15 a.m. on April 5, 2015. She’s sketching the stylized signs of Delray’s couture shops, ice cream parlors and resort boutiques, and her blue book is full.
“I’m delighted that many places are still thriving, e.g., The Colony Hotel, Trouser Shop & Delray News.”
Caryn Foltz is thriving, too. Not long ago, she told the women in her weekly bridge club about the road she is traveling, and her eyes fill with gentle joy as she remembers their response. They told her, she says, that if and when the day comes when she can no longer play, they still want her company at the game. The game is not why they want her around.
She and Henry are having the sketchbook privately printed by Middle River Press, with an initial run of 50 copies to share with family and friends.
“And now I’m thinking about what’s the next thing I can work on. The other day when I was in Hand’s, I bought another sketchbook.
“It’s green,” she says, “but it’s a nice shade of green.”