after observing them violating a law regarding road-sharing. None of the cyclists received a ticket.

Highland Beach Police Officer Paul Shersty was driving south along State Road A1A one Saturday morning when he noticed a car continue through a dedicated crosswalk just as two pedestrians began to cross.
Shersty turned on his lights and pulled the car over.
Rather than write a ticket, he issued the driver a verbal warning.
The verbal warning was one of three issued to motorists during targeted enforcement efforts along State Road A1A last month coordinated by the South Florida Safe Roads Task Force. 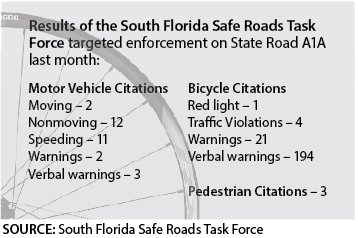 The enforcement efforts, conducted mainly during a Saturday and Sunday morning, were part of a weeklong education campaign designed to raise awareness of the need for motorists, bicyclists and pedestrians to safely share the road. The effort involved police officers from towns and cities up and down the coast, as well as Florida Highway Patrol troopers.
“The campaign was not designed to write tickets,” said Tara Applebaum, spokeswoman for the Safe Roads Task Force and executive director of Dori Saves Lives/The Dori Slosberg Foundation. “All of the agencies involved in the task force are looking to create awareness of major issues that are causing serious injuries and fatalities.”
To help get the word out, the task force placed several message boards along State Road A1A during the week of Dec. 7 to let those using the road know that a vehicle-, bicycle- and pedestrian-safety campaign was in effect.
During those targeted efforts, law enforcement officers wrote 25 citations to motorists, five citations to bicyclists and three tickets to pedestrians.
Officers also wrote 21 warnings to bicyclists and issued close to 200 verbal warnings to them, most coming when officers or troopers pulled over packs of riders.
During one stop in Highland Beach, Trooper Paul Croy pulled over a group of more than 30 bicyclists, reminding them of the need to share the road and not impede the regular flow of traffic whenever possible.
“We’re here to protect you all,” he told them.
Later, Croy and other troopers pulled over a pack of bicyclists after one of the troopers said he saw some of them taking up much of the southbound lane of State Road A1A and impeding traffic. Two citations were issued.
The leader of at least one bicycle club, zMotion, says his group has made an effort in recent years to ensure riders share the road and remain safe.
“zMotion and a lot of the other clubs have really scaled back and focused on obeying the laws,” says Chris Hoch, the group’s executive director.
Hoch said that each group of riders has a ride captain — or more, depending on the size of the group — who reviews the laws with the group and works to make sure the rules are being followed. “The captains are the ones who make sure everyone is safe and not breaking any laws,” Hoch said.
Task force members say they plan to conduct additional enforcement efforts later this year and are discussing the possibility of hosting a safety fair.
“Human nature is to get complacent, so we’re continuing the education process for everyone involved,” said Highland Beach Police Lt. Eric Lundberg, one of the founders of the task force.