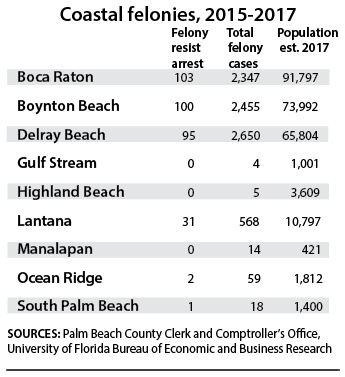 By Noreen Marcus and Michelle Quigley

Serious crime is uncommon in Palm Beach County’s coastal towns, and cases of resisting arrest with violence are about as rare a sight as white whales.
So the upcoming trial of former Ocean Ridge Vice Mayor Richard Lucibella on felony counts of resisting arrest with violence and battery on a police officer has drawn considerable attention.
Whatever happened Oct. 22, 2016, on the patio of Lucibella’s beachfront residence on Beachway North is scheduled for debate at a trial set to begin in late February in West Palm Beach Circuit Court. Judge Meenu Sasser has reserved an entire month for the proceedings.

Lucibella, a 64-year-old health care executive, pleaded not guilty to all charges.
The case’s notoriety and impact on Lucibella, who resigned from office Dec. 7, 2016, once moved Ocean Ridge Mayor Geoff Pugh to say, “Does it make the town look bad? I guess, yes.” Pugh could not be reached for comment for this story.
Lucibella responded to the obvious question — why hasn’t this case been resolved?— in a text message. He wants a trial. “I’ll gladly take my chances with that.”
“I have refused all overtures as to a plea,” Lucibella wrote. “Ocean Ridge’s police leadership has had their turn at bat. They may have succeeded in destroying my reputation to cover up their incompetence, but they’ll never get the chance to do it to another resident.”
Resisting arrest cases represent a tiny subcategory of total felonies over the past three years in Ocean Ridge and four nearby coastal towns, according to data from the clerk and comptroller of Palm Beach County. There was one in South Palm Beach, population 1,400, and there were two in Ocean Ridge, population 1,812. Period.
Why so few?
“Possibly it’s a reflection of the general crime rate in those jurisdictions,” said Mike Edmondson, spokesman for the office of Palm Beach State Attorney Dave Aronberg.
Ocean Ridge Police Chief Hal Hutchins had another suggestion. “I would like to believe it’s because we use a lot of de-escalation skills and people skills and perhaps we just don’t have as many people that present themselves in that fashion as other communities do,” he said.
In the South Palm Beach case, a 30-year-old man was originally charged with felony and misdemeanor resisting arrest, reckless driving and driving with an invalid license. He pleaded guilty to misdemeanor resisting arrest and the driving violations on Oct. 20, 2016.
In Ocean Ridge there have been Lucibella’s case and that of Christian Stewart of West Palm Beach. On May 20, 2017, an Ocean Ridge policeman saw Stewart jogging on A1A. Because Stewart fit the description of a suspect the officer was seeking, he tried to stop Stewart.
The situation escalated when Stewart “took a fighting stance,” Officer Richard Ermeri wrote in his arrest report. Ermeri “believed that he was going to strike me at any moment.” Stewart turned out to be the wrong man and no one was hurt.
Stewart was charged with both felony and misdemeanor (nonviolent) resisting arrest. Eventually the charges were dropped and Stewart paid $50 to cover prosecution costs.
Ermeri was the same officer who had, seven months earlier, responded to calls from Lucibella’s neighbors that they heard gunfire coming from the direction of his house. Ermeri, Officer Nubia Plesnik and Sgt. William Hallahan found Lucibella and Lt. Steven Wohlfiel on the patio with five spent shell casings.
Both men were “obviously intoxicated,” the police reported. They confiscated a .40-caliber Glock handgun and a smaller pistol from Lucibella, a weapons enthusiast who publishes a gun magazine.
Accounts differ about what happened after that. The officers said Lucibella verbally and physically resisted arrest and had to be taken down to the ground to be subdued. Lucibella’s attorney Marc Shiner said police overreacted and used excessive force, which is a legal defense to the charge of battery on a law enforcement officer.
Lucibella, who reportedly was wearing glasses, suffered an injury to his eye that required medical attention.
According to Plesnik’s pending civil suit against him, her shoulder was hurt when she helped subdue him. Ermeri also said he was hurt in the scuffle.
Their boss, Chief Hutchins, said in an interview last month that he could not say how badly the officers were injured — “I’m not a doctor.” He said they have been back on duty for some time and that, contrary to demands by Shiner, there has been no Florida Department of Law Enforcement investigation of their actions in the Lucibella incident.
An Internal Affairs investigation determined that the Glock was Wohlfiel’s personal property. His lawyer Ralph King of the Palm Beach County Police Benevolent Association has complained that the report produced no credible evidence Wohlfiel fired the gun. King did not respond to an email seeking comment for this story.
Wohlfiel was fired, on Hutchins’ recommendation, on Jan. 4, 2017. He has filed a court action to force the Town Commission to reconsider his firing, Hutchins said. In the interview, Hutchins supported Lucibella’s right to a trial.
“Would I have liked to see this case disposed of without a lot of cost to taxpayers and use of resources? Yeah, I think so, that’s the administrator in me. But in reality that’s not how our system is set up,” he said.
“All the evidence will be weighed out in court before either a judge or a judge and a jury,” Hutchins said, “and that’s the best thing that could happen.”