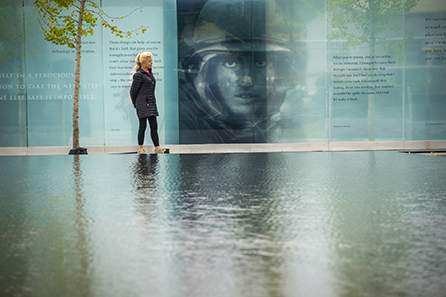 A new documentary film, Debt Of Honor: Disabled Veterans In American History, funded by Manalapan philanthropist Lois Pope and directed by Ric Burns, will premiere nationwide at 9 p.m. on Tuesday, Nov. 10, as part of PBS’ Stories of Service.
Focusing on how disabled veterans are regarded by their government and civilians, the human cost of war, and the sacrifices of military service from the time of the Revolutionary War forward, the film recounts disabled veterans’ stories combined with scholarly narrations, still images and archival footage.
Included in the film are interviews with disabled veterans U.S. Rep. Tammy Duckworth (Illinois); former U.S. Sen. and Veterans Affairs Administrator Max Cleland (Georgia); actor, motivational speaker and Iraq War Army veteran J.R. Martinez; and the former garrison commander of Fort Belvoir, Col. Gregory Gadson, who is a double amputee veteran of the war in Iraq.
“The goal of this film is to try to understand the realities and challenges that disabled veterans have faced throughout history and continue to face today,” said Burns. “There is a real necessity to bridge the gap between civilians and those who have served in the military.”
Pope, founder of the Disabled Veterans Life Memorial Foundation, spearheaded the creation of the American Veterans Disabled for Life Memorial.  The reflecting pool and star-shaped fountain with a ceremonial flame is sheltered by impressive stone walls along with bronze and glass panels etched with words and images that illustrate personal journeys of courage and sacrifice.
A 16-year endeavor on Pope’s part, the memorial was dedicated by President Barack Obama on Oct. 5, 2014, in Washington, D.C., and is the nation’s first permanent public tribute to the 4 million living disabled American veterans and all those who have died before them.
“Not everyone can visit Washington, D.C., and see the memorial dedicated to disabled vets,” Pope said. “That’s why I created and funded the film Debt of Honor, to teach our children and future generations about the human cost of war.
“It’s such a powerful film that the National Endowment for the Humanities has set aside funding (for it) to be shown in cities around the U.S.”
— Christine Davis