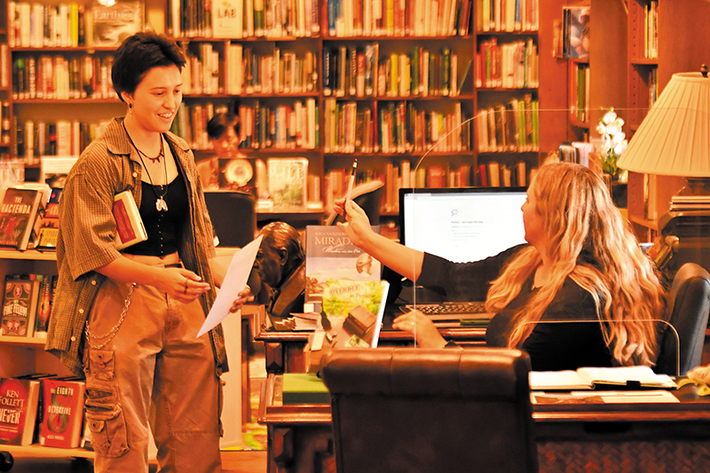 Behind the Books: Librarians open up about ever-expanding services to community

The Manalapan and Gulf Stream libraries would be the envy of their neighbors — if only those neighbors knew how much tax savings residents in the two towns reap because of their petite libraries.
Manalapan contributes $54,000 a year to its J. Turner Moore Memorial Library on Point Manalapan. If the library didn’t exist and town residents had to pay property taxes to the Palm Beach County Library District instead, their tax bills would be more than a million dollars higher this coming year.
“My sales pitch every year is it’s worth $54,000 to operate the library and have the events that we have and save the residents that much money,” Manalapan Town Manager Linda Stumpf said at the town’s first budget workshop in June.
“Most people don’t understand it,” Mayor Keith Waters added.
The Rita L. Taylor Gulf Stream Library doesn’t even have a line item in that town’s annual budget. But by having the 13-by-14-foot library, which takes up a single room in Town Hall, Gulf Stream property owners will avoid paying more than $800,000 in county library taxes this coming year.
The library’s hundreds of books have sat on its shelves for decades and don’t include any recent novels typically popular at libraries. The library, open during Town Hall’s normal operating hours, gets more use as a conference room for town officials than as a place where residents go to find a good read.
Taylor, the long-serving town clerk for whom the library was named last year, doesn’t remember the last time there was a visitor drawn to the library itself.
“I think maybe someone had taken out a book six or seven years ago,” Taylor said.
The only other municipality in a similar situation is the Village of Golf, which has a library in a room in its Village Hall and is not part of the county system. In Palm Beach, the town makes annual donations to the Society of the Four Arts Gioconda and Joseph King Library, which is treated as the town library.
The annual sum Palm Beach contributes to the King Library — $363,230 this year, for example — is much larger than what Manalapan gives its library, but so are the tax savings for town residents. If Palm Beach were part of the county system, its taxpayers would owe more than $14 million this coming year.
Ocean Ridge tried to get out of the county library district in 2009 by setting up its own community library at Town Hall, but the county rejected its request to leave. The county library director at the time said the town didn’t have a separate town allocation for the library and it didn’t provide sufficient services to meet Florida Public Library Standards.
The county’s library tax bill for Ocean Ridge property owners was about $361,000 back in 2009. It will grow to almost $800,000 this coming year.
South Palm Beach and Briny Breezes are also part of the county system. South Palm Beach taxpayers paid about $267,000 to the library district this year and Briny Breezes taxpayers about $38,000.

County library history
Who pays county library taxes and who doesn’t goes back to decisions made a half-century ago, according to a 1986 history of the county system included in the Florida Library History Project.
Briny Breezes and Ocean Ridge, which didn’t initially qualify to be part of the county system set up in 1967, were permitted to join in the early 1970s, the history says. Around the same time, Manalapan and Gulf Stream, which had been included in the new system, were allowed to leave.
In order for Manalapan to secede from the county library district and its taxes, the town had to have a library of its own, which its voters supported in a referendum, according to the book Overdue in Paradise: The Library History of Palm Beach County.
Getting out of the district isn’t quite as simple anymore. The County Attorney’s Office has determined that “to withdraw from the district a city must levy a tax against its residents for library services,” according to County Library Director Douglas Crane. The county would also likely require the municipality to have more elements of a full-service library than Manalapan or Gulf Stream currently has.
On the other hand, if an independent municipal library isn’t providing a higher level of service, it probably can’t be forced into the county system, Crane said. The state requires towns and cities to meet full-service standards only if they are applying for state aid.
“There is no mechanism to my knowledge, either at the county or state level, that requires a municipality to annually verify their commitment to library service if they are not applying for the State Aid Grant,” Crane said in an email to The Coastal Star. “There is also no mechanism to my knowledge to force municipalities that were never historically part of the Library District to join it.”
Residents of Boca Raton, Gulf Stream, Highland Beach, Manalapan, Palm Beach and Golf have to buy a nonresident card if they wish to take advantage of services from the county library or participating municipalities, Crane said. The county’s current rate is $55 for six months or $95 for a year, he said.
Boynton Beach, Delray Beach and Lantana are part of a cooperative with the county that allows their residents to use the county’s system for free. 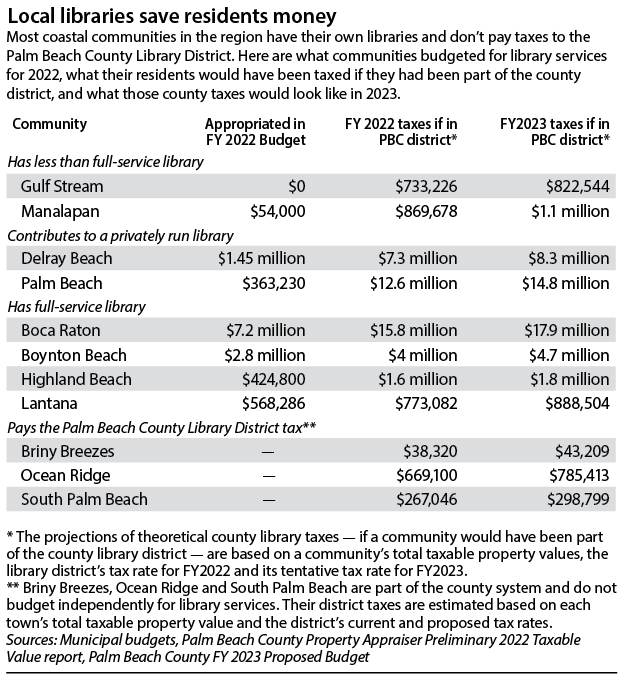 Financial benefits
Manalapan and Gulf Stream aren’t the only coastal communities that benefit financially from not being part of the county library taxing district, which includes unincorporated Palm Beach County and 24 municipalities.
Other communities, including those providing full-service libraries, end up paying less to have their libraries than if they belonged to the county system.
Taxpayers in Boca Raton, which budgeted $7.2 million for city libraries this year, including debt service, would have owed about $15.8 million if they had been in the county library system.
In Boynton Beach, which had $2.8 million in its budget for its library this year, taxpayers would have instead owed $4 million if they were in the county district.
Highland Beach’s $424,800 library budget was less than the $1.6 million its taxpayers would have owed if they were part of the county system.
Even Lantana, which would have owed only about $773,000 if it were part of the county system this year, had a lower library budget of $568,286.
Delray Beach supported the nonprofit Delray Beach Public Library Association to the tune of almost $1.5 million this year, but its taxpayers would have owed $7.3 million to the county if it had been in the county system. That figure would be closer to $8.3 million this coming year because of rising property values.
The difference is less about cities running their libraries more efficiently than it is about how wealthier communities in large taxing districts pay more proportionally than less wealthy communities, Crane said in another email.
“The fact that wealthy communities pay more into a taxing district does not correlate to the efficient cost to deliver a service,” Crane said. “It only demonstrates that a municipality would be a net contributor to the district. This is true of the County General Fund which includes all the municipalities listed.” A curved wall in Manalapan’s library is the only hint that the library hides the town’s 400,000-gallon water storage tank. BELOW RIGHT: The circular outline of the water tank is apparent in this aerial view of the library. Photos by Jerry Lower/The Coastal Star and from Google Maps 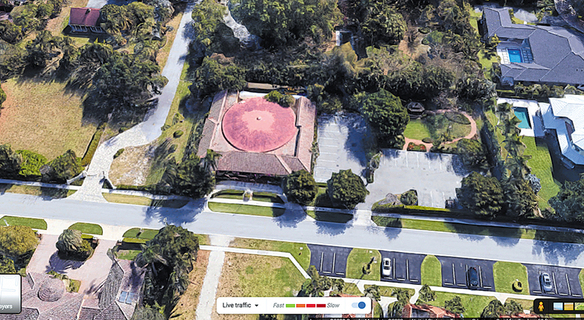 A community library
Manalapan officials are pleased with the success of their library, even if its collections are not heavily used. On July 13, there were only 58 books, DVDs, CDs and audio tapes listed as checked out by patrons.
The library functions like a community clubhouse, attracting patrons to some well-attended events there. Those include an open house at the beginning of the season when residents are returning to town, a farewell party at the end of the season before most leave, occasional speakers and piano concerts (the library has a Yamaha grand piano).
“The events are much higher quality than you’d ever expect from a library this size,” said Mary Ann Kunkle, a 36-year resident who was picking up a book and some DVDs on a recent Wednesday.
The Manalapan library is a “two-fer” for the town. Not only did the library allow the town to get out of the county’s library taxing district, its current home wraps around the town’s unsightly 400,000-gallon water storage tank, hiding it from view.
The only thing that hints of the tank is the interior oval wall of the library that bends around the tank and has a collection of about 40 paintings for sale on it.
“I think it’s a great place to meet people, or a nice place to go and relax,” said town resident Robert Cuyar, who has used the library and attended functions there for decades. “They have a good selection. They have many of the current books.”