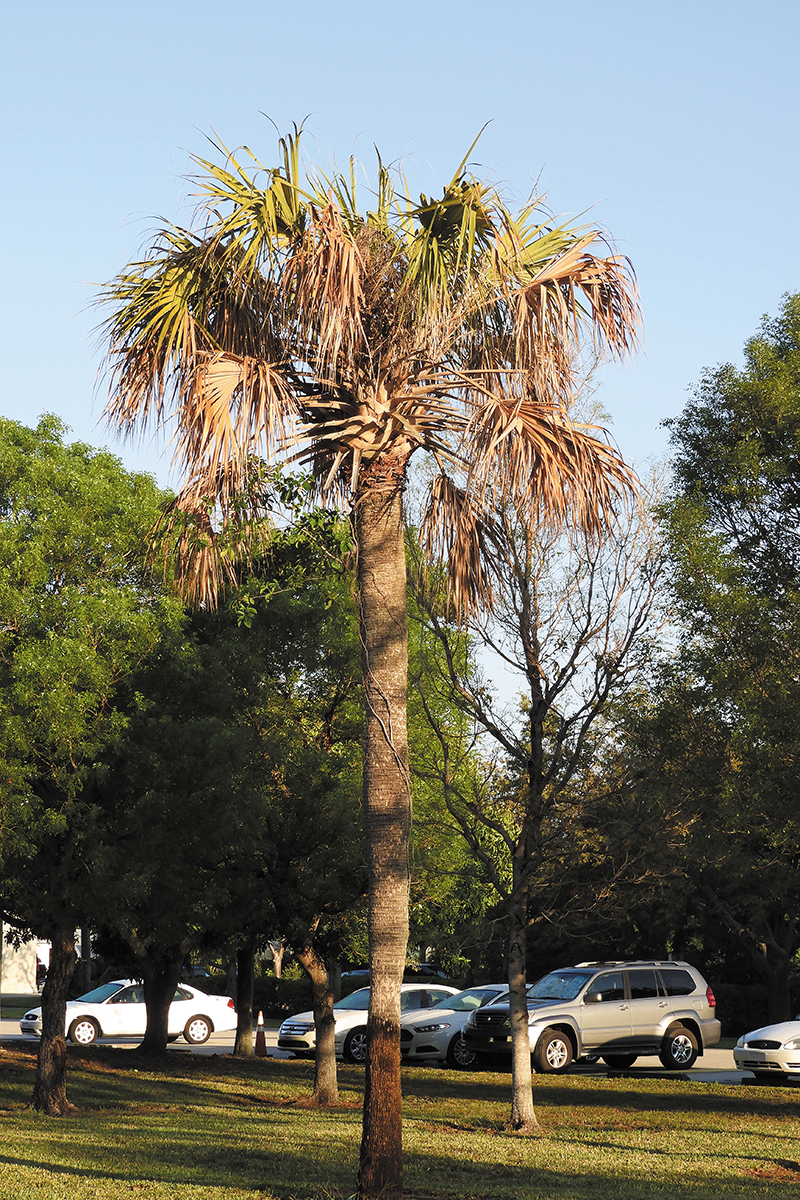 It’s the worse-case scenario for homeowners who have invested in palm trees costing $5,000 to $10,000 each. The trees’ fronds are turning a bronze-brown and new fronds are curling up and dying.
The arborist’s news is bad: The trees have a new disease that is terminal.
In 2006, a relatively new deadly bacterial disease called lethal bronzing hit the Tampa area and quickly spread east, killing palm trees ranging from stately Canary Island date palms to the indomitable sabal palmetto palm, the state tree. It has become prevalent in Palm Beach County just in the past couple of years.
Lethal bronzing, similar but genetically distinct from lethal yellowing, is now common on Florida’s east coast and is causing “significant palm losses in Palm Beach County,” according to University of Florida research.
Michael Zimmerman, owner of Zimmerman Tree Service, which has offered tree disease diagnosis in Palm Beach County for 39 years, says he has been doing preventive treatment for palms against lethal bronzing throughout the county, including on the barrier islands.
Once infected, the tree dies. Unlike lethal yellowing, there is no treatment for lethal bronzing, although the antibiotic oxytetracycline can be given to nearby trees for prevention against the disease, which is spread by planthopper insects.
Prevention requires inserting a port in the palm trunk where the antibiotic is injected every three or four months for at least two years. If homeowners have a big investment in one of the 16 species of trees susceptible to lethal bronzing, they will probably want to consider preventive treatment.
Symptoms of lethal bronzing include bronze-colored dying lower fronds; flower spikes that die prematurely; new palms that die and fold over; and premature fruit dropping, says Laurie Albrecht, horticulture extension agent with the University of Florida/Institute of Food and Agricultural Sciences.
Once a tree shows symptoms it’s too late for treatment.

Often misdiagnosed
Lethal bronzing is often misdiagnosed as lethal yellowing, which became prevalent in the southern third of Florida four decades ago, according to Zimmerman. The disease, also spread by planthoppers, killed more than 30 palm species but was particularly devastating to tall coconut palms.
But unlike trees infected by lethal bronzing, trees infected by lethal yellowing could be saved by injection of oxytetracycline every four months. Lethal yellowing is not as prevalent as it once was because of aggressive use of oxytetracycline and removal of diseased trees.
“Lethal yellowing is still here but it’s relatively rare,” Albrecht says.
Lethal bronzing, also called Texas Phoenix palm decline, was first seen in Texas, she says. DNA from the Florida disease was a perfect match for the disease found in Corpus Christi, Texas. The only way to diagnose the disease is by core sampling, which is sent for laboratory analysis, Albrecht says, because the disease is similar to other palm maladies such as potassium deficiency.
Lethal bronzing spread quickly throughout the Tampa area, which prompted an inoculation program for about 300 healthy trees at 24 sites around the city.

Spread only by insects, the disease cannot live outside a plant or insect, so it can’t be mechanically transmitted by pruning tools or infected roots touching new roots, according to University of Florida research.
Lethal bronzing, which affects a much smaller number of palm species than lethal yellowing, has killed palms including sabal, queen, Chinese fan and Carpentaria.
“It’s all over. We’ve seen it on the barrier islands. We’ve seen a lot of sabal palms go down, which never happened with lethal yellowing. The trees are infected by insects similar to the way mosquitoes transmit diseases,” says Zimmerman.
Tracey Stevens, Ocean Ridge’s acting town manager, said, “We have had a couple of complaints, and recently had to remove two dead coconut palms on Old Ocean Boulevard near Colonial Ridge that are in the town’s right of way.
“Public Works is currently working with our contractor to assess which trees may need to be treated, and which ones need to be removed if they are too far gone at this point.”
“Two trees with lethal bronzing were taken down,” said Bill Armstrong, head of public works for Ocean Ridge. “We’re keeping an eye on it. Not worried about it yet.”
Prevention is key for saving expensive healthy palms that are susceptible to lethal bronzing, according to University of Florida research.
“Currently, some developers in Palm Beach County are beginning to ask for susceptible palm species to be tested prior to installation,” Bill Schall, the UF/IFAS extension commercial horticulture agent, said in a blog.
“People are putting in expensive palms and you need to take care of them,” says Zimmerman. “Preventive care for lethal bronzing is now standard health care.”