Hear a recording of this story

How would you describe a map of Africa to a blind person?
How would you explain a chart of the fluctuating U.S. economy to someone who cannot see that chart?
How would you talk like a pirate?
The Gladys Davis Pavilion at Florida Atlantic University does not look like the sort of place where these weighty questions are pondered. To be honest, it used to be the university’s police and parking services building. As pavilions go, it’s small and nondescript.
But every Tuesday through Saturday, six hours a day, men and women, young and old, arrive here to tackle those questions. 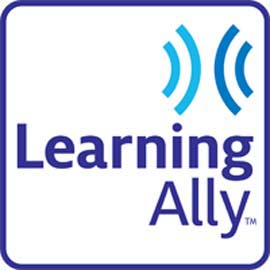 Since 1997, the Davis pavilion has been the Florida home of Learning Ally, a national, nonprofit organization that records books for people with visual impairments and learning disabilities.
FAU is paid $1 a year for letting Learning Ally use the building. The nearly 100 volunteers who serve two-hour shifts in seven recording booths get nothing.
“I don’t have a specialty,” says Lois Dwyer of coastal Boca Raton. “Last week I finished a middle school science book on weather, and my next chapter is a college-level U.S. history book that covers 1900-1910.”

A 32-year veteran of IBM, Dwyer came to Learning Ally three years ago when the company asked employees to mark its 100th birthday by volunteering somewhere for eight hours during the year. Through a friend, Dwyer found Learning Ally, and she’s been there every Tuesday ever since.
“I really enjoy it,” she says. “It gives me satisfaction in that I’m helping someone who wants to better themselves, and for whatever reason they learn aurally rather than visually.”

Dedicated volunteers have
audience of thousands
But let’s rewind the story a bit. After World War II, the G.I. Bill guaranteed a college education to all returning veterans — some of whom had been blinded in the war. They couldn’t read Braille. They didn’t have anyone to read for them.
Anne T. Macdonald, a member of the New York Public Library’s Women’s Auxiliary, heard their frustration. In 1948, she and her auxiliary colleagues turned the library’s attic into a makeshift recording studio and Recording for the Blind was born.
In 1995, Recording for the Blind became Recording for the Blind & Dyslexic, to reflect the growing number of users with learning disabilities.
Since 2011, it’s been Learning Ally. Today, more than 70 percent of its users are children and adults with learning rather than visual disabilities.
The recordings that began as 6-inch vinyl disks, then cassettes and compact discs are now downloadable audio files.
Nationally, about 5,000 volunteers contribute 6,000 new titles a year to a library that’s passing 80,000 books.
In Florida alone, those titles reach about 5,500 learners, including 4,000 students in public and charter schools, where free access is required by law. Another 1,500 household members pay $119 a year for the service.
“But for that, you can take 10,000 books if you want,” says Doug Sprei, the organization’s media director. “Our service is heavily focused. More than two-thirds of our books are core curriculum texts. Virtually any book a student needs from kindergarten through 12th grade, we have. Plus some popular reading for kids.”
In other words, the faithful volunteer readers who arrive at FAU each week are not passing the time with Gone Girl or Marley & Me. They’re reading aloud, very carefully, from the same books millions of students fall asleep over every night.
“We need conscientious dedication,” says production director Sonia Hedrick. “The books are assigned by our ability, so if I don’t have someone who can read Latvian, we’re not going to record a history of Latvia.”

Books get complete
production treatment
The Beatles had George Martin to produce their recordings. The FAU volunteers have Sonia Hedrick.

A former manager for volunteer programs at Meals On Wheels and the Boys & Girls Clubs of Broward County, Hedrick was feeding Goober, her half-blind shih tzu, one day in 2006. When Goober spilled food, Hedrick picked up his newspaper place mat to shake it clean and her eye fell on a classified ad: “Production director wanted. Must have experience managing volunteers.”
What do production and volunteers have to do with each other, she wondered.
Hedrick, who called out of curiosity more than professional interest, has been Learning Ally’s local production director for eight years.
“If our readers are sloppy, this is a problem,” she says. “Our students deserve the best. Mistakes escape us, but we try real hard.”
Her job is a lot more difficult than simply turning on a tape recorder.
“We say the book comes in ‘nekkid’ and we create a skeleton on which the meat of the audio is hung,” she explains.
An online history is created to show what’s been read, how much is left, the hours read, plus pages numbers and chapter headings.
These are texts for students, so unlike commercial audio books, the reader must be able to find a specific page number or chapter for future reference.
Not comfortable reading aloud? You might volunteer as a “proof listener.” Every completed book is checked for mistakes before it’s sent to the Learning Ally headquarters in Princeton, N.J., where it’s checked again before distribution. Spoken-word learning
not out of style
As Hedrick describes the procedure, she’s politely interrupted by a gentleman with an unmistakably English accent, asking how to pronounce “psilocybe mexicana.”
Brian Saxton, 77, of Delray Beach is a former BBC correspondent who now brings the network’s legendary attention to diction and detail to FAU each week.
“I heard about this three years ago, and since I’d been in broadcasting I thought maybe I could do something for them,” Saxton recalls.
“Right now I’m recording a book about drugs, but I read anything they ask. I did one on the American Civil War. I’ve read some children’s books.”
Doesn’t sitting in a tiny booth, reading textbooks week after week get boring?
“Not at all,” Saxton insists. “I’m very fond of the spoken word. It’s all iPhones these days. Nobody speaks to each other anymore. They’re all wandering around muttering to themselves. I think listening to somebody tell a story, whether fact or fiction, is more interesting. It’s more human.”
Which is not to say that every human has the patience for the job.
“The secret is to be attentive and don’t hesitate to redo it a dozen times if you make a mistake,” says Ken Solomon, 67, who has homes in Washington, D.C., and Delray Beach and volunteers for Learning Ally in both cities. “I did a couple of books for teens. They were pirate stories, so I got to have fun with the voices of the different characters.”
Pirates are not his forté, though. On this day, he’s recording Last Dance: Encountering Death and Dying.”
Death and dying aren’t his forté, either.
“Actually, I’m a retired accountant, so they give me a lot of accounting books,” he says with a smile. “When you do accounting books, you don’t worry about being boring.”