Increase mainly due to thefts from unlocked cars 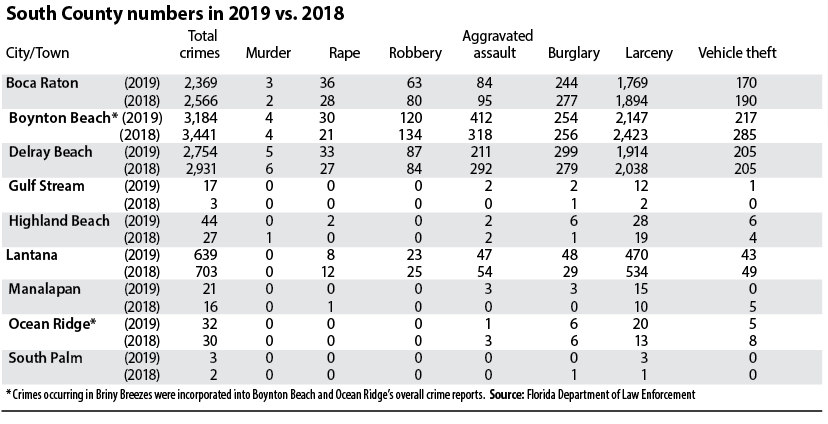 Numbers released by the Florida Department of Law Enforcement for 2019 show that South Palm Beach, Manalapan and Ocean Ridge each had small increases in reported crimes, while Gulf Stream and Highland Beach saw larger increases.

Larcenies, which can be anything from missing items to thefts from unlocked cars, were up significantly in Gulf Stream and in Highland Beach.

Gulf Stream recorded 12 larcenies in 2019 compared to two the year before, while Highland Beach had 28 larcenies compared to 19 the prior year.

Seven of the dozen Gulf Stream larcenies were thefts from unlocked cars and one was theft from an unlocked landscape trailer. The town reported one auto theft, which was the result of keys being left in an unlocked car.

“The simple message we’ve always had is lock your car doors,” Hartmann said.

That message has also been extended to lock all the doors in your home.

Highland Beach saw burglaries jump just from one in 2018 to six last year, with four of those occurring a few minutes apart. They were attributed to three females who entered the homes through unlocked back doors. The out-of-town suspects, two juveniles and an adult, were arrested and charged in connection with the break-ins.

Locking doors, Hartmann says, not only helps reduce the loss of valuables but can also serve as a deterrent for future crimes. If thieves find that residents are locking doors, they are less likely to return to that community, he said.

Crime in South County’s larger cities continued to fall for the second year in a row. Boca Raton recorded a 7.7% decline, Boynton Beach a 7.5% drop and Delray Beach a 6% reduction.

Any crime in Briny Breezes prior to Oct. 1 was included in the Boynton Beach numbers while those after Oct. 1 were reported by Ocean Ridge.

Countywide, major crimes declined about 8% while crime statewide dropped 6.3%, according to the FDLE’s Uniform Crime Report.