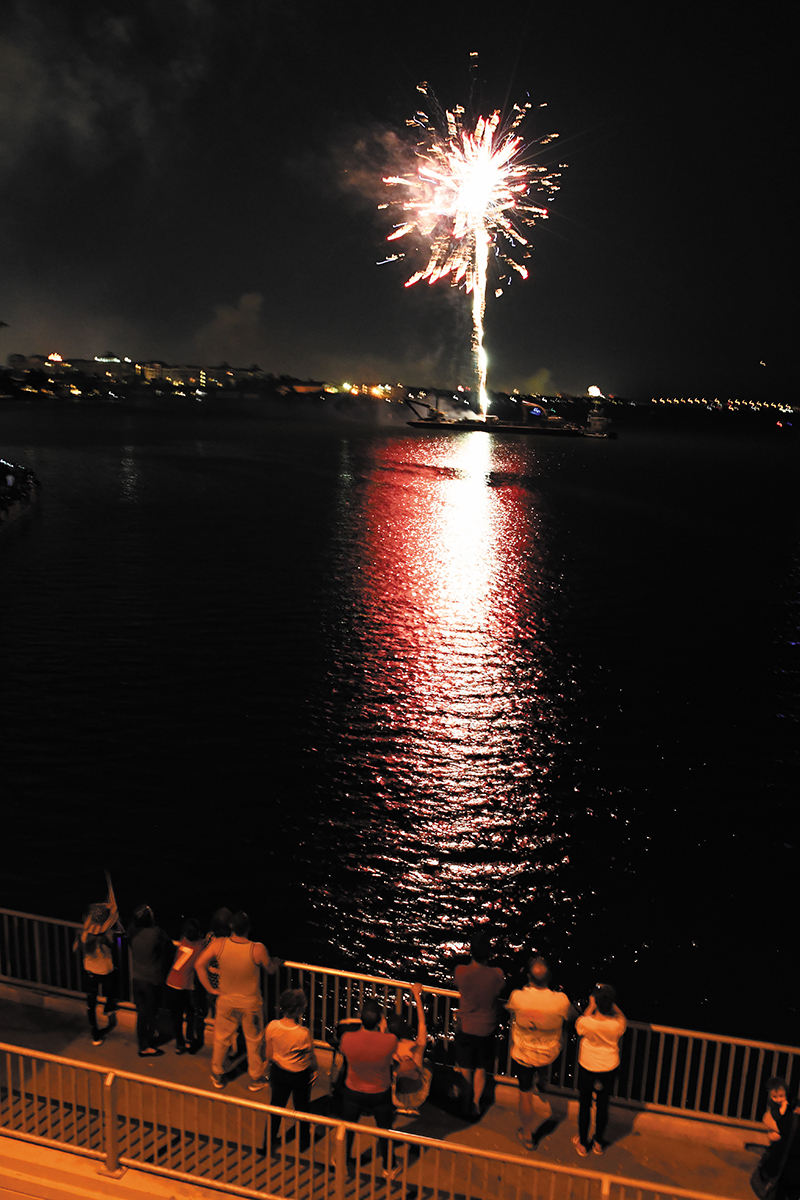 Crowds that gather on the Ocean Avenue Bridge and its fishing pier helped leaders decide to postpone this year’s fireworks in Lantana. 2019 photo by Jerry Lower/The Coastal Star

Lantana reversed course during the June 22 Town Council meeting, postponing its Fourth of July fireworks show. Until then, the town had planned to have the pyrotechnics display from a barge in the Intracoastal Waterway next to Bicentennial Park but without the traditional celebration in the park.
With the coronavirus pandemic lurking, one by one towns and cities up and down the coastline have been putting the kibosh on fireworks.
Boca Raton, Delray Beach, Deerfield Beach, Boynton Beach, Lake Worth Beach and North Palm Beach canceled or postponed fireworks and other Independence Day gatherings for fear of community spread of COVID-19. Like cities nationwide, they have been advised by the Centers for Disease Control and Prevention not to hold events with large crowds.
Since March, council members in Lantana said they wanted the $30,000 Zambelli fireworks show to go on, even if the party in the park wouldn’t be part of it. Residents were being encouraged to watch from their homes. All town parks in the vicinity — including Sportsman’s Park across the street from Bicentennial; Lyman Kayak Park just around the corner; and the beach, a short hike over the bridge — would be closed, blocked off with police officers standing guard.
Then on June 29, Palm Beach County Mayor Dave Kerner announced that all beaches — including Lantana’s — would be closed for the July 4 weekend, as well.
Before making the decision to postpone fireworks, Lantana officials were asking people not to cram together to watch the show from the bridge — or anywhere.
But Police Chief Sean Scheller said keeping people off the bridge — historically a favorite spot for watching the fireworks — would be a problem. He said he was concerned about crowd control.
He wasn’t the only one worried about unruly crowds. Dave Arm, president of the Lantana Chamber of Commerce, begged the Town Council to cancel the fireworks. He said he feared mayhem on East Ocean Avenue, the town’s downtown restaurant and shopping district.
“Considering what’s going on in the country, where people are using different circumstances as an excuse to make trouble, I don’t want to see windows broken from my member businesses on Ocean Avenue,” Arm said. “I don’t want to see people hurt. And I don’t want to see Lantana in the national news because we were stupid enough to have fireworks.”
Arm said it would be “insane and irresponsible” to have fireworks this year.
Council member Malcolm Balfour, who made the motion to postpone fireworks until a later date — perhaps New Year’s Eve or next April for the town’s centennial celebration — said he thought fireworks should not be held, especially with the number of COVID-19 cases steadily increasing.
Vice Mayor Lynn Moorhouse said he couldn’t second the motion for postponement — the thought of it made him sad, he said — but inevitably he voted in favor of delaying fireworks, as did all council members.

Fireworks a go in WPB

One city you can find fireworks is West Palm Beach. The Flagler event at the waterfront will not happen this year. Instead, fireworks will be launched from two different and undisclosed north and south locations so as many people as possible can see them.
Residents are encouraged to have a “POP” — a party on the porch. The city created a series of videos to help patriots party at home. Content includes how-to videos for recipes, decorations and games.
While many will be able to see the fireworks from their homes, anyone can watch by tuning into WPBF 25. Through a special partnership, the Hearst Television-owned ABC affiliate will broadcast the fireworks live to everyone in the station’s viewing area. Hubbard Radio’s seven West Palm Beach stations will broadcast fireworks music in concert with the event.
West Palm Beach Mayor Keith James said that, while Fourth of July plans might look a little different, they are no less significant for the city. “In fact, I’d say they are more significant this year than in years past,” James said. “We are celebrating the culmination of 125 years strong and pushing through this pandemic together.”
Residents and others from the area are encouraged to partake in a full afternoon of at-home entertainment, with the 15-minute show as the grand finale. Before the fireworks show begins, residents are encouraged to support local businesses by ordering takeout through West Palm Beach Eats, a restaurant delivery service, and stage their POPs. The DIY Event Guide (www.wpb.org/government/community-events/diy-event-guide) content will help people host their own events, using common and inexpensive household items. The videos were released on June 14. People are encouraged to post pictures and videos of their POPs to social media, using #WPBTogether, to join the virtual DIY Fourth of July celebration.

Delray Beach: Although the city canceled its fireworks display on the beach and Atlantic Avenue festivities leading up to the main event, some family-friendly festivities remain. They include: adorning houses and yards with red, white and blue decorations to compete for the Most Patriotic House honor; submitting favorite patriotic family or pet photos, and family recipes for the Fourth of July Digital Scrapbook; and joining the first virtual Independence Day Parade on July 4. For more ideas, visit www.delraybeachfl.gov/our-city/things-to-do/4th-of-july.
Boca Raton: The Recreation Services Department will present “Red, White & Blue in Boca,” a weeklong virtual celebration ending on July 4, on the Boca Raton Recreation social media pages and the city’s YouTube channel.
“In lieu of our annual Fabulous Fourth of July Celebration, we will be celebrating virtually as a community all week long,” said Monika Amar, community events coordinator. “Families are welcome to join in on any of the activities to create their own fabulous and festive Fourth of July holiday from home.”
Throughout the week, several patriotic-themed videos will be posted, including how-tos, festive craft and game ideas to do at home, backyard grilling tips, recipe and drink tutorials and much more. A few of the features include: the Children’s Science Explorium with a fireworks experiment; Mizner Park’s Cielito Artisan Pops with a patriotic popsicle demo; Tomasso’s with a patriotic pizza how-to; and blogger Heather McMechan from Local Mom Scoop with a recipe for making a Star Spangled Watermelon Salad with your kids.
For details, follow Boca Raton Recreation on Facebook, Instagram and Twitter.
Boynton Beach: The city postponed its fireworks celebration, which was supposed to include city centennial-related events during the day. The fireworks will be rescheduled when Zambelli, the fireworks supplier, has time to suggest options to the City Commission. Stay tuned.
Lake Worth Beach: The city postponed its Fourth of July fireworks and celebration until Labor Day.