Harry Patten says this sailboat has been anchored at the north end of Lake Boca since 2017. Willie Howard/The Coastal Star

Living in a waterfront home is a privilege.
But living with a water view can lead to unwanted neighbors when boaters pull up and drop anchor.
Some of the boats stay anchored in the same place for years. They fall into disrepair when owners leave town and forget about them, creating eyesores and hazards to navigation and the environment.
Harry Patten, who lives in a waterfront home at the north end of Lake Boca, has peppered Boca Raton city officials with emails about sailboats anchored near his home.
Last fall, Patten contacted Boca Raton police about a sailboat in front of his house he said was occupied by a family for more than a month.
“I smell their sewage when the wind blows my way,” he wrote in a Nov. 26 email to Boca Raton Police Chief Daniel Alexander.
Boats anchored near waterfront homes are in state waters and are not subject to the rules of municipalities. Anchoring a boat in state waters is legal as long as the boat has a current registration and proper lighting (anchor lights) and is kept in good condition.
That changes when boats are neglected and become at risk or derelict. State law defines “at risk” as boats that are taking on water without an effective means of dewatering, or that have broken loose — or are in danger of breaking loose — from their anchors.
One of the Lake Boca sailboats near Patten’s house has since moved, but one that Patten says has been there since 2017 is in legal limbo.
In a March email to Patten, Boca Raton Assistant City Attorney Christopher Fernandez said the city’s Police Services Department contacted the boat’s owner about its deteriorating condition.
Since then, Fernandez said, the city has lost contact with the boat’s owner and thinks he might have left the country.
City officials were working to determine whether the Lake Boca sailboat met the legal definition of abandoned or derelict, giving them the right to remove it.
Cases of at-risk, derelict and sunken boats are common throughout Palm Beach County.
A trimaran sailboat anchored north of Boynton Inlet broke apart during Hurricane Irma in 2017. Pieces of the boat became wedged under floating docks at Gateway Marina, causing $90,000 in damage.
Gregory Reynolds, director of LagoonKeepers, a 15-year-old nonprofit dedicated to keeping Palm Beach County’s inshore waters clean and free of navigation hazards, has removed dozens of abandoned and sunken boats from the county’s waterways.
The walls of his Riviera Beach office are covered with file folders, each holding information on a boat in Palm Beach County that needs to be removed from the water.
Founded in 2003, LagoonKeepers uses a combination of taxpayer-funded grants and private donations to remove about 24 sunken or derelict boats annually.
Remnants of many of the old boats are hauled to a storage yard next to Reynolds’ office.
After valuable parts are removed, the hulls are crushed and hauled to the landfill. 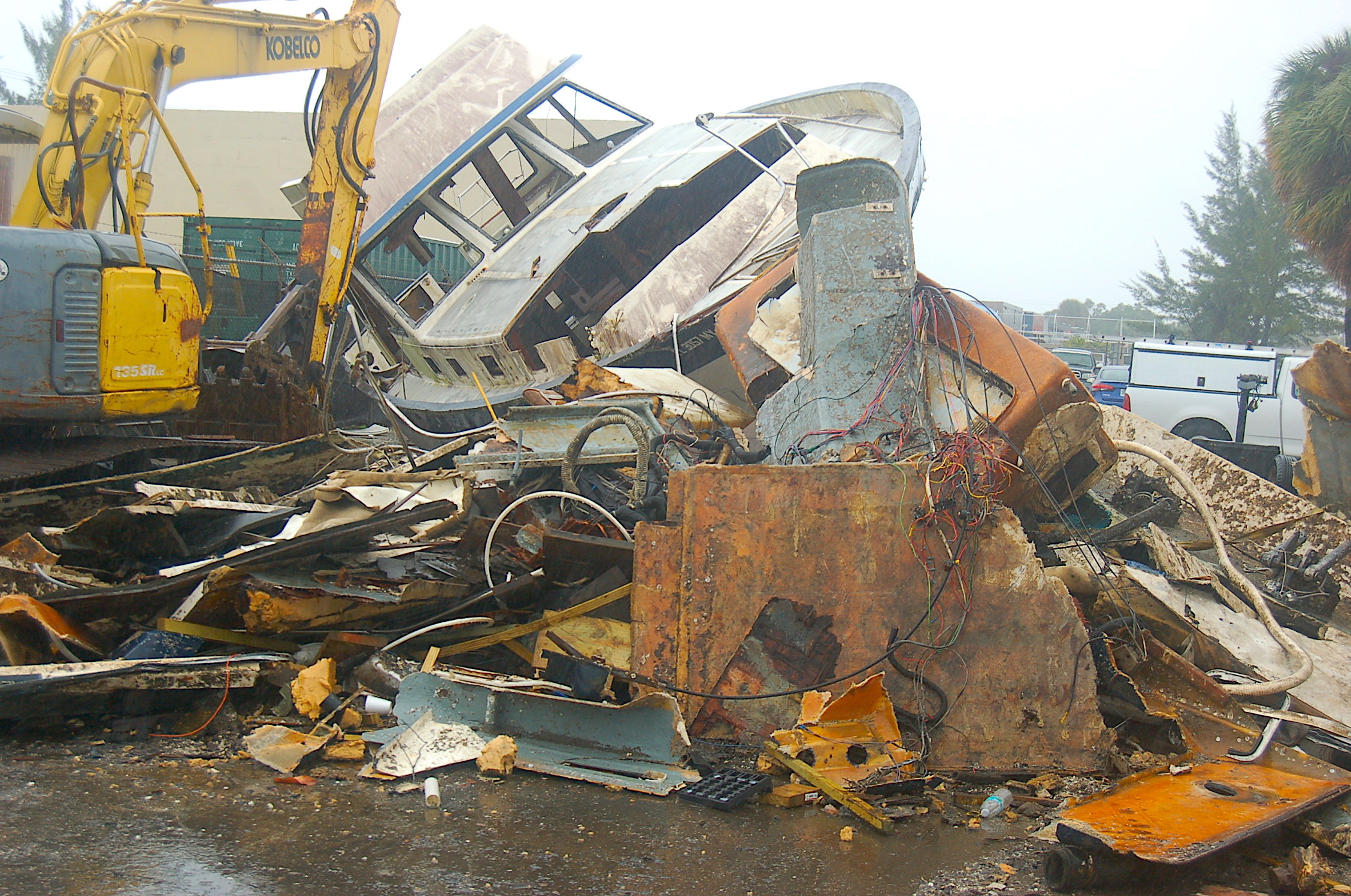 Scraps of sunken boats that have been hauled out of the water. After valuable parts are removed, the hulls are crushed and taken to the county landfill. Willie Howard/The Coastal Star

In mid-March, Reynolds was preparing to haul out a 39-foot sailboat that sank near Burt Reynolds Park in Jupiter, and was monitoring a 28-foot sailboat named Invictus that has been anchored at the north end of the Snook Islands Natural Area since December.
During the time it takes for a boat owner to be notified that a boat is derelict — and time allowed for the owner to request an administrative hearing — unkempt boats can sink, spilling fuel and trash into the water.
“Most of the environmental damage is done within the first two days of the boat going down,” Reynolds said. “I don’t think it should be legal for someone to anchor a boat and leave the state.”
Legislators are attempting to address the issue of anchored and derelict boats during the current legislative session.
House Bill 1221 directs the Florida Fish & Wildlife Conservation Commission to study the impacts on communities of boats stored long-term.
The bill also provides grant money for derelict boat removal and prohibits people from living on derelict boats.
Senate Bill 1666 would limit to 60 days the time owners or operators of boats could anchor outside of public mooring fields.
There are no designated mooring fields in Palm Beach County.