Talking points from the presidential contest are filtering down into this year’s rematch between state Rep. Mike Caruso and challenger Jim Bonfiglio.
The barrier island residents’ statehouse race in 2018 was decided by a scant 32 votes. Republican-leaning District 89 stretches along the coast from Boca Raton north to Singer Island. 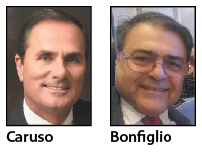 Caruso, a first-term Republican, warned South County voters in September that Delray Beach was “defunding the police” by cutting $421,121 from the department’s budget.
“Once crime takes hold in Delray Beach, it will spread to all corners of South Palm Beach County,” Caruso said.
Democrat Bonfiglio fired back, calling Caruso’s email “reckless and irresponsible.”
“Representative Caruso, who brags about his Forensic CPA credentials and tenure as a former Delray Beach Police Advisory Committee member, failed to talk to (Police Chief Javaro) Sims and instead fear-mongered for political gain,” Bonfiglio said.
Delray Beach Mayor Shelly Petrolia, a Democrat, also weighed in, saying the $421,121 was “for overtime no longer needed due to canceled events.”
“Representative Caruso’s misleading statements and unfounded attacks on our City Commission and police chief are greatly disappointing,” Petrolia said.
On his campaign website (electmikecaruso.com), Caruso also supports cutting taxes, extending sales tax holidays and helping small businesses cope with the coronavirus pandemic.
Bonfiglio, meanwhile (on jimbonfigliofordistrict89.com), lists Medicare for all as an “ultimate goal” and promises to work for a state law requiring a permit to purchase a gun and banning the sale of military-style weapons. He also wants to raise Florida’s minimum wage from $8.65 to $15.
Caruso, 62, says he wants to safely reopen the state’s economy and get people back to work. “It is incumbent on all of us to do our part by following CDC and state guidelines as well as getting tested if you believe you are sick,” he said.
Caruso, an accountant in Delray Beach, also has a local legislative office in Boca Raton.
As of Oct. 16, the latest numbers available, Caruso reported collecting $397,461 in campaign contributions and spending $319,591.
Bonfiglio, 67, is a lawyer and sat on the Ocean Ridge Town Commission from 2014 to 2018, the final eight months as mayor. He had $348,914 in campaign contributions through Oct. 16, including $77,500 in self-loans and $6,000 in in-kind donations. He had $285,105 in expenses.
Early voting continues from 7 a.m. to 7 p.m. through Nov. 1 in Boca Raton at Sugar Sand Park, Spanish River Library and Florida Atlantic University; in Delray Beach at the Delray Beach Community Center; in Boynton Beach at the Ezell Hester Community Center; and other locations across the county.
Election Day is Nov. 3.