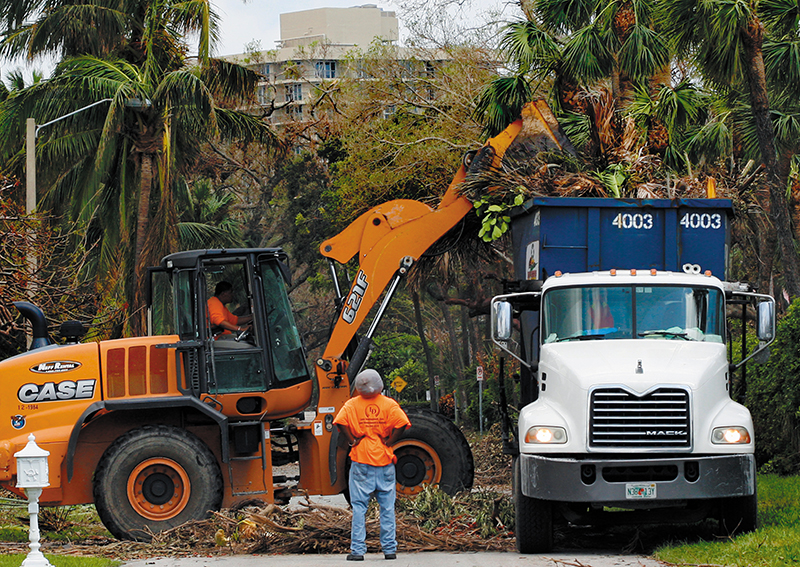 Debris removal was a huge headache along the coast. 2017 Coastal Star file photo

Nearly a year after Hurricane Irma, South County coastal cities are honing lessons into actions to prepare their residents, businesses and workers for the next big storm.
Each of the 10 coastal cities and towns received the same list of questions from The Coastal Star, divided into five main categories: communications, curfews, power, shelters and debris removal.
Here are the highlights of their responses:
For communications, how did your city/town inform residents of the approaching storm and areas to be evacuated? The three big cities used their websites and social media to alert residents. Boca Raton, Boynton Beach and Delray Beach also have AM radio stations to use.
Smaller locales don’t use social media. In Gulf Stream, its officers alerted residents by going door-to-door, said Town Manager Greg Dunham. Manalapan sent emails about the approaching storm to its residents, said Linda Stumpf, town manager.
Lantana also used a PA system and personal contacts to alert its barrier island residents about evacuating, said Robert Hagerty, Lantana police commander.
Highland Beach found its CodeRED emergency platform most effective in alerting residents about Irma, said Police Chief Craig Hartmann. “For this hurricane season, we will be activating CodeRED notifications sooner and more frequently,” he said.
South Palm Beach, which is primarily condo buildings, sent faxes and emails to condo managers about the mandatory evacuation, said Mo Thornton, town manager. “Patrol officers drove throughout town with lights activated, encouraging residents to evacuate,” she said.
Ocean Ridge used its Twitter and NextDoor accounts, among other methods, to alert residents about the mandatory evacuation, Town Manager Jamie Titcomb said.
Briny Breezes Council President Sue Thaler said the town’s main goal after Irma wasn’t changing procedures but trying to improve communication with the corporation. The idea is to precisely define the roles of the government and corporation in dealing with storms.
How were post-storm communications handled? Most municipal representatives said this issue needs work.
Along with Highland Beach, Delray Beach is pushing residents to sign up for CodeRED now so the city has a way to communicate with its residents post-storm.
South Palm Beach will use Blackboard Connection, similar to CodeRED, to communicate with residents this year, Thornton said.
Out-of-state residents will be issued ID cards that can be used to enter the town at the checkpoints post-storm, Thornton said. As part-time residents, their government-issued IDs don’t have South Palm Beach addresses.
Most municipalities followed the countywide curfew that went into effect at 3 p.m. Sept. 9. Based on advice from its Police Department, Delray Beach asked residents to clear the streets even earlier that day — by 2 a.m. Boca Raton delayed its curfew by one day.
In Boca Raton, “curfews are a challenge to coordinate for us because we’re on the border of Broward County and have many residents that live in one county and work in another or vice versa,” Gibson said. “There needs to be better coordination on curfews.”
Florida Power & Light, the main electricity provider, said 95 percent of its customers had power restored within seven days following Irma, compared with 15 days after Hurricane Wilma in 2005.
Boca Raton, Delray Beach and Boynton Beach were able to open their libraries just after the storm to give their powerless residents a place to charge their electronics.
Shelters in the public schools were adequate; residents have to bring their own food and bedding. New for 2018, the county will hire two mental health counselors per shelter to help with anxiety issues.
The county has a special needs and pet shelters, which require advance registration.
Debris removal proved to be the bane for most municipalities.
Even though the cities and towns had contracts with debris haulers, it became a free-for-all with most of Florida’s 67 counties impacted by Irma.
Gov. Rick Scott allowed the Florida Department of Transportation to hire haulers without going through a bidding process, Neal de Jesus, interim city manager during Irma, told Delray Beach city commissioners in September. Scott wanted to quicken the pace of cleanup in the Keys and Miami-Dade County, which were hardest hit.
As a result, contractors left Palm Beach County cities where they were making $7 per cubic yard to earn as much as $18 per cubic yard hauling debris farther south.
Delray Beach commissioners and Boca Raton council members agreed to pay AshBritt haulers more per cubic yard, until Florida Attorney General Pam Bondi started to investigate AshBritt and other haulers for price gouging. AshBritt no longer sought the price increases.
Then, the problem became not enough truck drivers.
Boca Raton purchased a few more trucks this year to help with post-storm cleanup, Gibson said.
Many municipal representatives think the governor needs to set a pre-storm, standard rate for debris removal.