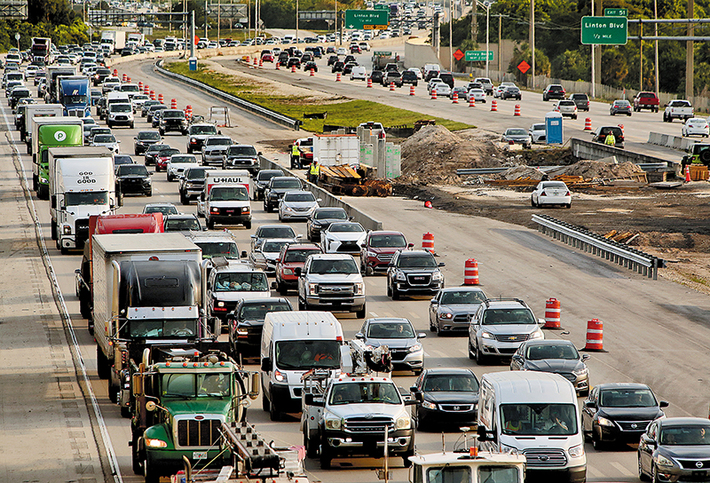 Separate from interchange work, construction slows southbound morning traffic between Linton Boulevard and the Congress Avenue exit. The work in each direction will allow for toll express lanes to connect with those in Broward County. Tim Stepien/The Coastal Star

When traffic engineers peered into their crystal ball in 2015 to study Interstate 95 interchanges from Delray Beach to Palm Beach Gardens, they saw a major need.
Not just a need to add lanes to handle ever-growing traffic on the major north-south highway.
They saw 17 interchanges of 17 studied between Linton Boulevard and Northlake Boulevard where congestion is expected to get so bad that traffic would spill over onto the main highway and cross traffic would be forced to wait longer and longer to let vehicles enter and exit the highway.
The $1.7 million study by consulting engineers Kimley-Horn put into motion a plan that could reshape the interstate over the next 10 years, with $450 million in projects teed up, even as the state rebuilds the Glades Road interchange and adds express lanes from Boca Raton to Linton Boulevard.
Five of the 17 interchanges studied are in South County, and the work on one of those five is already done. Atlantic Avenue opened in April after a two-year, $5.2 million project to split traffic on westbound Atlantic so that the two far right lanes are separated and drivers can choose northbound or southbound entries to 95.
No work is expected on the remaining four South County interchanges until October 2024. After that, plans call for construction to start on a South County interchange every year through 2027.
The Boynton Beach Boulevard interchange, with a $61 million total project cost, is scheduled first. Next are the $28 million Linton Boulevard job, scheduled to start in October 2025, the $40 million Woolbright Road job in 2026 and the $97 million Gateway Boulevard reconstruction to start in 2027.
But those dates are far from fixed.
Most of the interchange projects in the five-year plan scheduled to be approved in June by local officials on the Transportation Planning Agency, including Linton and Woolbright, are stuck in a logjam of projects likely to be spread out over years.
Picture a field of horses jockeying for position at the start of a race. The issue is too many projects, not enough money.
The plans are refined every year, based on predicted revenues from an ever-changing catalog of federal programs, changes in design, or decisions to make a project cheaper or more expensive, said Nick Uhren, executive director of the Palm Beach Transportation Planning Agency, which acts as a liaison between state transportation planners and local elected officials.
Uhren said that Florida Department of Transportation officials “match up funding dollars with each program and hope that the Sudoku puzzle fills everything in.”
“If cost goes up, they have to delay. ... Sometimes projects get accelerated. … We’ve got four or five years to figure out if there are better ways.”

Toll lanes south of Linton
The interchange improvements will compete with other I-95 projects, including adding a new lane on the interstate in each direction south of Linton Boulevard. That would allow for paid express lanes on the freeway, a step already taken in Miami-Dade and Broward counties.
Work is well underway on express lanes from Southwest 10th Street in Deerfield Beach to Linton. One example is the rebuilding of the Clint Moore Road bridge over I-95, which is closed through summer 2022.
The express-lane project, with a construction price tag of $250 million, is split into two parts, with a rebuild of the Glades Road interchange in Boca to be completed in 2023. The state plans a diverging diamond interchange, which is considered safer because it reduces the number of left turns.
The state has not set aside any money in its five-year plan to continue express lanes north of Linton to Indiantown Road, although a future needs plan lists the expansion as a $2.6 billion task.
Instead, highway spending north of Linton in Palm Beach County during the 2020s is concentrated on upgrading the interchanges, the key choke points where traffic stops on major east-west roads to let cars get on and off the highway.
If nothing were done, the 2015 master plan found, all 17 interchanges would fail to flow smoothly by 2040. The only interchange between Linton and Northlake that the consultants didn’t examine is the direct flyover to Palm Beach International Airport between Belvedere Road and Southern Boulevard.
South County projects have fared well in recent years, with completion of the Atlantic Avenue interchange in Delray Beach and a new interchange at Spanish River Boulevard in Boca Raton and work underway at Glades Road.
Smaller jobs, such as adding or extending turn lanes, have been completed at Woolbright, Lantana, Hypoluxo, Blue Heron and 10th Avenue North.

Other projects lined up
FDOT records show construction would begin on five major interchange projects over the next four years, with two starting in October 2022, two the next year and one the following year.
Those projects — at 6th Avenue South and Belvedere Road in 2022, PGA Boulevard and Indiantown Road in 2023 and Boynton Beach Boulevard in 2024 — would cost $103 million combined.
PGA and Indiantown are not among the 17 interchanges studied by Kimley-Horn, since they are north of Northlake Boulevard.
Seven projects worth an estimated $277 million are bunched up with tentative construction dates spanning two years at the end of the five-year planning period.
As Uhren explained, meeting that schedule is unlikely. His agency published a list in March that assigned construction start dates to the projects, but even that report refers to the dates as “a snapshot” that “can change frequently.”
Three of the seven projects are in South County: Linton and Gateway boulevards and Woolbright Road. Gateway is in line for the most work, with plans to widen it to four lanes in each direction over the highway and to add turn lanes onto the highway entrance and exit ramps.
Linton would be widened, with new lanes added to the highway as well. At Woolbright, a $12 million “interim” job expanded the lanes for vehicles waiting to enter the highway, both eastbound and westbound. That project ended in 2019. But a bigger $40 million job calls for more turn lanes and extended highway entrance ramp lanes. Final conceptual designs were due in April, although construction isn’t contemplated until 2026. A separate $1.46 million project to add a right-turn lane on eastbound Woolbright at Seacrest Boulevard is scheduled for 2021-22.
The others are at 45th Street, Hypoluxo Road, Northlake Boulevard and Palm Beach Lakes Boulevard. Gateway already was pushed back a year from the fifth year of the five-year plan to June 2027, according to the TPA “snapshot” schedule.
As federal gas tax revenues drop because of a decline in travel during the coronavirus pandemic and a rise in fuel-efficient vehicles, the most likely scenario is that no more than two or three projects would move forward in a year.
Barring a major push for more road money from Congress, the rest would get pushed further down the road.
The 21 local elected officials who sit on the Transportation Planning Agency board can proclaim priorities, but final decisions are made by FDOT officials, weighing projects and special highway revenues both statewide and in the department’s District 4, which spans Broward, Palm Beach, Martin, St. Lucie and Indian River counties.
So which job goes first depends on revenues, project cost and readiness as much as on needs determined by local officials.
Three of the seven — Northlake, Linton and 45th — are now scheduled for fiscal 2026, which ends in July 2027. The others are slated for fiscal 2027.
If those all go forward, 10th Avenue North would be next, scheduled to start work in October 2027, a year before Lantana Road.
Also on the books for October 2028 is a new $108 million interchange at Central Boulevard in Palm Beach Gardens.
While construction on Southern Boulevard would not start in the 2020s, FDOT plans to spend $17 million on designs and land buys to prepare.
Blue Heron and Okeechobee boulevards are not even tentatively set for construction in the 2020s but FDOT officials point out that some money has been spent on both already.
Blue Heron got a $1.2 million facelift in 2017, with the addition of left-turn lanes at the off ramps and an extended left-turn lane at Garden Road.
Okeechobee got a $1 million injection for an eastbound right-turn lane.