Early estimates predict Hurricane Ian will become Florida’s costliest storm ever, but even before it made landfall eye-popping jumps in insurance costs were already arriving in mailboxes and phone apps all over southeastern Palm Beach County.
“After Ian, who knows?” Delray Beach insurance agent Dean Laible said about how high premiums could climb.
A $4,900 annual premium turned into $16,000 overnight for Jerilyn Walter, owner-broker of Posh Properties with offices in Ocean Ridge, Delray Beach and Lantana. She had become accustomed to helping clients stay apprised of insurance issues, only to face a startling increase in August on her own Delray Beach home with a new roof west of Interstate 95.
“I knew it was going to go up a little bit,” she said, in part because the home’s market value had increased significantly. “But triple to over $16K? With no claims? It was shocking.”
She shopped for a better insurance deal but could not find one. She said she has put the house up for sale a year after buying it.
Cash buyers and the super-wealthy may be in a better position to weather the turbulence, but just about everyone else is having to factor in a new reality.

A recent deal to buy a coastal Delray Beach home to be insured for more than $1 million fell through when the insurance premium came in at $22,000, said John G. Backer, one of the owners of the Gracey-Backer Inc. insurance agency in Delray Beach. The buyer purchased a home farther west where insurance was cheaper.
“The Florida insurance marketplace is the worst in the country, and this might be the worst it’s ever been,” Backer said. “And with Ian, it might only get worse.”
A Briny Breezes resident told one agent she would drop hurricane coverage because it simply costs too much.
Similar stories are coming in at Absolute Insurance of Palm Beach County Inc., where Laible is president.
“A lot of people without a mortgage are self-insuring for a hurricane,” he said, a practice where people set aside their own money to pay for possible losses rather than purchase an insurance policy. “Prior to Ian, people were concerned rates were going to jump 20 to 30 percent again. After Ian, who knows?”
Similar tension roils the market for insuring boats.
Before Ian hit Florida in late September, it was not uncommon to find multiple national name-brand insurers willing to cover craft up to 30 feet, Laible said.
Bigger vessels were likely to have to rely on a “surplus lines” specialty insurer, such as Lloyd’s of London, he said.
Now, all are waiting to see how the market reacts. Already, in some cases a craft that cost $5,000 a year to insure in the recent past is drawing quotes around $15,000, he said.
If people self-insure for wind insurance on their homes, they still could choose to cover other perils such as fire. An important question especially after Ian is whether to take a flood policy, which is usually sold separately from standard home policies. It covers water coming from the ground up, as opposed to, say, rain coming through a hole in the roof.

Crisis facing homeowners
Storm surge and flooding spearheaded much of Ian’s more than $67 billion in estimated damage. Early analysis shows the overwhelming rush of waters also played a big role in bringing about the most deaths from a storm to strike Florida since 1935 — at least 114 in the state.

Yet, for those not forced to carry policies by their mortgage holders, even the purchase of flood coverage has been declining over the last decade amid rising costs and other factors, a Coastal Star analysis found in 2020.
Boynton Beach, Briny Breezes, Delray Beach, Highland Beach and Ocean Ridge all had fewer policies in 2019 compared to 2012 for coverage issued by the National Flood Insurance Program, the provider of more than 95% of flood insurance in the county. In Briny Breezes, the number of NFIP policies fell by more than 40%.
The most concentrated harm from Ian came along Florida’s southwest coast, though its reach extended wider. A tornado spawned by the hurricane caused property damage in Delray Beach, for example, and another possible twister downed a tree at Gulf Stream Town Hall and blew tiles off its roof.
Going without hurricane coverage is an option open only to those who own their properties without a mortgage. It might make sense for people wealthy enough to rebuild out of their own pocket. It is a riskier gamble for those who have most of their assets tied up in their most valuable asset, their home, and now struggle to find income to keep up with the premiums.
Lack of coverage also has implications for the region’s economy and ability to recover from a future catastrophe if fewer people can afford to rebuild.
Florida’s home insurance premiums are rising an average of more than 30% a year, according to the industry-funded Insurance Information Institute. The state’s average bill hit $4,231 over the summer, nearly three times the U.S. average of $1,544.
That Florida average price tag can easily run double, triple — or more — near the coast in a place like southeastern Palm Beach County.

Fewer choices for residents
Inflation and rising home values are keeping more people out of the state’s insurer of last resort, Citizens Property Insurance Corp., which does not cover properties worth more than $700,000.
Regulators have been considering raising that limit in markets such as Palm Beach County where options for private insurance have become extremely limited, published reports show. The cap is currently $1 million in Miami-Dade and Monroe counties.
Samantha Bequer, communications director for the state’s Office of Insurance Regulation, said her office “is still in the process of reviewing all applicable data before issuing a determination on raising the eligibility cap.”
Meanwhile, a dwindling roster of Florida-based companies is writing new policies in South Florida, agents say.

Boca Raton-based Florida Peninsula Insurance Co., which insures about 180,000 homes, condos and apartments around the state, and subsidiary Edison Insurance declined comment on their outlook for expanding, contracting or keeping their customer count about the same.
The companies are “fully focused on assisting our policyholders that were impacted by Hurricane Ian,” said chief legal officer Stacey Giulianti. “This is our obligation to them. Right now, we cannot comment on underwriting until every one of our insureds receives the help they need to make repairs or rebuild.”
In some communities, slim choices may represent an opening for “surplus lines” companies, which are often based overseas, with rates that are not regulated by the state.

Other reasons for increases
Some industry groups blame roof scams and lawsuits for making things worse. Florida accounted for less than 10% of the nation’s claims but around 80% of the lawsuits, said Mark Friedlander, Florida-based spokesman for the Insurance Information Institute. 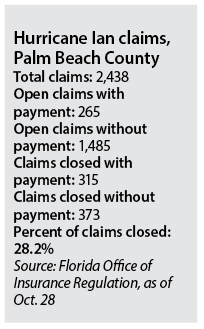 Six insurers fell into insolvency this year and 27 other struggling Florida residential insurers are on the insurance regulator’s “watch list,” he said.
His group estimates the insured losses from Hurricane Ian will exceed $60 billion, making it the second-largest U.S. catastrophe on record behind 2005’s Hurricane Katrina, which reached $90 billion in today’s dollars.
“We have forecasted litigation expenses from disputed Ian claims may run $10 billion to $20 billion,” Friedlander said. “This could lead to the failure of several more struggling Florida home insurers.”
But some state legislators have questioned if this fully explains why insurers fail, since companies can generally pass on legal costs in their rates.
In a special legislative session in May, state Sen. Gary Farmer, D-Fort Lauderdale, called it a “joke” that state regulations let company owners put up only $15 million in capital, framing that as inadequate to meet modern financial challenges.
Skeptical lawmakers also have questioned the shifting of money between insurers and affiliated companies that owners control, which can weaken the core insurer.
If the going gets rough, owners of weakly capitalized domestic insurance companies often wind up walking away and leaving consumers on the hook to pay off remaining claims through assessments on insurance bills statewide. One such 1.3% assessment has been imposed this year for claims associated with the failed Orlando-based St. Johns Insurance Co. and other, smaller firms, for example.

Past insurance failures
Official state reports on why insurers fail can take many years to become public, but those that have emerged going back a decade or more offer some glimpses.
Take a 2017 report on Miami-based Northern Capital Insurance Co. It agreed to take up the policies of up to 40,000 Citizens customers, largely in Miami-Dade, Broward and Palm Beach counties, before eventually going out of business.
The company’s receiver filed an action against the directors and officers of NCIC for breach of fiduciary duty, negligence, and questionable diligence concerning transfers of money, state records show.
The company’s surplus, or money set aside to pay claims, fell to negative $4 million at one stage. Yet it paid substantial “management fees” to a company its owners controlled, and its parent company paid nearly $1.1 million in dividends to “investors” — including current and former company officers and directors, and companies they controlled — a year before liquidation, records show.
A 2016 report on Jacksonville-based Sunshine State Insurance Co. highlighted millions of dollars in payments shuffled between parent and sister companies without written agreements or regulatory approval. It noted a $200,000 bonus for the president the year before state regulators placed the insurer in liquidation. He said in a meeting he felt he deserved a $600,000 bonus, according to the state report.
In 2015, a report on Tampa-based Homewise Insurance Co. found it was crippled by an “excessive outflow of cash” to its affiliated management company, including $63 million in one year alone. That was used to pay, among other things, “significant executive and management salaries and benefits.”
Or consider Hollywood-based Coral Insurance Co., liquidated in 2010. The reasons for its failure included, in the order cited in an insolvency report: mismanagement by officers, inadequate capital and surplus, and underwriting losses.

Hurricane season’s impact
More than 415,000 residential property claims have been filed from Ian as of Oct. 28, with 25.5% reported “closed,” state records show. About 28.2% of the 2,438 claims in Palm Beach County had been closed.
The good news for homeowners and businesses is that only one month is left to the 2022 hurricane season, which ends Nov. 30. They may still get a shock in the mail when their new premiums arrive, but they may at least luck out and not have to file any windstorm claims themselves this year.