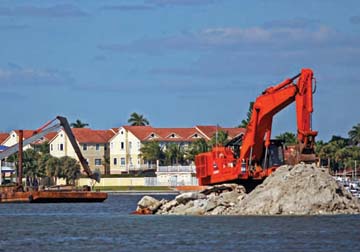 Dredging crews have been gathering sand and rocks from

the Boynton Inlet for months to improve the navigation there. Some the the materials are being used to create the

Large rocks are being used to armour the inlet jetty.

It was serendipity that excavation of the Boynton Beach Inlet sand trap happened to coincide with the building of two mangrove islands called Grassy Flats in the Lake Worth Lagoon.

On one hand, county officials had non-beach-compatible sand and rocks that needed to go somewhere and, on the other hand, an eco-project for which they were about to spend $500,000 for sand.

That was an aha moment for Dan Bates, deputy director of Palm Beach County Environmental Resources Management, who saw the happy coincidence of two projects coming together and the chance to save a half-million dollars in the process.

“We couldn’t have planned it better. As the inlet project was going on, Grassy Flats was coming up, and we had a great opportunity. The sand and rock byproduct that can’t go on the beach was perfect for this project,” said Julie Bishop, environmental director for the Palm Beach County Department of Environmental Resources Management.

The Grassy Flats Lake Worth Lagoon Restoration Project, which will create 10.5 acres of seagrass habitat and 1.1 acres of salt marsh, will increase the food and nursery habitat for fish, manatees and wading birds while improving water quality. Work is expected to be completed by the fall of 2014.

Starting in mid-December, one to two barges a day loaded sand and rocks at the inlet and transported it four miles north to the Grassy Flats project on the east side of the lagoon near the Palm Beach Par 3 Golf Course.

Rocks that are too big for the new islands will go to an artificial reef near the inlet, she said. Beach-compatible sand is put on nearby beaches.

The sand and rocks from the inlet sand trap will be pumped onto the islands to cap the muck sediments that had created a “dead zone” with poor water quality and very little plant habitat.

About 1 to 2 feet of muck sediment — including pesticides and fertilizers —was deposited in the lagoon over time by the C51 Canal. Some of the sediment came from Lake Okeechobee and the rest from the canal basin.

“We actually get discharges to Lake Worth Lagoon from three canals,” she said, adding that the area is far from ocean inlets, and there’s not a lot of natural flushing of the lagoon water.

The new sand will create two islands where 2,900 red mangroves and 25,000 plugs of cordgrass will be planted, which will support wildlife and oyster habitat and improve long-term water quality.

“We’re getting wonderful support from grants,” she said.

“We’re going to cap those muck sediments with clean sand and restore a natural sand bottom with over 10 acres of seagrass habitat, and we expect water quality improvement,” she said. “We will create mangrove islands and a ring of rock to provide oyster habitat.”

The area won’t be called the “dead zone” again, she said.

“That is changed. We’ve done over $20 million in restoration,” she said. “We will have a great positive impact on this area. We will see a return of wildlife, wading birds, manatees and mangroves, which work as fish nurseries,” she said.

The two mangrove islands will be exposed at low tide and underwater at high tide when completed, she said. The cordgrass will go in first, acting as a stabilizer until the mangroves take hold in one to two years.

The county hopes volunteers will help plant the islands this summer.