The orange-and-gray iguanas are the primary breeders in the colonies often found along the coast, according to exterminator Keith Shepherd. Photos by Jerry Lower/The Coastal Star

Tony Chateauvert, head pro and manager of the Palm Beach Par-3 golf course on State Road A1A, says he has spent $1,500 each of the last two years — and figures he’ll do the same in 2022 — to curtail the iguana population on his course.
“The guy comes out in the morning, shoots them out of the trees, they come tumbling down, and we put them on the menu Tuesdays and Fridays,” he said.
Chateauvert was joking, but the absence of any killing cold weather in recent years and iguanas’ desire to live near fresh water have meant the invasive reptiles are an increasing headache for golf courses on the barrier island.
“They’re so proficient at procreating, and they get bigger and bigger,” Chateauvert said. “They’re not aggressive, they don’t bite people, but they do have salmonella, and they burrow under the sea wall, which is a problem. They also burrow under the banks of the pond, which creates erosion.” 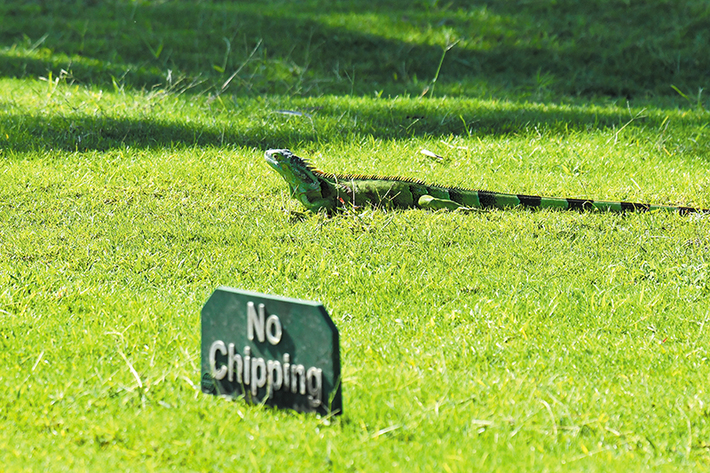 Although iguanas do not attack or generally disturb golfers, they eat plants and damage the ground with their burrowing.

Jason Holmes, who oversees the par-3 course at Red Reef Park for the city of Boca Raton, says iguanas are “becoming an issue we have to deal with.”
“We haven’t hired anybody to address it, but we are seeing an increased number of them, and all that goes along with it. One of the biggest problems we have is they do some burrowing, which causes some issues for the golf course.”
Glen Terranova, superintendent at St. Andrews Club, which like the other two courses has several holes along the Intracoastal Waterway, said that’s not the only damage iguanas inflict.
“They eat the hibiscus flowers … and really any plant they can find,” he said. “They don’t mess with oleanders, because they could be poisonous, but hibiscus, they eat all the flowers.”
The hibiscus “is one of their favorites,” Holmes said. “We notice the damage more there because it’s an ornamental flower.” Keith Shepherd, who hunts iguanas in his time away from his full-time job as a coastal police officer, has yet to be summoned by a golf course but has customers whose homes are alongside them.
“They do a lot of damage,” said Shepherd, whose business, Ten-Seven Iguana Removal, refers to the police code for off-duty. “They burrow into the banks, and the biggest complaint I get is the poop. It’s like having a bunch of small dogs running around pooping everywhere.”
Chateauvert and groundskeeper Tim Campbell have hired Enviroscapes Plus, a landscaping company from Plantation, to address their problem. Owner Johnny Cannon said he’s used a pellet gun to harvest about 100 iguanas from the course over two days each of the last two years.
Chateauvert’s course attracts a number of tourists, and he’s seen their attitude toward the reptiles change quickly.
“It starts out with, ‘Oh, the cute iguanas,’ and they take pictures of them. Then it’s, ‘Oh, look at the size of ’em,’ and ‘They’re all over the place.’ They mostly run away from humans, but the big ones sort of lie there. They’re nasty looking.”
Shepherd said the orange-and-gray variety, which can grow up to several feet long, are more destructive as they eat more and poop more.
“They’re the breeders,” he said. “And they have territories. From my experience you’ll see an orange one every four or five houses. You shoot one and there’s another waiting to take over the territory.”
He said three half-hour roundups a few days apart will typically cut the numbers significantly.
But the iguanas are smart.
“They get used to people hunting them,” Shepherd said. “Their first defense is to hold still. Sometimes you feel like you’re being watched, and then you spot them standing 20 feet away.
“I have a diesel truck and after three or four visits they’ll start running before I get out, so I have to park down the street and walk up.”
Terranova said he hasn’t gone to what he considers the “extreme” of buying a gun — Shepherd uses a pellet gun with .177 ammunition — or calling in outside help yet out of consideration for his members, many of whom live in condos overlooking the course. “A lot of members just like them,” he said. “They’re not moving their golf balls, they’re not running in front of them, they’re not disturbing them yet. I do have people who say they don’t want hibiscus plants because the flowers disappear. So that could be an issue as time goes on.”
Holmes, who said he’s been on the job only about six months, said he’s considering taking the Red Reef situation to the Boca City Council and that hiring a contractor could be in the offing.
“We have not taken the steps to address it at this point,” he said. “But that’s probably not far off.”
The one phenomenon that could make a difference is a sub-freezing cold snap, though it’s been years since South Florida has experienced one.
Cold slows the blood of these cold-blooded reptiles, eventually leading to death.
“I hope it freezes in January, goes down to 28 degrees for two days,” Chateauvert said. “That would do it.”

LEFT: The sea wall along the parking lot and the first hole at Red Reef Park’s par-3 course in Boca Raton is home to dozens of iguanas that sun themselves on the concrete and eat grass.