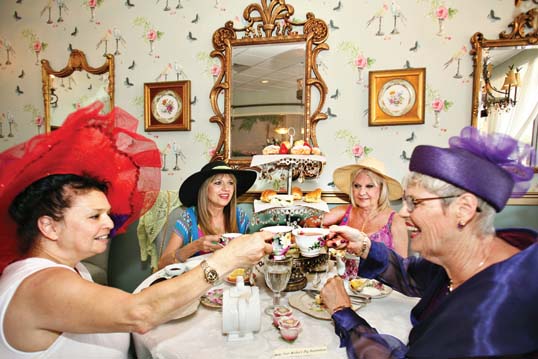 in Delray Beach. The women meet all over the state to try different tea rooms. 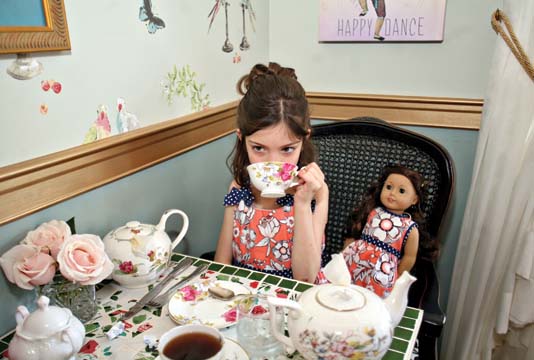 The Abigail Rose at TeaLicious offers a variety of freshly made canapes,

Those looking to take tea with Mom near her big day this month have a few traditional choices, or they can go mod at the Ritz-Carlton.
Afternoon tea — the ritual of a pot of tea served with little sandwiches and sweets on silver trays —  has given way to test tubes and whoopie pies at the Ritz in Manalapan.
Hotel spokeswoman Christine DiRocco explains, “It’s more like a coffee break. Tables are set for couples. We bring a pot of water and you choose your teas — they’re loose leaf — from test tubes. The server presents an assortment and then pops the cork on them and lets you sniff.”
They’re served with a few sweet tidbits, also contemporary. Red velvet whoopee pies, Temple Orange marmalade with scones, the house-made banana bread and a chocolate-covered strawberry are among the offerings.
“We’re keeping it more casual,” DiRocco said.
That’s in contrast to the Victorian-style teahouse set up in Delray’s Tealicious Tea Room.
Mirjana Matesic, the owner, said her version of the tea is more like a high tea — the afternoon meal for commoners — with more substantial sandwiches and sweets. “We serve high tea any time of day — we embellish it.”
The terms “afternoon” and “high” tea confuse Americans who eat on a different timetable than most Europeans, she said.
“Europeans eat a later lunch that stands in for dinner, and they need something in their stomachs to tide them until bed later. High tea is an actual meal, and it was served at home. Afternoon tea was served with the scones and clotted cream, light finger bits, and served in the grand hotels as an afternoon break from shopping or socializing.”
The term “high tea” refers to the height of the home dining table, versus the lower tables set in most parlors around tufted chairs and sofas.
Her version is set in a tearoom reminiscent of English parlors, with mismatched chairs, table linens, flowers and the three-tiered trays.
The prix-fixe meal includes soup and salad, and a variety of canapés like stuffed mushrooms and mini-quiches, which are followed with several hot and cold sandwiches — walnut chicken salad, grilled chicken panini, turkey reuben and a smoked salmon croissant. Crab and shrimp salad, spanikopita, crab cakes and a vegetarian hummus with grilled eggplant, sweet peppers, tomato and fresh mozzarella bring a different flavor to this tea. The classics, egg salad and cucumber sandwiches, also are available.
More than 60 teas are offered — and Matesic can tell tea-goers about the health benefits of each. “We have green teas and teas for detox. I drink teas for my health.”
But she appreciates those who want the true experience and offers them to both adults and children — the Princess Tea for is just for youngsters aged 5 to 10.
“Of course, we serve scones we bake here every day. We fill them up,” Matesic said. “Some leave with a doggie bag.”
A similar but scaled-back version is at the Chesterfield in Palm Beach, a Brit-owned bed and breakfast. In their cozy library, among stuffed chairs and the low tables, they present a selection of traditional and flavored teas, scones, clotted cream, preserves, pastries and four sandwiches — egg salad, sliced cold chicken with arugula and herb mayonnaise, cucumber with butter, and smoked salmon with a dill cream cheese.
Also available here is the “cream tea” — the tea service with only scones and cream.
Chesterfield spokeswoman Joy Groover said groups can arrange the “Victorian tea experience,” with tea-leaf readers and women in Victorian dresses lecturing on the history of tea, and tea etiquette.
A special afternoon tea luncheon also is presented at the Café des Beaux-Arts at the Flagler Museum for Mother’s Day weekend. In season, the tea lunch is served Tuesdays through Saturdays.
The Breakers no longer offers afternoon tea.
For a proper tea, there are rules, of course.
Greet the host or hostess first, then other guests.
The hostess always pours if a butler or maid isn’t present, and in her own good time. She may ask if you’d like sugar and how many lumps. Two should be a maximum.
If using sugar or lemon in the tea, the sugar goes in the cup first, then a thin slice (never a wedge) of lemon, then the water poured over the strainer full of loose teas (never bags — an abomination to traditionalists).
Milk goes in last, if at all. The superstition is “to put milk in your tea before sugar is to cross the path of love” — perhaps leaving you unwed. Lemon and milk (not cream) are never served in the same cup as the milk will curdle.
The spoon is always placed behind the cup on the saucer and never left in the cup.
The cup is lifted by holding the cup handle with thumb and all four fingers; the pinky-up move is an affectation. It’s impolite to look over the rim of the cup as you drink.
If you are not served by a butler, use  fingers to choose one or two small items from the trays. Typically, the savory foods are eaten first, but since scones are baked especially for the teas, you’re encouraged to eat these first while they’re warm. Scones are split with the knife and cream and preserves are placed on the serving plate. Condiments are spread on each bite separately. No proper tea foods should require fork and knife; they’re eaten out of hand.
Leading up to Mother’s Day, the teas in area tearooms are booked ahead; reserve in advance and for large groups at any day. For the special Tealicious Tea Room Mother’s Day tea, there are two seatings and by reservation only. The Chesterfield and the Ritz-Carlton will offer Mother’s Day brunches instead.