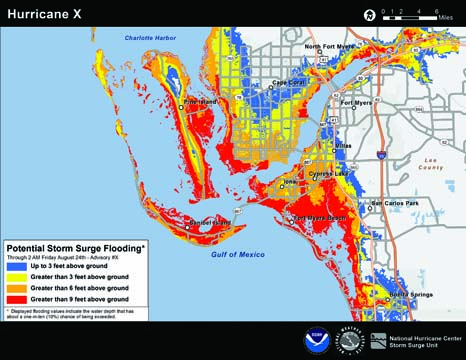 In the wake of Hurricane Sandy, coastal residents learned the hard way about the dangers of storm surge.
Sandy didn’t do its damage with high winds or torrential rains, but rather with large swells and powerful ocean waves that washed millions of tons of sand off beaches and from underneath beachside condos, and took out sea walls and swimming pools.
This hurricane season, which started June 1, South Floridians will navigate storm warnings with the help of new “Potential Storm Surge Flooding Maps” that will be issued by the National Oceanic and Atmospheric Administration’s National Hurricane Center.
The center’s Storm Surge Team was on the Gulf Coast in late May raising hurricane awareness, said Dennis Feltgen, an NHC meteorologist. And that awareness included the dangers of surge.
Hurricane warnings in the past have not included detailed advisories about surge, and, to make matters worse, the danger of storm surge generally doesn’t correlate to high wind speeds. Even tropical storms and Category 1 or 2 hurricanes can cause life-threatening waves and flooding.
Floridians’ relief that Hurricane Sandy had bypassed them was short-lived.
The second-costliest hurricane in U.S. history ultimately caused $68 billion in damage on the entire Eastern Seaboard, and most of it came from surge, according to NOAA research.
The new maps were developed over several years in consultation with broadcast meteorologists and others. The maps will show land areas where, based on the latest NHC forecast, storm surge could occur; and how high above ground the water could reach in those areas.
Factors the maps will take into consideration include the hurricane’s landfall location; storm intensity, size, forward speed, and angle of approach to the coast; the shape of the coastline; the width and slope of the ocean bottom; and local features such as barrier islands, bays, and rivers.
The center will update the maps every six hours with each full advisory package. Due to the processing time required to produce the map, it will not be available until about 45 to 60 minutes following an advisory release.
The maps will typically be issued when a hurricane or tropical storm watch is first issued, or about 48 hours before the anticipated onset of tropical storm force winds.
Based on the forecast movement and intensity of the tropical storm or hurricane, the maps also take into account likely forecast errors and estimates of worst-case scenario flooding of normally dry land.
The center estimates a 1-in-10 chance that the storm surge flooding at any particular location could be higher than the values shown on the map. The map is created from multiple runs of the Sea, Lake, and Overland Surges from Hurricanes model, known as SLOSH.
The new maps will be shown on TV weather forecasts, the Weather Channel and in an interactive display on the NHC website: www.hurricanes.gov.