Health agencies in Palm Beach County will receive 9,000 COVID-19 vaccine doses during the first week of February, an agency chief said, a sign of change after outcry about overwhelming reliance on Publix to distribute doses locally.
If the vaccine supply keeps growing, that could open the door to inoculating the general public by late spring or summer, said Alina Alonso, director of the Florida Department of Health in Palm Beach County.
“We need to keep those expectations realistic and continue to realize that it’s a matter of supply and demand,” Alonso said.
Her comments Feb. 2 to the County Commission came after state officials said they expected an increase of about 40,000 weekly doses from the federal government, up from around 266,000 arriving in the state each week. That allows more vaccine to flow to counties.
By Feb. 1, nearly 11% of Palm Beach County’s residents, or more than 160,000, had received at least one shot, with more than 20,000 receiving both shots. That vaccination percentage topped peer counties including Broward and Miami-Dade.
Still, there remains a considerable way to go in a county of 1.5 million people, including more than 360,000 people 65 or older, according to census data. And exactly how doses get distributed has remained a hot topic.
For week after week, scarce supplies have made a vaccine jab seem like a long shot.
“I feel like I won the lottery,” said Debbie Miglis, 65, one of 50 people to get shots in Highland Beach in January after appointments through town government there filled up in 97 seconds.
For others, the quest has involved rising before dawn on selected days when Publix offers appointments online, only to find spots quickly taken in most cases. That has meant starting over the next available day. 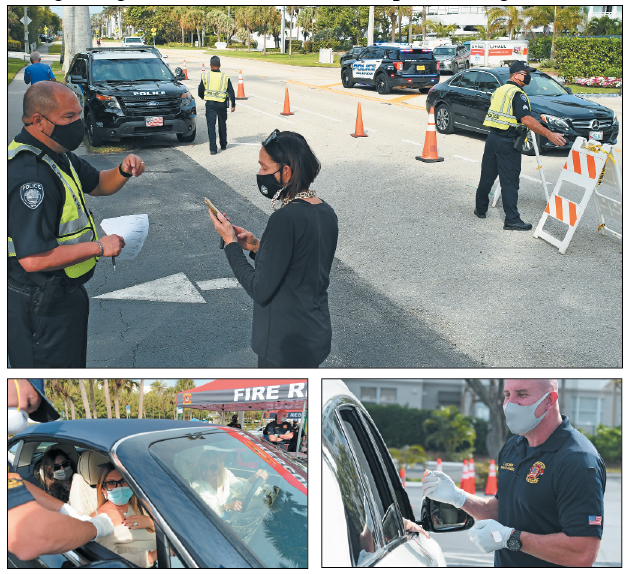 TOP: During a Jan. 15 vaccination event at St. Lucy Catholic Church in Highland Beach, police direct traffic and answer questions.
ABOVE: Resident Debbie Miglis receives a shot. LEFT: A Delray Beach paramedic gets ready to give a shot to one of the 50 people who received first doses.
Photos by Jerry Lower/The Coastal Star

County Commissioner Melissa McKinlay, who raised concerns about vaccine access for residents in the Glades and other communities not near a Publix pharmacy, also pressed Alonso about creating better ways for people to sign up for appointments.
On Jan. 29, the state launched myvaccine.fl.gov, a website that was supposed to let people 65 and older and other eligible individuals get preregistered so they can be contacted later when appointments are available.
But within hours, Alonso said her agency would discourage residents from using the new system because no appointments were available. She said the focus would be on clearing a backlog of appointment requests on her department’s own system that previously led local health agencies to stop accepting new inquiries.
Palm Beach County residents can still use the new state site, Alonso’s agency said, “but at this time, appointments are not available in Palm Beach County for those registering in this system.”
At the Feb. 2 meeting, McKinlay said Alonso’s position on the new system’s use “is pushing people to other counties.”
Alonso said she did not like waiting lists, which can leave people “frustrated” if they don’t deliver quickly.
Palm Beach County Vice Mayor Robert Weinroth, whose district covers portions of the county’s southeastern communities, has noted the county’s Health Care District released a preregistration website at vaccine.hcdpbc.org.
The health district “advised they are still working with the existing state reservation list with the Florida Department of Health,” Weinroth told constituents by email. “New sign-ups will go into a virtual waiting room until they complete the list and begin accepting new reservations.”
Boca Raton Mayor Scott Singer said he has advocated for a more integrated and accessible system to register for vaccines.
“Like many of you, I’ve been frustrated at the many different places to sign up,” Singer told residents by email. “For weeks, I’ve called upon the state to centralize sign-ups.”
He said he made repeated requests to the governor’s office and state agencies for “equitable access,” such as offering telephone as well as web options, which the state’s new system does include.
The flow of new doses to local health agencies as well as to Publix signals a change of course for Gov. Ron DeSantis, who earlier defended making the supermarket chain the primary conduit for vaccine distribution in Palm Beach County.
County Mayor Dave Kerner said he received a call from the governor after commissioners and others made their concerns clear: “He said message received.”
Currently eligible for vaccinations in Florida are state residents 65 and older, residents of long-term care facilities, health workers with direct patient contact and others deemed “extremely vulnerable” to COVID-19.
Controversy has attended the distribution of vaccines since they began arriving more than a month ago.
“It’s the hottest subject for all,” Highland Beach Mayor Doug Hillman said.
Highland Beach Town Manager Marshall Labadie noted in a Jan. 5 meeting: The town of Palm Beach “miraculously pulled a rabbit out and came up with some vaccines” when they were not widely available across Palm Beach County.
After an initial explanation that Palm Beach was uniquely prepared to start delivering 1,000 doses, Alonso later blamed “miscommunication.”