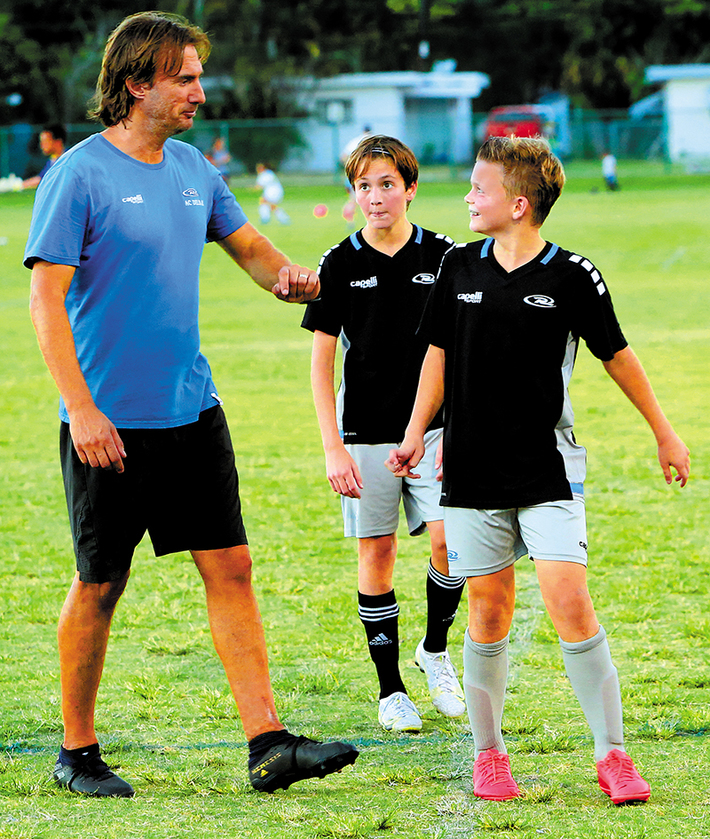 AC Delray Rush, a youth soccer program based in Delray Beach that features two prominent players from Gulf Stream, dominated the competition in both the Palm Beach League and South Florida United League last year, at one point winning 17 straight games on its way to a 32-7-7 record.

Having come to the decision that the group they had been coaching for four years needed a bigger challenge, coaches Luca Lagana and Tony Valdepenas decided to raise the stakes, moving its age 13-and-under team up to the prestigious Florida State Premier League, the highest level in the state.

“The group needed a better challenge and a better opponent,” said Lagana, who was born and raised in Italy and played five years in the Italian Third Division. “The idea is to challenge them. It’s going to be harder, so they need to prove to themselves they can play.”

The jump in competition meant a significant change in the size of the playing field, from 75 yards long to 100, and from 45 yards wide to 70. The goals increased from 7 to 8 feet tall and from 16 to 24 feet wide — the full-size dimensions.

“It’s a huge difference, especially for the goalkeepers,” Lagana said.

The adjustment was a struggle early, as the team dropped its first four games. But it then improved to 4-5-1 by late last month.

Eamonn Endres, a midfielder, and Louis Hansen, a forward, make the trip from their homes in Gulf Stream to the Seacrest Soccer Complex in Delray for practices three days a week and games all over the state on weekends.

“They’re good players and really good guys,” Lagana said. “It’s very enjoyable to have them in the group.”

Eamonn said he started playing soccer at age 2, but his father, David, a physical therapist who is based in New York City, said his son’s game really started to improve when he began working with a coach with a European-style approach in Brooklyn at age 8.

“He brought out the best in him, taught him how to train properly, rather than just going out and kicking the ball,” David Endres said. “How to work it like a process.

“He was with him for three years in Brooklyn, and when we came down here this year, Luca had a very similar philosophy, so Eamonn fit right in.

“Luca and Tony are really great,” he added. “They’re so inviting; they brought him in and everybody on the team made him feel part of the team very quickly. The parents, knowing I go back and forth to New York a lot, volunteered to help get him to practices and games. So, it’s been a great experience.” 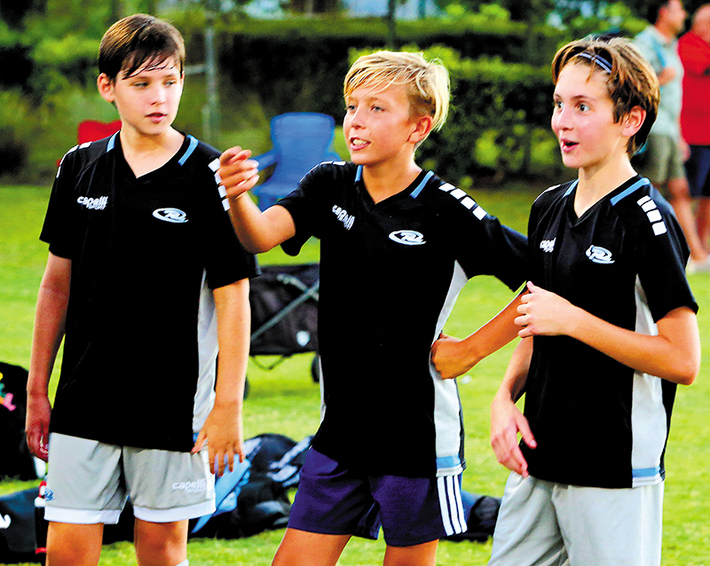 Louis Hansen led the team in scoring last year with 18 goals but spent the summer in Germany, not returning until mid-October. Although he spent time with a personal trainer overseas, the coaches determined his conditioning was not at a high enough level for him to play the full 90 minutes right away.

Nonetheless, he scored on a penalty kick in his first game back while coming on as a sub and playing just 25 minutes, then started and played 40 minutes his second game.

“The first game he drew the penalty and then converted it,” Valdepenas said. “He’s a phenomenal PK taker. Like a robot: He puts it in the lower right corner where no one can touch it."

“The second game we started him because the team we were playing, the Port St. Lucie Hurricanes, knew him and adjusted their defense to basically put two men on him, which opened things up for everyone else.”

Louis’ goal total actually dropped last year from two years ago, prompting criticism from his coaches for passing when he should have shot. Asked if he agrees with the long-held opinion that goal-scorers have to be selfish, Louis hesitated for a long moment before answering, “Yes.”

Valdepenas said Eamonn, meanwhile, has “fit in perfectly” with the team.

“That usually doesn’t happen, just because the spots on the team are so competitive,” he added. “They know they’re all working for a spot and there’s resistance when kids come in looking to take one. (But) Eamonn fit in well.”

Primarily a forward prior to joining the Rush, Eamonn has also adjusted to moving back to central midfield.

“It’s a bit of an adjustment to be more of a playmaker/ball mover,” Valdepenas said. “We encourage him to move up and take shots as well. But he’s definitely a big part of the team and doing really well.”

The highlight of Eamonn’s career came in May, when he scored four goals in a game against an all-star team from Orlando in the Bazooka tournament. The Rush reached the final of that event before losing to Port St. Lucie on penalty kicks.

The Rush, whose roster includes a girl, Kiana Sanchez, who primarily comes off the bench at right back, has been accepted into the field for the prestigious Dallas Snowball Cup Dec. 10-12 and is entered into a national tournament in Williamsburg, Virginia, next spring.

The latest state rankings have them 34th among more than 500 teams in their age group.

As for David Endres, he has nothing but good things to say about his son’s experience.

“He loves it,” he said. “Honestly, the kids on the team are his closest friends, and soccer is one of those sports where that happens.

“The kids on his teams become his closest friends and he spends the most time with them. It’s like a brotherhood — or in this case, brother and sisterhood.”

For more information on the team, visit https://acdelrayrush.com.