In Highland Beach, a television screen was placed in front of Town Hall so residents could see what was happening inside.

And in other cities and towns throughout coastal South County, chairs in commission chambers were cordoned off with yellow tape and elected officials took alternating seats on the dais to make sure they kept 6 feet away from each other.

For most local municipalities, finding ways to govern effectively during the unprecedented coronavirus crisis is requiring innovation, often aided by technology, as well as huge amounts of patience and flexibility.

“There are going to be as many ways to hold meetings as there are cities until things become clearer,” said attorney Glen Torcivia, whose firm represents Highland Beach, Ocean Ridge and South Palm Beach.

Conducting meetings while making sure the public has an opportunity to participate, as required by Florida’s Sunshine Law, is just one of the challenges that local governments face.

Another is the task of making difficult decisions at a time when situations change from hour to hour — and when no one knows for sure when everything will be back to normal.

Add to that the task of figuring out how to ensure municipal services aren’t interrupted and employees are safe while encountering new situations every day, and you can understand why city and town managers have a lot to be concerned with.

LaVerriere said that in some cases she would pull her leadership team together for a meeting in the morning but then have to call members back together in the afternoon to present new information and tell them to disregard what they heard a few hours earlier.
“You have to be adaptable,” she said. “You try to stay two steps ahead of what’s coming.”

Because circumstances change quickly, with information from health officials evolving and executive orders coming from the governor, many decisions that would have been made by a city council or commission are now being made by city or town managers.

In Boca Raton, for example, last month’s decision to order nonessential businesses to close was made by city staff members, led by City Manager Leif Ahnell.

That decision, which under normal circumstances might have been made by the City Council after discussion, was made by Ahnell with input from the mayor and council members.

“We’re in a situation where we are not the direct governing source,” said Delray Beach Mayor Shelly Petrolia. “There are a lot of policy decisions that the city manager has to make.”

She said waiting until a city commission could meet to make decisions in an emergency situation would be unwise.

“You would be well behind in every decision,” she said.

Petrolia said that Delray Beach’s new city manager, George Gretsas, has been in constant contact with her and other members of the commission, listening to their input and advising them of decisions he is making.

“He’s using us as a sounding board,” she said.

That same process holds true in a small town like Manalapan, where Town Manager Linda Stumpf is in daily contact with members of her commission.

“We have a fully engaged commission,” said Mayor Keith Waters, adding that Stumpf and commissioners are accustomed to working together even in non-emergency situations.

Last month, Manalapan canceled its commission meeting in a move similar to what Boca Raton did when it canceled its March 23 and 24 City Council meetings.

Waters, who credits the town staff and residents for making sure Manalapan runs smoothly during the crisis, said there weren’t enough pressing issues on the agenda to warrant holding a meeting in an emergency. 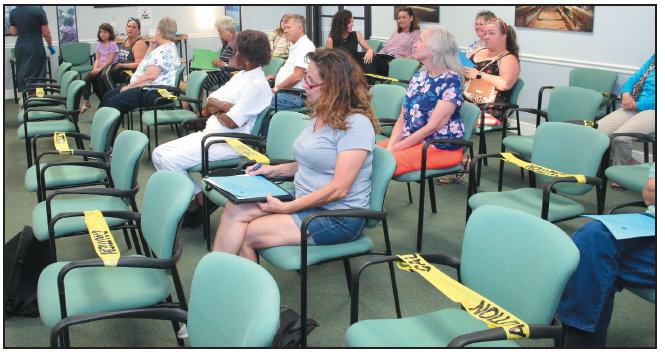 For many communities, however, the meetings are a necessity in order to ensure residents receive services.

“We’re trying to do everything we can to not debilitate the services we provide to the community,” Boynton’s LaVerriere said.

Municipalities in the area are all still working, although most are not permitting residents to enter the town or city halls. In some cases employees are working from home.

In Manalapan, where employees work in close quarters, Stumpf devised a plan where staff members alternate days working from home so as not to be within 6 feet of each other at the office.

For managers like LaVerriere, it’s often necessary to get commission approval before a contract can be signed or a major purchase can be made. There are also policy decisions that commissioners need to make that are timely but not urgent.

Recognizing the need for local governments to meet, Gov. Ron DeSantis signed an executive order last month that allows commissions and councils to meet electronically and to meet without a quorum.

“That was huge,” LaVerriere said.

While towns such as Lantana and Ocean Ridge initially continued to hold actual meetings in town halls, others switched to electronic meetings.

The ground rules say that the public must have a physical place to attend (large enough to allow social distancing) and hear all electronic meetings while the council members participate by phone. The place typically would be Town Hall.

One of the challenges for municipalities is figuring out how to ensure they comply with Florida’s open government laws, which require an opportunity for public participation in meetings.

“The optimal situation is that the press and public have an opportunity to be in the room,” says Florence Snyder, a First Amendment lawyer and strong advocate of the state’s open government laws.

Still, Snyder says, there has to be flexibility in emergencies. 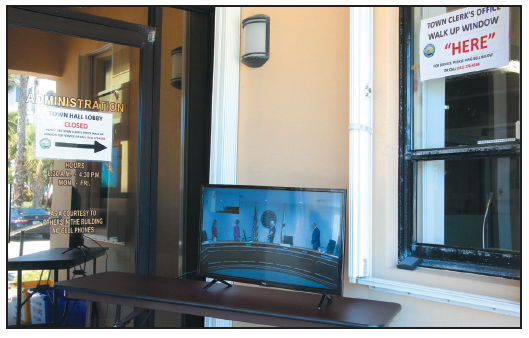 In Highland Beach, a television is set up outside to broadcast the live-streaming of the commission meeting.

“As long as we have government that’s accessible, that’s good,” she said.

Figuring out how to hold meetings electronically can be a challenge for some places, even in Boca Raton, Delray Beach and Highland Beach, which live-stream their meetings over the internet.

Some options include teleconference and conference calls with options for residents to be on the call. Another option being explored is to have meetings available to residents electronically with an option for them to send in comments via email.

Towns and cities along the South County coast hoped to have details worked out before their meetings this month.

Highland Beach Town Manager Marshall Labadie said his town is making a sincere effort to ensure the public has an opportunity to participate in meetings and he believes most other public officials are taking similar actions.

“We all want the public to participate because it is in the best spirit of good governance,” he said.

Labadie said that whereas municipalities already have plans for a hurricane, the COVID-19 emergency comes with uncertainty about when — and perhaps if — the way towns and cities govern will return to how they were just a few weeks ago.

“There’s no playbook for this,” he said.