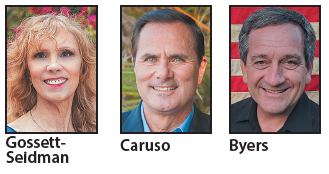 In the closest race, Highland Beach Commissioner Peggy Gossett-Seidman defeated newcomer Christina DuCasse with 52.6% of the vote, per unofficial results posted on Aug. 24. Gossett-Seidman, a Republican, will face Boca Raton City Council member Andy Thomson, a Democrat, for the House District 91 seat in November.
State Rep. Mike Caruso, moving into new House District 87, took 67.5% of the vote in defeating Republican Party activist Jane Justice. Caruso, who has spent more than half of the $208,000 he raised through Aug. 18, will face Democrat Sienna Osta, who has raised $4,900.
In Senate District 26, Republican Steve Byers took 58.8% of the vote to defeat William Wheelen. Byers will face incumbent Democrat Lori Berman on Nov. 8.
Gossett-Seidman, who won by about 500 votes from about 9,500 cast, spent nearly $194,000 in her race. DuCasse, a Russian-born American adoptee married to a Boca firefighter, spent less than $10,000 but had the support of the International Association of Fire Fighters Local 1560 of Boca Raton.
Gossett-Seidman, 69, raised nearly $290,000, including a $200,000 loan from herself. She credited her victory to hard work going door-to-door and her success in getting Tallahassee financial support for local projects.
Thomson, who had no primary challenger, has raised $225,000 but spent just $30,000. The district includes all of Boca Raton, most of Highland Beach and much of west Boca.
After four years representing the Delray Beach area and most of the South County barrier islands, Caruso moved into a new coastal district that starts at the Boynton Inlet and covers Hypoluxo, Lantana, Manalapan and South Palm Beach, as well as large swaths of West Palm Beach and Palm Beach Gardens.
He decried the split in the party that turned many local party members against him over his primary endorsement of Democrat Katherine Waldron, a Port of Palm Beach commissioner. He said he spent money fighting “untruths” that should have been saved for his Democratic rival.
Caruso, 63, said he took calls every day from voters concerned by allegations made by his opponent and that his campaign knocked on 14,000 doors.
“We need to come together as a party,” he said. “We’ve got to keep Florida red, keep Florida conservative and keep Florida free.”
Byers, 54, parlayed success in Amway sales into a consulting business, which did projects for IBM and the CIA, he said on his website. Among businesses he started since then is one as a beekeeper.
Byers sent out campaign mailers promoting himself and DuCasse. The mailers stated they were paid for by the Byers campaign but did not contain a similar disclosure on behalf of DuCasse, prompting criticism that they violated Florida election law.
Byers said he has not received notice of an elections complaint and he noted that the law says for there to be a violation it must be committed “knowingly and willingly,” and he did not know the flyer would pose a problem.
In his upcoming campaign, he said he would focus on insurance reform and reining in homeowner association overreach.
He lent his campaign $54,800 and raised an additional $1,665, while spending nearly $33,000 (including $5,000 to repay loans to himself).
Wheelen had been a party volunteer since 2015 and was honored with the local party’s Jean Pipes Award for Volunteer Service in March at a Mar-a-Lago dinner headlined by former President Donald Trump and Gov. Ron DeSantis.
Byers will face Berman, who served eight years in the state House and has been a state senator since 2018. Through Aug. 18, she raised $130,000 and spent $35,000.
Senate District 26 extends along the beach from Boca Raton’s Red Reef Park to the Boynton Inlet and stretches west to Belle Glade.