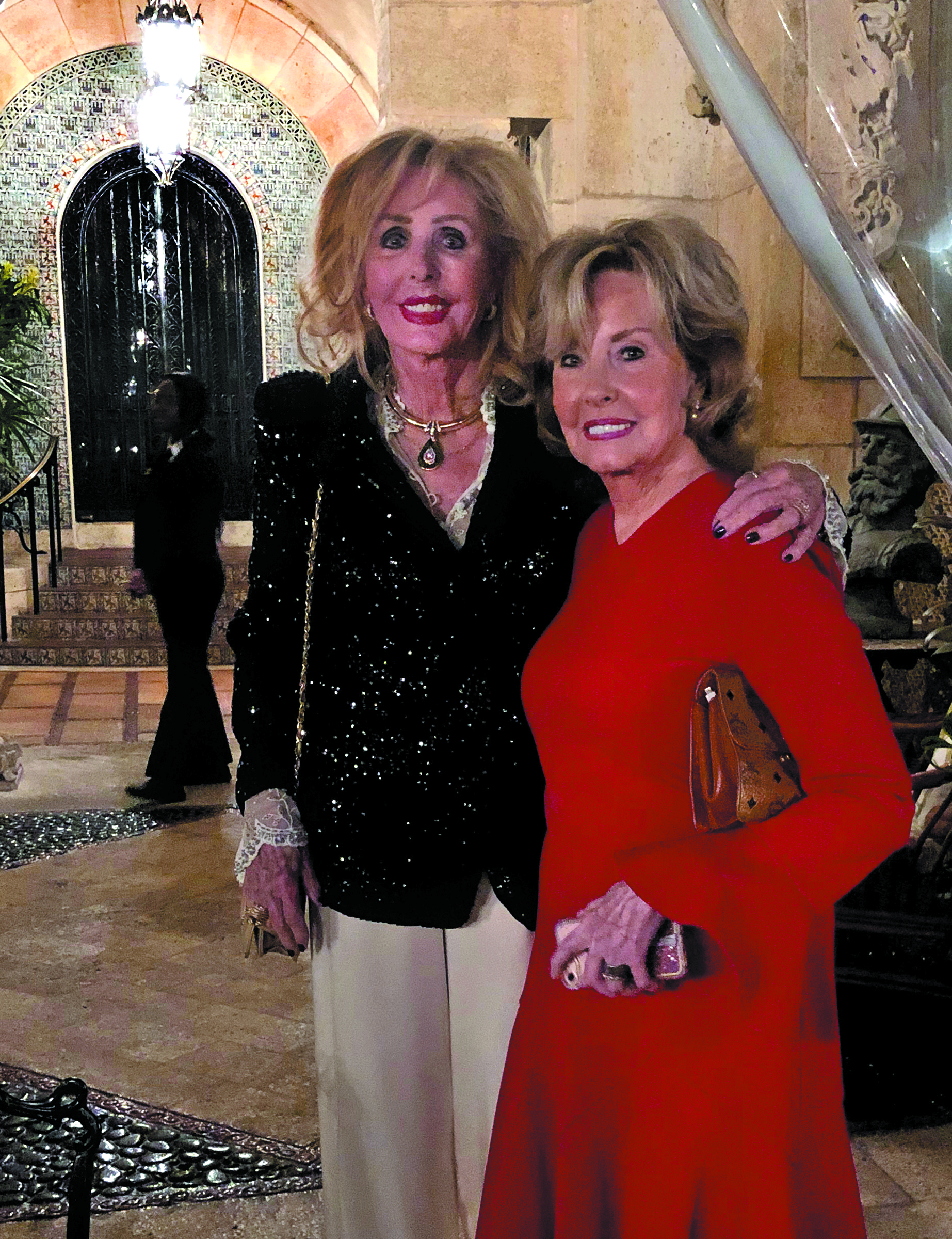 Beverlee and Jan met for the first time in February. ‘They’re so happy with me, thank God, and I’m so happy with them,’ Beverlee says of her sisters. Photo provided

A genealogy project Tim Schnellenberger and wife Anyssa started last year “just for fun” turned serious when they discovered his mother, Beverlee Schnellenberger, had three half-sisters she never knew existed.
“It’s so exciting,” Beverlee said March 16 at a party celebrating the 85th birthday of her husband, legendary football coach Howard Schnellenberger, at their home in east Boynton Beach. “They’re so happy with me, thank God, and I’m so happy with them.”
Beverlee, 81, invited about 50 guests to mark Howard’s milestone; among them was newfound sister Kathy Jeffers of Toronto, whom she had never met. Also on hand was younger sister Susan Simpson of New Jersey, who by coincidence has been visiting Palm Beach County for the last several years to compete in equestrian competitions in Wellington. The third sister, Jan Close of Chicago, didn’t make the trip.
“Everybody is so happy for us,” Susan said. “The story is amazing.”
Tim Schnellenberger said he “wasn’t looking for close relatives” when he initiated the process on the website 23andMe.com last summer.
“My dad is from Kentucky and my mom is from Montreal, and we don’t spend a lot of time up there to know who is who and what’s what,” he said. “So we saw where we came from and our background, and didn’t think much of it.
“But there was a message there that I didn’t see, and then I got a Facebook message from Susan’s daughter, who turns out to be my cousin. She said, ‘We did 23andMe as well and have a high-percentage match; we think your mom might be related to my mom and her sisters.’”
As it turned out, back in the mid-1930s Beverlee’s father had a brief affair with her mother, then moved on and never looked back. The baby was placed with a family and Beverlee was never told of her background, believing the couple that raised her were her birth parents.
“My father that raised me probably thought I was his child,” Beverlee said. “We think; we don’t know.”
Seven months later her biological father got married and raised a family with three girls. Both families resided in the Montreal area but never had knowledge of the other.
“Our father would have been thrilled to have a fourth daughter,” Kathy said. “He adored his girls.”
As weeks passed by and the evidence mounted, Tim remained skeptical. He decided to send a 23andMe kit to Beverlee’s sister Lynn in Montreal to determine whether they were actually sisters.
“And two weeks later it showed less of a match with Lynn than with these people,” he said.
Now it was time to tell his mother, and he chose the family’s Thanksgiving get-together at his parents’ house to do it.
“I said, ‘Would you be OK if it turned out Piff, the father you grew up with, wasn’t your dad?’ She said yes. Then I said, ‘I think you have some sisters.’ So I explained the story and she said, ‘You mean I have sisters?’ I said ‘Yes.’ So she started crying. I said, ‘You’re happy about this, right?’ She said, ‘I’m so happy.’”
Within moments they were on the phone calling Susan in New Jersey. “She picked up,” Tim said, “and they started talking, and haven’t stopped talking since.
“They’re really awesome people,” he added. “I would have loved to have had them as a part of our family the whole time.”
As the three lined up for photos at the party, it was Howard who noticed not only the physical resemblance but that they all even dressed similarly.
Said Kathy, “We always thought Jan was the bossy one because she was the oldest. Now we know Beverlee is the oldest, and she’s bossy too.”
Whatever hesitation there was among the sisters belonged to Kathy, who admits she’s the most conservative of the family.
“I was very concerned that it was my mother’s (child), and she had given the baby away,” she said. “So I was very hesitant to do it.” The testing proved otherwise. 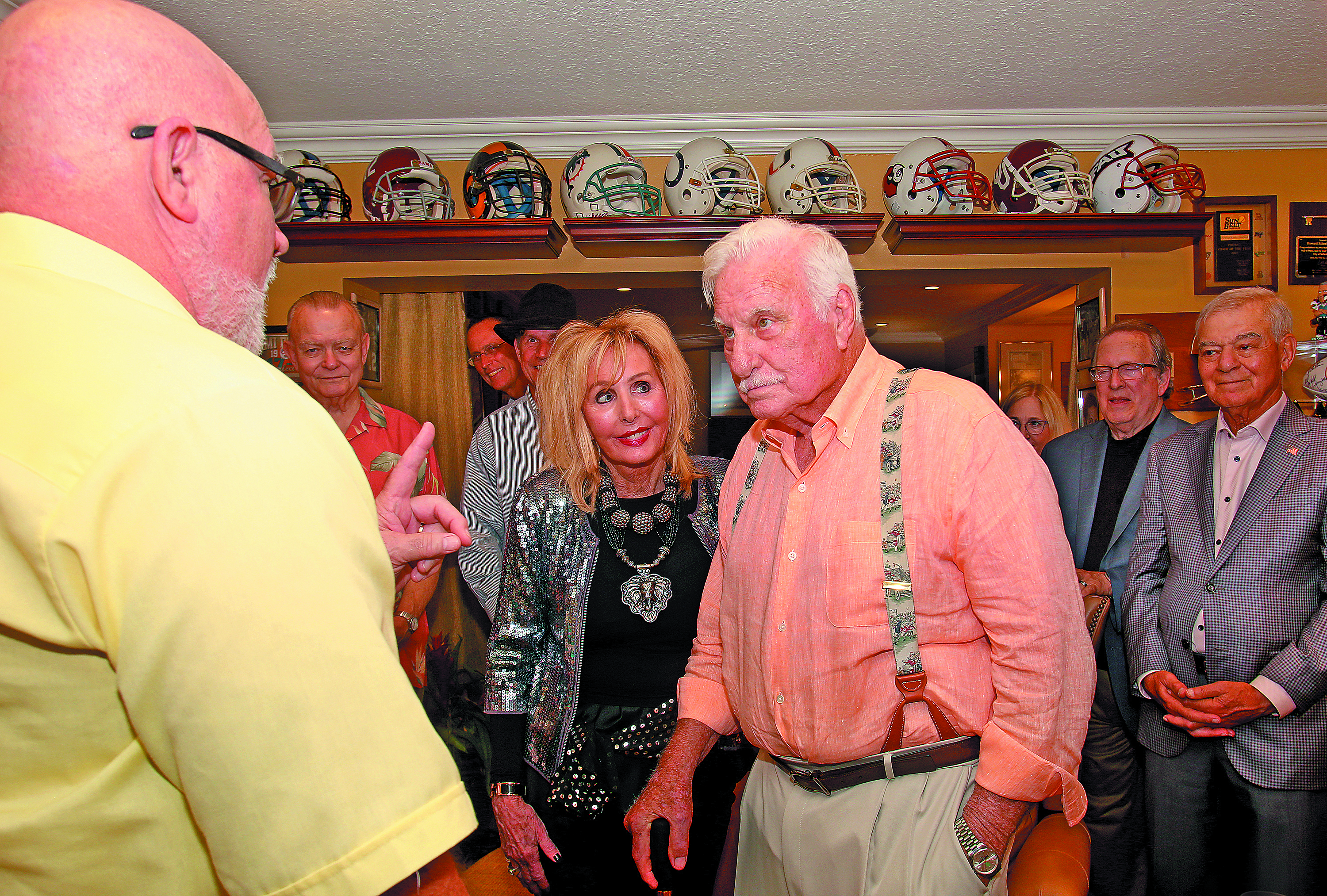 The Schnellenbergers renew their wedding vows before chaplain Leo Armbrust ahead of their 60th anniversary in May. Tim Stepien/The Coastal Star

The party guests, many of whom have been friends since Howard’s stint of founding the football program at Florida Atlantic University and at least a few who date back to his national championship season at the University of Miami, were buzzing about the sequence of events that brought the sisters together.
Susan’s husband, Rick Simpson, who describes himself as a huge football fan, said he “really didn’t know what to say” when he first heard the story.
“It took a while to digest,” he said. “Susan was ecstatic from the first minute, and then she and Beverlee got together and it’s like they’ve known each other for 30 years. I don’t even know how to explain it. I tell other people and they say, ‘Naw. It just doesn’t work this way.’”
Simpson, who owns a recruiting business, had some fun when he told his employees the story, purposely leaving out the Schnellenbergers’ last name.
“So one of the guys wants to know, and I tell him, ‘Well, he was involved with football.’ So he says, ‘What’s his last name?’ I tell him and he says, ‘You’ve gotta be kidding me.’ He was all over it. He knows more about Howard than Howard does.”
In another nice touch to the evening, Leo Armbrust, who has served as chaplain to both the UM and Miami Dolphins football teams, took the opportunity to renew Howard and Beverlee’s wedding vows as they approach their 60th wedding anniversary in May.
Moments after the ceremony ended, Tim Schnellenberger stepped out the front door of the house, lit a cigarette and told the story of how 23andMe had just changed the lives of himself and his parents.
“This 23andMe thing is pretty amazing,” he said. “There’s really a whole new world out there.”