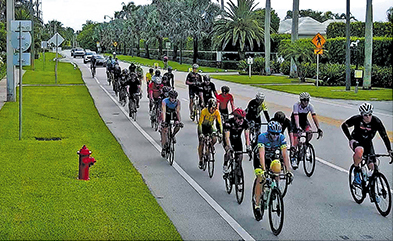 A new law requires cyclists to ride in a single file on sections of A1A with no designated bike lane. A surveillance camera captures a pack of riders taking up most of a travel lane while riding north near the Eau Palm Beach in Manalapan. Photo provided by Manalapan Police Department

After months of complaints from coastal police chiefs in south Palm Beach County, the Florida Department of Transportation has finally removed outdated bicycle-riding signs along State Road A1A.
But the agency still has not responded to requests to post signs reflecting new rules that took effect July 1.
The removal of the old signs in November eliminated a potential legal hurdle that prevented many coastal police departments from enforcing a new law that requires bicyclists to ride in a single file along sections of A1A with no designated bike lanes.
Those signs, reflecting an old rule allowing bicyclists to ride two abreast along road shoulders without designated bike lanes, finally went down the second week in November.
“It wasn’t just our municipality. Everybody up and down A1A and in Broward County was affected,’’ Highland Beach Police Chief Craig Hartmann said.
But the chiefs are still waiting for the DOT to post new signs and to offer a program educating the public on the new law, which allows police to crack down on pack cyclists who impede traffic.
“It makes enforcement almost impossible when you have a sign that says (riding two abreast) is permissible when in reality it’s not,’’ said Ocean Ridge Police Chief Richard Jones. He said he and other chiefs had made multiple requests throughout the summer to the DOT to remove the signs.
DOT officials did not respond to multiple requests for comment.

Bike lanes vs. shoulders
Cyclists are allowed to ride no more than two abreast only in designated bike lanes. But there are no such lanes, just narrow shoulders, along A1A in South Palm Beach, Ocean Ridge, Manalapan, Gulf Stream, Highland Beach and parts of Delray Beach and Boca Raton.
As the months ticked by after the new rules took effect, police chiefs voiced frustration over the DOT’s slow response to remove the old signs and offer clarification on the new law. It also allows motorists to cross yellow lines when they pass cyclists in an effort to maintain the 3 feet of separation required.
“At what point in time do we have the ability to start enforcing the laws that the Legislature has said are in effect? We can’t do it while the illegal signage is posted,’’ Jones said in an interview.
“Everybody is dealing with it, so I don’t know why the Department of Transportation can’t get their act together.’’
An hour after that interview, Jones sent another email to DOT officials — and offered to remove the signs himself.
“We previously reached out to DOT and we thought we had been lucky enough to get this resolved when a DOT contractor showed up to remove the signs,” Jones wrote. “However, the contractor was afraid to work in the rain and stated that they would return the next day. This was over a month ago and the signage remains in place. These signs prevent us from enforcing the new laws and they send the wrong message to bicyclists.’’
In his email, Jones explained that police chiefs in Manalapan, Highland Beach and other towns have told him they’re having the same problems.
“Is there anything that you can do to get this taken care of or should I just go remove them myself and store the signs for you all to collect?’’
Four days later, on Nov. 16, Jones received a reply from a DOT subcontractor who said eight signs from Manalapan to Boca Raton were removed on Nov. 9. The subcontractor said his crews went back out on Nov. 15 but couldn’t find any more of the outdated signs.
Jones said he is certain that as of Nov. 12 at least two of the old signs were still posted in Ocean Ridge. But after receiving the subcontractor’s email, Jones said he went back out and found that they’d been removed.
Hartmann and Manalapan Police Chief Carmen Mattox said old signs were removed from their towns, too.
Jones said he and other chiefs are glad the old signs finally went down, but they wondered why it took so long and happened only after months of complaints from local police.

Education material needed
The sign issues are just part of a larger problem with the DOT, some coastal chiefs said, because the agency also hasn’t responded to their requests to post new signs or offer a public education program.
“We’d been waiting for the signs to be removed,’’ Hartmann said. “But now that they’re down, there’s really not a clear understanding across the board on the new law. We’ve asked them to put out some educational information and we haven’t seen anything yet.”
One avid cyclist told The Coastal Star he saw an electronic sign stating the new law on A1A in northern Broward this summer. Jones said he hasn’t considered those signs because they’re too expensive for his small town. Several meetings to discuss a potential outreach program had been scheduled, with help from state Sen. Lauren Book, a co-sponsor of the new bike law. But each meeting was postponed because someone from the DOT was never available to attend, Jones said.
The only public outreach Jones has seen about the new law was a presentation this summer by the Palm Beach Transportation Planning Agency.
“How are people supposed to know what the rules are if the governing body, the Florida Department of Transportation, doesn’t do some type of outreach program to put the information on TV or signage on roadways where people are used to riding two abreast? They’ve done nothing,’’ he said.
In Highland Beach, the majority of bicyclists comply with the law and try to ride single file as far onto the right shoulder as possible, Hartmann said. When police see pack riders, which usually happens on weekends, they stop them and try to educate them, he said.
“It’s very challenging. It’s time-consuming and it’s tough to do safely with traffic coming in both directions,’’ he Hartmann said. “We’re hoping the state has more involvement with some of the education and attention to this.’’
Mattox said he was “waiting to see what the state’s going to do” before he commented on the new bike law.