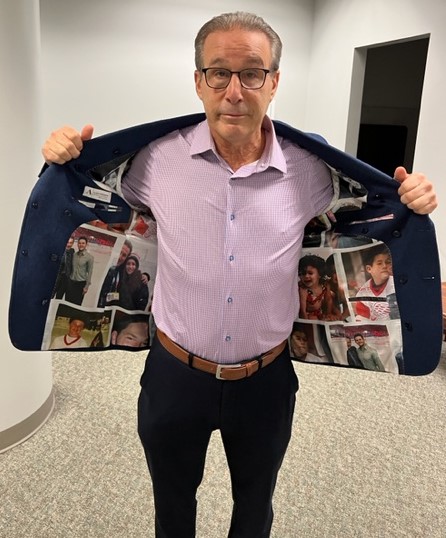 The inside lining of Ken Daniels' sport jacket had pictures of his son, Jamie, who died of a fentanyl overdose in December 2016 while in a drug treatment program under the care of Delray Beach physician Michael Ligotti. Daniels wore the jacket to the Monday, Jan. 9, sentencing in U.S. District Court in Miami of  Ligotti to 20 years in prison on an insurance health care fraud charge. John Pacenti/The Coastal Star

A look at the Florida Board of Medicine’s website would find Dr. Michael Ligotti in good standing.

No emergency actions. No discipline. No public complaints.

No indication of any investigation – criminal or administrative – of the Delray Beach physician who stood at the apex of an insurance fraud scheme in Palm Beach County that illicitly exploited drug addicts looking to recover during the height of the OxyContin crisis.

It would take a Miami federal judge’s order Jan. 9 for Ligotti to surrender his medical license after he was sentenced to 20 years in prison for defrauding insurers of $127 million on a whopping $746 million his Whole Health Medical Center billed.

He must also pay back a yet undetermined amount of money.

“I simply lost my way,” said a tearful Ligotti in front of U.S. District Judge Rudolfo Ruiz II as his wife and family watched from the gallery. He said he “failed miserably” at upholding the sacred oath of a doctor - to do no harm.

It has been 2 ½ years since the osteopath’s indictment.

Ligotti’s business moved addicts around like chess pieces, transporting them in vans dubbed “drug buggies” to associated sober homes and drug rehab centers in order to bilk Medicare and private insurance through fraudulent tests and treatment.

Each one got paid through illegal patient brokering.

“We trusted a system, shame on us,” Ken Daniels told the judge. “We trusted Jamie was living in a safe and sober environment, overseen by qualified medical professionals and staff, only to find out after his death that Jamie had been used for financial gain, your personal gain, Michael Ligotti.”

How craven was the patient brokering system? Lisa Daniels Goldman said outside the courtroom that the person who had lured Jamie into the sober home where he died contacted the family afterward through their son’s phone. The man had some of Jamie’s prize possessions—jewelry, headphones—that he would return for a fee.

Ken Daniels outside of court opened his sport jacket. Inside were photos of his son and his daughter through the years.

He is the play-by-play announcer for the Detroit Red Wings of the National Hockey League. The ESPN investigative news magazine E-60 did a story on Jamie’s death called the “Florida Shuffle.”

Ligotti joins a sad parade of those prosecuted under a crackdown on South Florida’s illicit addiction industry. He faced 13 charges of health care fraud and money laundering but pleaded guilty Oct. 4 to only one count.

He faced life in prison because his operation was so extensive—thus the plea bargain. He served as medical director for more than 50 sober homes, substance-abuse treatment centers and clinical testing laboratories, prosecutors said.

The bread and butter of the fraud was urine and blood drug testing of patients three or more times a week. The analysis was sent to labs, which billed insurers and paid kickbacks to sober home and treatment center operators. In turn, these businesses sent the patients to Ligotti’s Whole Health for additional testing and treatment.

In 2016, Ligotti sued an insurance provider for failing to pay him. He also would bully state regulators, writing to them in 2013 that he was outraged that accusations against Whole Health were made, claiming his name and license were used in an “unauthorized fashion,” according to the FBI’s arrest affidavit.

“We are happy to put an end to this tragic episode,” said Ruiz, noting the sentence was appropriate for the harm done.

He noted that Ligotti’s operation also undermined the faith families could have in drug treatment while costing all those with private insurance higher premiums.

But Ruiz did not remand Ligotti to custody. Like some others who have been convicted of sober home crimes, he will remain free to testify against others in trials this spring.

“This is nothing but privilege over justice,” said Maureen Mulroy Kielian, whose Southeast Recovery Advocates sounded the alarm about Ligotti long before his indictment.

She said most of South Florida’s drug treatment center woes can be laid at the feet of unscrupulous doctors.

“It’s not a sober home problem. It’s a treatment, medical director problem,” Kielian said. “There is no money without a prescription pad. It’s the same model as the pill mills. The minimum requirement is a Florida licensed provider.”

A check in the afternoon after Ligotti was sentenced showed no change in his status as a physician by the Florida Department of Health. His license remained clear and active.