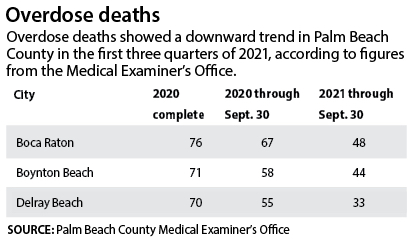 After a rocky 2020, fewer people died of overdoses in southern Palm Beach County cities during the first three quarters of 2021. Sometimes a lot fewer.
In Delray Beach, overdose deaths decreased 40% to 33 in the first nine months of 2021 compared to the same stretch of the previous year, according to the latest records available from the Palm Beach County Medical Examiner’s Office, which identified an “injury city” where an overdose occurred.
In Boca Raton, such deaths fell 28% to 48. In Boynton Beach, the decline was 24% to 44 deaths.
“We’re cautiously optimistic,” said Ariana Ciancio, service population advocate for the Delray Beach Police Department. “I want to knock on wood and be thankful where we can. But we can never be complacent about this. It ebbs and flows.”
In the last 90 days, upticks in some monthly reports of drug deaths locally and across Palm Beach County mean few are feeling complacent. All deaths take a toll. But many see evidence that efforts by first responders, community groups and others are having an effect.
For example, cases more than doubled in 2021 in which paramedics arrived after someone else had administered naloxone, whose brand names include Narcan, Delray Beach Fire Rescue documents show. That is medicine that can counter the potentially lethal effects of an opioid overdose.
Delray Beach paramedics used Narcan 118 times in 2021 through mid-December, compared to 161 times the full year before, records show. But people other than paramedics, sometimes denoted in records by the catch-all term “bystanders,” administered Narcan by the time paramedics arrived 100 times in 2021, compared to just 41 in 2020.
Delray Beach issues Narcan to police as well as fire-rescue responders. Records show city police used Narcan 70 times in 2021, Ciancio said. She said she did not have 2020 data at hand.
Even so, that would not account for all bystander interventions in 2021. Ciancio said community organizations have mounted a continuing push to educate and train people how to help.
For instance, about 50 people attended a public meeting at the Delray Beach Public Library on Dec. 1, where an overdose death occurred in the parking lot months earlier, officials said. The event offered naloxone training by members of the West Palm Beach-based group Rebel Recovery, whose website describes programs to offer peer support, reduce harm and assist people struggling with addiction to make “positive changes.”

‘Trial by fire’
At the same time, paramedics have been honing protocols to deal with fast-moving situations, said Sean Gibson, division chief of emergency medical services for Delray Beach Fire Rescue.
Responders have tried to calibrate carefully how much Narcan is needed to keep patients stable and breathing on their own, while assessing how much, if any, may have been administered before paramedics arrived, Gibson said. Too much too soon can leave people startled, upset or resistant to treatment at a hospital, he said.
Facing a pandemic since early 2020 on top of overdose calls, “it was a trial by fire for a lot of new paramedics,” Gibson said. “It’s been a long row to hoe, I’ll say that. But I think we’ve got a good group of people who have weathered it despite all the adversity.”
Overdose deaths recorded by medical examiners can vary from counts by police and fire-rescue departments, which may have on-scene information for certain cases without access to final medical reports for all deaths. By just about any account, though, 2020 was a tough year.
Delray Beach Fire Rescue recorded 64 overdose deaths in 2020, rising from 35 in 2019 and 18 in 2018 before falling to 11 in 2021 through mid-December. Emergency calls for suspected overdoses declined to 161 in a not-quite-finished 2021, down from 244 in 2020, 213 in 2019 and 214 in 2018.

Complicated by coronavirus
The first part of 2020 was especially rugged. Delray Beach police logged a doubling of overdose fatalities, to 42 from 21, in the first seven months of 2020 compared to the same period a year earlier.
The early stages of the pandemic not only threatened lives and jobs, but also temporarily closed in-person meeting spaces for support and recovery groups. Many scrambled to meet through Zoom or other online methods.
In 2021, a common approach was a hybrid of the two, alternating between gathering in person and virtually, said one participant who asked not to be identified in a group that meets in southern Palm Beach County.
“Discussions in meetings are certainly less centered on COVID than they were in 2020,” the participant said. A helpful thing for many has been “more intimate access to support in in-person meetings.”
In Boca Raton, city officials said overdose deaths tracked by responders rose from 15 in 2018 to 28 in 2019 and 32 in 2020 before falling to 13 as of Dec. 10, 2021.
Mayor Scott Singer said factors might be greater awareness of the potential hazards and greater proactivity by doctors and health care professionals to limit abuse.
First responders deserve credit, Singer said: “Because of intervention by our fire-rescue teams and police officers, they are able to actually save a number of lives.”
Deputy City Manager George Brown said the city has not changed its policy on how it responds to opioid cases. He speculated that police and fire-rescue might be getting calls sooner and so are able to administer Narcan or get people to the hospital more quickly.

Where deaths happen
Briny Breezes, Manalapan, Gulf Stream and Ocean Ridge do not appear as “injury” locations in overdose records from medical examiners, though they do fall within ZIP codes listed as death locations where no place of injury was identified. That happened in 11 cases in 2020 and 10 during the first nine months of 2021.
This does not mean residents of those towns were necessarily involved. A death location can be different from an injury location because someone was taken to a hospital, for example, officials noted. And sometimes examiners did not know or at least did not record a place of injury.
In another 21 cases in 2020 and nine through nine months of 2021, records listing only a death location showed ZIP codes in or near Delray Beach, Boca Raton and Boynton Beach.
The records include what medical examiners classify as overdoses from all drugs and alcohol and, at least in this case, do not specify the specific substances causing death.
But other sources paint a stark picture of which drugs have been causing the deadliest outcomes.

Florida’s deadliest drug
The death toll from opioids rose a staggering 42% in Florida in 2020, a detailed analysis released in November by the state’s Medical Examiners Commission showed. That was 16.7 deaths a day from opioids as an official cause of death — the “highest total ever,” Palm Beach County State Attorney Dave Aronberg said.
And an average 2.6 of those opioid deaths happened each day in Palm Beach County. That included 1.6 per day in the county dying from the synthetic opioid fentanyl. It was Florida’s deadliest drug, accounting for more than twice as many direct fatalities statewide as any other single contender including cocaine, alcohol or methamphetamines.
Broward (611 deaths) and Palm Beach (572) counties led the state in deaths directly attributed to fentanyl in 2020. Fentanyl was present but not ruled the cause of death in another 62 cases in Palm Beach County.
Many people think of heroin when they hear the word opioids, but records tell an evolving story: Heroin-caused deaths fell by a third in Palm Beach County during 2020 to 138, the lowest total since 2014.
Opioids can come in many forms, including pills such as oxycodone. It is fentanyl, though, that wreaked unprecedented damage.
“Increasingly fentanyl, which is 100 times more powerful than morphine, is added surreptitiously to other illegally manufactured drugs to enhance their potency,” said John Hulick, senior program manager for the substance use disorders community service department of Palm Beach County. “While some drug users may be seeking out fentanyl, many may not have wanted to take it. Many people are dying without knowing what they are ingesting.”
A breakdown by age of the 572 fentanyl deaths in Palm Beach County in 2020 shows relatively few — 67, or less than 12% — involved people 25 years old or younger. Deaths occurred more frequently among people 26 to 34 years old (180), 35 to 50 (208) or older than 50 (117).

‘One death is too many’
Across Palm Beach County, “you’ll note the overdose deaths in 2021 are below 2020 and on par with the number of deaths experienced in 2019,” Hulick said. “My position is, while we prefer to see reductions and may never get to zero, one death is too many. The devastation of such experienced by families, friends and the community is enough to maintain that position.”
Reports late in 2021 showed the struggle is far from over. In October and November combined, overdose response calls tracked by Delray Beach police fell from 55 to 48 but deaths rose to 18, double the number in the same months a year earlier, Ciancio said.
October brought a 21-month peak for Palm Beach County Fire Rescue’s use of Narcan, according to records supplied by Hulick’s office. Reported fatal overdoses countywide reached a 2021 high of 70 in November, a total exceeded by only one month of 2020, though causes had yet to be confirmed by medical examiners in all cases.
Hulick spoke in Delray Beach at a September event that celebrated hard-won gains but also recognized how precarious progress can feel for people and families affected by addiction.
“Our work is not complete,” he said. “I am reminded of that day in and day out.”

Mary Hladky contributed to this story.