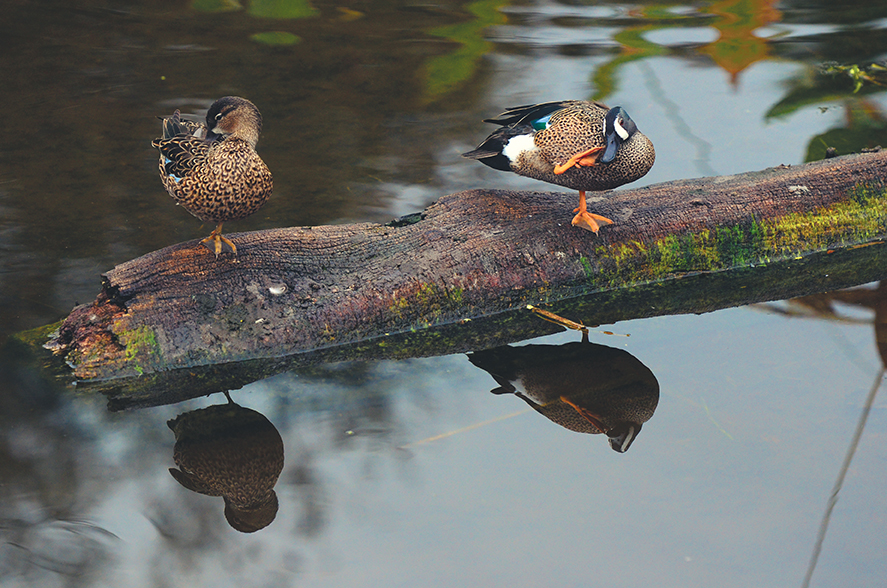 Fewer migratory birds, like these blue-winged teals, have been seen this winter.

Possible causes include a warmer winter to the north and more rain in South Florida.

Migratory birds still flew south this winter — but members of several species may not have made it as far as they usually do.
Others, according to those who track migratory birds, might have just kept going and passed over South Florida altogether.
“Our total number of birds this count was the lowest, at least in several years,” said Chuck Weber, who coordinated the most recent annual Christmas bird count in Palm Beach County for the National Audubon Society.
Warmer weather, more rain here in South Florida this season and an overall change in climate may all account for the decline, biologists and bird enthusiasts say.
“There are many factors involved depending on the species of bird,” says Sandy Komito, a Boynton Beach resident who for many years held the record of seeing 748 species in North America and was portrayed in the movie The Big Year by actor Owen Wilson. “Overall the numbers are down, but the variety is still the same.”
This year, volunteers counted  20,881 birds in Palm Beach County, as opposed to about 24,000 during the previous two Christmas bird counts.
Weber, however, points out that not all species spotted during the count — which took place between Dec. 15 and Jan. 5 — were in decline. In fact, several saw increases.
“The numbers for most species were down this year, but some species were either up, the same or just down slightly from the previous year,” he said.
Smaller birds, including many in the warbler family, were spotted in increased numbers over the previous count.
Yellow-rumped warblers, for example, were spotted 450 times, as compared to the last count when only 120 were seen. But those numbers are down dramatically from the count done two years ago when approximately 600 of the small birds were counted.
On the flip side, the number of American robins in the most recent count soared to 700, up from just two seen during the previous count.
Among those species that saw some of the steepest declines were ducks, including blue-winged teals.
During the Christmas bird count this time, volunteers spotted only 35 blue-winged teals. During the previous count, about 100 were seen.
Higher water levels in South Florida wetland areas — and their impact on the ability of birds to find food — are likely to be responsible for a decline in duck populations as well as in populations of long-legged wading birds in natural wetlands outside of urbanized areas.
“When conditions are good and water levels are low, birds can find food,” says Dale Gawlik, director of the environmental sciences program at Florida Atlantic University and a professor of biological sciences who directs the university’s Avian Ecology Laboratory.
Normally, water levels are higher in the summer during Florida’s rainy season and lower during the winter. That allows fish and other natural food sources for birds to grow during the summer months, when there are fewer birds. When the water levels recede, food sources tend to pool into smaller areas, making it easier for birds, especially long-legged wading birds, to feed.
This year, according to Gawlik, conditions were the opposite of how they should be: with a wetter winter and a drier summer. That meant food production was down and the concentration of fish in pooling areas was reduced.
For dabblers, ducks that feed on underwater vegetation, higher water levels in the winter make it more difficult to reach food and lower levels in the summer make it difficult for food supplies to thrive.
Temperature may also play a role in where migratory birds choose to spend the winter. Warmer weather up north during the early part of this winter may have kept some species from heading this far south.
“It didn’t get as cold up north early in the season so waterfowl didn’t need to move as far as normal,” says Julie Wraithmell, director of wildlife conservation for Florida Audubon.
Wraithmell pointed to a recent study by Audubon scientists that found the median location for the winter range of migrating birds has shifted north over a 30- to 40-year period, which may be attributed to long-term changes in the climate.
Komito agrees with the Audubon assessment that climate change is having an impact and says rising temperatures, rising sea levels and high tides could also affect shorebirds.
FAU’s Gawlik says there is no doubt that birds and other animals are experiencing the effects of climate change, but he says the impact may not necessarily be negative, depending on how well species adapt to the changes.
No matter what the factors, Weber says, he and other longtime birders are concerned by the decline in the number of birds they’re seeing here.
“It just seems that overall, season after season, we’re seeing fewer birds,” he said. “That leads our veteran birders to say ‘What’s going on here?’ ”