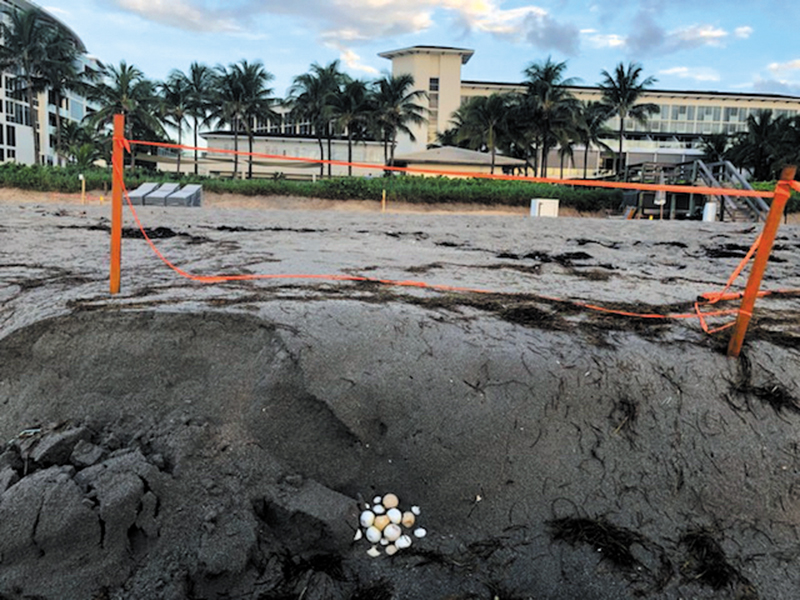 Despite the impacts of Hurricane Dorian and more recent high tides and rough seas, the number of sea turtle nests in south Palm Beach County has already reached record levels.
That’s not to say that nests weren’t lost and turtle eggs weren’t strewn on beaches following the near-miss of Dorian, but the number of nests destroyed was small, experts say, in large part because the rough seas and high tides came late in the nesting season.
“It was not a big issue compared to what it could have been,” said David Anderson, sea turtle conservation coordinator at the Gumbo Limbo Nature Center, which monitors nests in Boca Raton. “By the time Dorian came along, most nests had hatched.”
By Gumbo Limbo’s count, Dorian washed out about 131 of the 446 nests that were on the beach prior to the storm’s impact. Of the nests lost, about 85 were viable with eggs still incubating, while the remaining 46 were believed to be old nests that already hatched.
As was the case with other locations, the majority of nests lost in Boca were mid-beach nests, which are more susceptible to flooding than those farther up the beach and closer to the dune line.
That meant that green sea turtle nests, found closer to the dune or actually in the dune, fared better than loggerhead nests, Anderson said.
In Highland Beach, those who monitor turtle activity say about 15% of the nests on the beach before Dorian were lost. That equates to about 200 nests destroyed.
Overall, Highland Beach monitors recorded about 1,325 nests this season, slightly fewer than Boca’s record 1,375 nests.
“There have been several nests that have successfully hatched since Dorian, and they will continue to hatch into the month of November,” said Barbara James, the marine turtle permit holder for Highland Beach.
Farther up the beach, in Gulf Stream, Briny Breezes and parts of Ocean Ridge, residents and visitors noticed lots of turtle eggs on the beach after Dorian.
Jackie Kingston, president of the nonprofit Sea Turtle Adventures, which monitors turtle activity in that area, estimated that 227 nests remained prior to Dorian and 159 of those were lost.
“It’s still a banner year for us,” Kingston said.
James, Anderson and Kingston say that it is not unusual for storms and high water to affect nests.
“These kinds of events are very normal,” Kingston said. “The turtles have adapted their nesting strategy for events like this.”
The strategy, James said, is to return to the beach and lay eggs several times in a season.
“Individual sea turtles do not restrict their nesting to only one season,” she said. “They may nest between three and seven times — spaced often by 10 to 14 days. This was programmed by Mother Nature to assure that at least several nests will most likely incubate successfully.”
The timing of the storm last month was also good news for least terns, a small migratory bird that nests on beaches.
By the time Dorian arrived, Anderson said, the terns on Boca Raton’s beach had finished nesting and the majority of the birds, currently a threatened species in Florida, were gone.
Anderson said a colony of least terns on Boca Raton’s beach had a record number of nests this year — as many as 40 or 50 — and a record number of chicks.
“This was extremely rare,” he said.