Attorney Bryan Boysaw and Kenya Madison, senior director of Healthier Delray Beach, comfort each other after digging soil from near where Samuel Nelson was lynched in 1926 west of Delray Beach. Photos by Jerry Lower/The Coastal Star

On June 19, 1865, Union Army Gen. Gordon Granger landed in Galveston, Texas, to inform about 250,000 Black men, women and children enslaved in the state that they were free, and had been for more than two years.
Slavery was dead in these recently reunited United States, and Juneteenth was born.
In 2021, Juneteenth became a federal holiday, so a week before this year’s celebration, nine members of the Palm Beach County Community Remembrance Project met beside the C-3 canal west of Delray Beach to remind us that while slavery ended after the Civil War, lynchings did not.
Four shovels poured soil from the canal bank into four gray buckets that Saturday morning, and then the nine men and women, Black and white, held hands in a circle over the buckets and bowed their heads in prayer. On June 11, the participants in the preservation of soil to remember the lynching of Samuel Nelson took time to pray and reflect. BELOW RIGHT: Jars will eventually join those of other victims in a memorial display in Alabama. 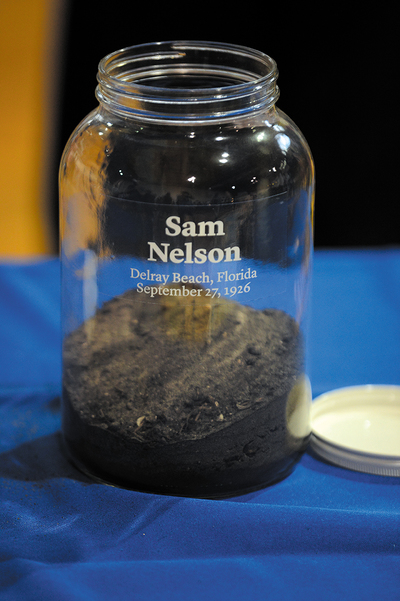 When Delray Beach celebrated Juneteenth the following Saturday, June 18, those buckets of soil would be there in the gym at Pompey Park, their first stop on a long journey of remembrance.
“We scouted the area around the waterway and chose a spot where the soil looked rich,” explains Charlene Farrington, director of the S.D. Spady Cultural Heritage Museum in Delray.
No one will ever know exactly where Samuel Nelson’s body was found on the morning of Sept. 27, 1926, but this canal bank near the southeast corner of West Atlantic Avenue and Sims Road seems most likely.
We don’t how old Samuel Nelson was, if he was a husband or father, or if he had really committed any crime. We don’t even know if Samuel Nelson was his name. But we do know where he was last seen alive.
“In 1923, Delray Beach built a new city hall, fire department and jail at 14 SE Fifth Ave.,” says Mark Schneider, president of the county’s American Civil Liberties Union and a member of the Community Remembrance Project. “But that address no longer exists. The numbers jump from 12 to 20.”
On the afternoon of Sunday, Sept. 26, Nelson was locked in the new jail, accused of attempted criminal assault on a white woman in Miami. The next morning, the jail door was found battered open. Nelson was gone and a short time after, his body, riddled with bullets, was found beside a canal 4 miles west of town.
Three weeks later, on Oct. 17, The Palm Beach Post noted the murder.
“NEGRO IS TAKEN FROM DELRAY JAIL AND LYNCHED
“Samuel Nelson, alias Joseph Johnson, negro, was taken from the jail at Delray and lynched. …”
The brief report had been written by The Associated Press in Miami. The story was on Page 6.
Both the Pensacola Journal and Tampa Tribune published the same AP story that day.
“NEGRO TAKEN FROM JAIL AND LYNCHED BY MOB AT DELRAY,” the Tribune headline read, but the story never mentions a mob, only “unidentified persons.”
The local newspaper took three weeks to report the lynching, but the Delray Beach Town Council needed less than 12 hours to address it.
At its regular meeting that Monday evening, the council discussed appropriating money for the local Chamber of Commerce. It talked about registering real estate brokers. It granted Mr. W.P. Brown a one-week extension on his septic tank.
The lynching of Samuel Nelson was the last item on the agenda.
Police Chief W.M. Croft told the council that he had refused to turn Nelson over to a stranger who claimed to be from Miami, and as far as he knew, Nelson was still in the jail at midnight.
The council then voted unanimously that the Police Department “should be exonerated and be declared free of any blame or neglect in regard to the above mentioned jail delivery.”

There is one further curiosity, though.
On Sept. 18, a little more than a week before Nelson’s death, the historic 1926 hurricane had made landfall as a Category 4 storm just south of Miami, bringing storm surges up to 14 feet in Coconut Grove and tearing the roofs off buildings as far north as Lake Park. Could the stranger Chief Croft claimed to have met really have journeyed from Miami to Delray Beach after that destruction?
All we know of Samuel Nelson’s lynching ends there, but those four buckets of soil collected in his memory have only begun their journey.
Sometime in 2023, the Remembrance Project hopes to see the soil displayed in jars at the Equal Justice Initiative’s Peace & Justice Memorial in Montgomery, Alabama. The jars will be etched with the words “Sam Nelson, Delray Beach, Florida, September 27, 1926.”
They will not be alone.
Founded in 1989 by civil rights attorney Bryan Stevenson, the nonprofit Equal Justice Initiative works to free wrongly convicted prisoners and operates Montgomery’s Legacy Museum and National Memorial for Peace and Justice.
In 2015, the EJI published Lynching In America, now in its third edition, which has documented more than 4,000 lynchings in the Southern states between 1870 and 1950, including 319 in Florida, the most per 100,000 of all the Southern states.

Samuel Nelson is one of two known lynchings in Palm Beach County, and not the first.
On June 7, 1923, Henry Simmons was taken from a rooming house in West Palm Beach and hanged from a tree south of The Breakers hotel in Palm Beach for allegedly being involved in the killing of police officer J.N. Smith, who had stopped three Black men for stealing turtle eggs.
The Remembrance Project is working to confirm the site of Simmons’ hanging before arranging to collect soil there.
In addition to the soil collection, a high school essay contest in the coming school year will satisfy the second of three requirements communities must complete to be represented at the EJI memorial.
The placing of memorial markers at Palm Beach County’s two lynching sites is the third.
Until then, the soil that became a memorial made its first public appearance in the Pompey Park gymnasium on June 18, a centerpiece of the Juneteenth weekend in Delray Beach.
The Boynton Beach Community High School band played and politicians spoke.
“This day will be recorded in our nation’s history and tell the story of who we are as a people,” the Spady Museum’s Farrington told the crowd of about 200 filling the bleachers. “It will make Palm Beach County eligible to receive a monument from the Equal Justice Initiative bearing the names of two men who were lynched here in the 1920s.”
County Commissioners Mack Bernard and Gregg Weiss read a resolution recognizing the importance of both the soil ceremony and the federal Emmett Till Anti-Lynching Act, signed into law March 29.
A video of the soil collection was shown, and Yvette Norwood-Tiger sang a moving, mournful rendition of the Billie Holiday classic Strange Fruit.
“Black bodies swinging in the southern breeze,
“Strange fruit hanging from the poplar trees.”
The four buckets of soil from the place where Samuel Nelson’s body was found almost a century ago waited on a table until finally the men, women and children, young and old, Black and white, came down from the bleachers and formed two long lines.
Each was handed a small mesh drawstring bag containing a plastic envelope and a wooden ice cream spoon.
One by one they dipped a bit of soil from a bucket and put it in the plastic bag. That was theirs to keep. And then they added another spoonful to the glass jars bound for Montgomery.
Nearby, city Commissioner Shirley Johnson watched. 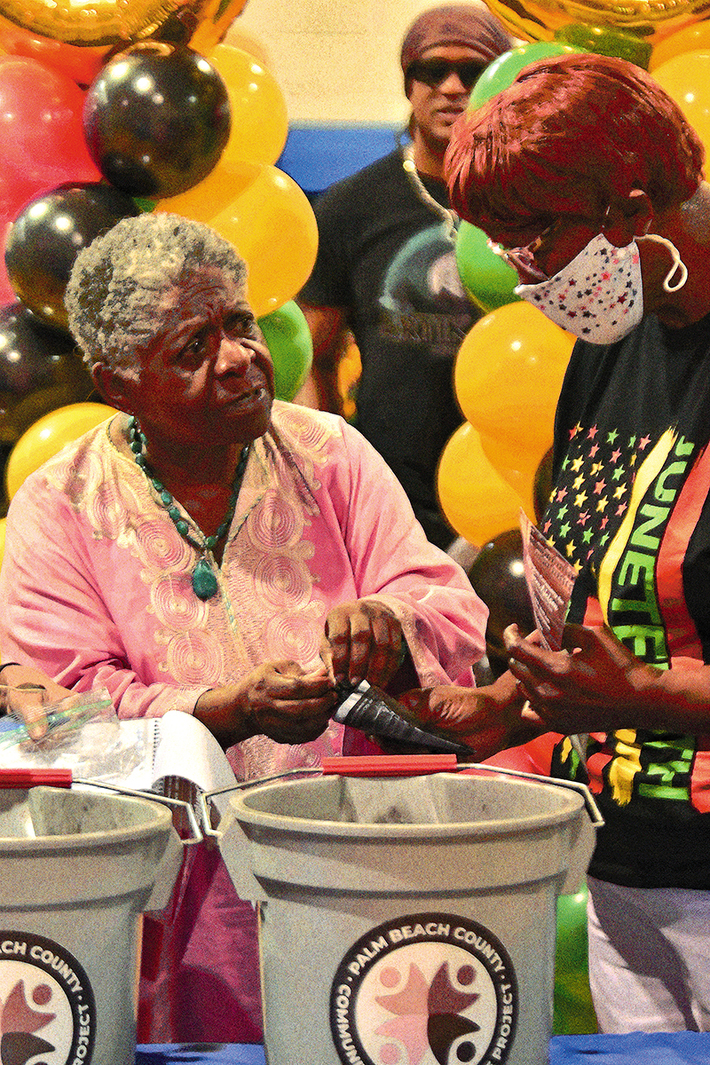 On June 18, the soil was part of a Juneteenth celebration at the Pompey Park gym. Delray Beach Commissioner Shirley Johnson watched as people spooned soil into bags as keepsakes.

“I’m 76 years old and I grew up here in the northwest section, and I never knew about Samuel Nelson,” she said. “Why didn’t I know about this? There was no mention in school. Nobody ever said his name. I didn’t hear about it until 2017 when Bryan Stevenson came to the Spady Museum and he told me, ‘You know, there were two lynchings here.’”
Johnson assembled the little bags of spoons for the ceremony, all 200, so she watched intently as the slowly moving lines made use of them.
“This should be listed as an unsolved murder in our police files,” she said. “I’m going to ask the police if they can reopen this case. Don’t investigate, just keep it open.
“I know we’re never going to know who killed him, but that way Sam Nelson will be remembered.”
She sighed.
“And he was just one of thousands.”

For more information about the Palm Beach County Community Remembrance Project and the Equal Justice Initiative, visit www.pbcremembrance.org and www.eji.org.