Work has stopped on the Estates at Ocean Delray, at 1900 S. Ocean Blvd., with the developer in bankruptcy proceedings and now facing federal charges. Jerry Lower/The Coastal Star 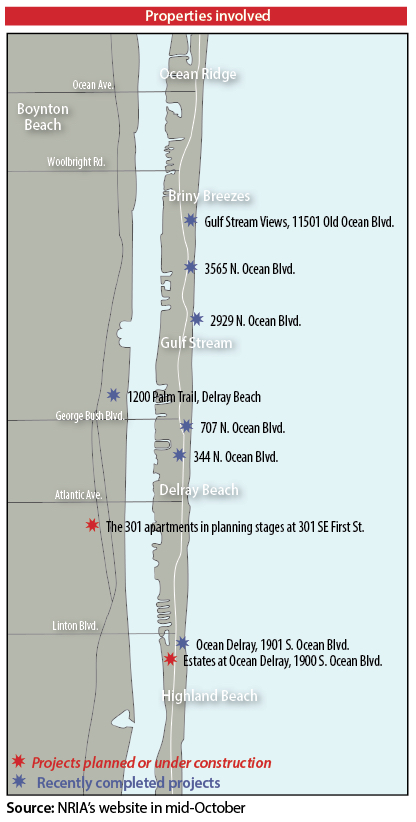 New Jersey developer National Realty Investment Advisors brought sleek modernism to the Old Florida feel of the county pocket next to Briny Breezes with the townhomes of Gulf Stream Views.
It was the developer behind Ocean Delray, luxury condominiums down Ocean Boulevard where one unit at the three-story complex, dubbed the van Gogh, sold for $7.6 million. NRIA was also behind at least four spec mansions along the same stretch of coastal highway.
But now the firm is engulfed in a Chapter 11 bankruptcy and accused by federal regulators of defrauding investors. The company and four of its executives were charged Oct. 13 by the Securities and Exchange Commission with running a $600 million Ponzi-like scheme.
The June 7 filing in U.S. Bankruptcy Court in New Jersey stopped work on its ongoing projects. That includes a months-long stoppage at the Estates at Ocean Delray, 1900 S. Ocean Blvd., five distinct homes across the road from the namesake condominium.
There is also a high-end apartment project in the heart of Delray Beach called “The 301” for which the firm says it is awaiting city approval of its plans. Outside of Palm Beach County, NRIA announced in March it would build a 43-story high-rise project in downtown Fort Lauderdale.
Where the bankruptcy filing leaves projects under construction or in the planning stages remains to be seen.
Generally, these types of bankruptcies involving real estate have a line of contractors, subcontractors, vendors, creditors and investors looking to get paid, said Steven Wallace, a Florida Bar board-certified real estate attorney and partner with Ward Damon, which specializes in bankruptcy and real estate law.
“If the contractor or subcontractors haven’t been paid, they generally stop work,” Wallace said.
On a sunny Friday morning on Oct. 21, there were no work crews at the Estates at Ocean Delray, which remain pretty much concrete shells. A man sitting in a car outside said he represented a new builder taking over the project and that it had been dormant for four months. He would not identify the builder.
U.S. Construction built Ocean Delray and had started the homes.
Palm Beach County records show 27 liens filed by subcontractors against U.S. Construction since late July — although some appear duplicative.
Fort Lauderdale-based Blackfin Building & Development says it is owed more than $192,000 for constructing the shells of the five homes and other work. Doral-based Suntech Plumbing & Mechanical says it is owed about $345,000. Fire protection, equipment rental, roofing and fencing companies have also filed liens.
Philadelphia-based U.S. Construction sued NRIA in March for breach of contract over a stalled project in Philadelphia.
NRIA, based in Secaucus, New Jersey, alleged in an adversarial lawsuit that the construction company participated in fraudulent construction and development contracts. U.S. Construction denied the allegation in a bisnow.com report and the suit — at least in federal court — has been withdrawn.
Dustin Salzano, the son of former NRIA executive Thomas Nicholas Salzano — who is facing a separate criminal charge — is the co-owner and chief financial officer for U.S. Construction, Bisnow.com reported.
Efforts to obtain comment from the attorneys representing NRIA in bankruptcy and the secured creditors committee about the future of ongoing construction of the Estates at Ocean Delray and other projects were not successful. A call was also made to the attorney representing U.S. Construction for comment.

NRIA projects by dozens
NRIA put up capital for projects in South Florida, Brooklyn, Philadelphia and its home state of New Jersey. It owns a total of 31 completed properties, three near completion and 16 that are under construction or in the planning stages, according to the bankruptcy filing.
The value of these properties currently is asserted to be $225 million.
NRIA delineated its projects into fund properties and personal placement properties, according to its website.
Securities regulators say up to 2,000 investors were sold “membership units” for $50,000 each between 2018 and January 2022.
Gulf Stream Views and Ocean Delray fall under what NRIA called “fund properties” on its website. Both are completed. Neighbors in the County Pocket said they see very few residents inhabiting Gulf Stream Views, which opened in July 2021, though NRIA says sales of all 14 townhomes have closed.
State securities regulators in New Jersey alleged NRIA used straw buyers to create nonexistent sales of certain units.
Shortly after The Coastal Star asked questions about NRIA’s properties and ongoing projects, the firm’s website links about investment properties stopped working. Any investor inquiries are now directed to the firm representing the official committee of unsecured creditors. 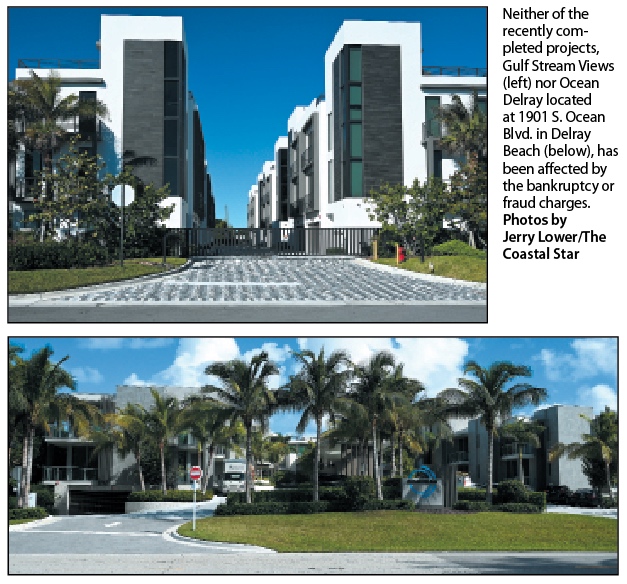 Neighbor worries validated
Marie Chapman, who has lived in the County Pocket for 15 years, says concerns voiced about flooding before Gulf Stream Views was built came to fruition with the construction of the townhomes.
She said the project brought in 16 feet of fill that put the Pocket in a hole where Gulf Stream Views’ irrigation system runs right into homes. Chapman made adjustments to her home so the water comes only in the garage.
Chapman said the news of the bankruptcy and the Ponzi scheme allegations “does bring me and my neighbors some satisfaction, but it would have been better if they were stopped when we raised our concerns with the county.”
At the time of its proposal by NRIA’s luxury home division, NRLiving, residents in Briny Breezes and the County Pocket worried about how Gulf Stream Views’ aesthetic would affect the way of life of one of the last affordable bastions of oceanfront living in Palm Beach County — especially drainage and traffic issues.
Besides the condominium complexes, NRIA has numerous private placement properties where investors’ money is used for new construction or renovation of some prominent properties.
One such property was the 6,117-square-foot home at 3565 N. Ocean Blvd. in Gulf Stream, which sold to the head of a California investment firm in May 2021 for $14.9 million. It was flipped one year later for $27.5 million to James Sausville, a titan in the food preserving industry.
Another spec property was the 7,592-square-foot Gulf Stream home at 2929 N. Ocean Blvd., which was sold to a trust for $15.9 million in May 2021. That property was then flipped this past March for $26.7 million to a trust associated with Elliott Management, an investment firm that recently relocated to West Palm Beach.
Wallace said private companies like NRIA are able to sell stock or membership interest in the limited liability corporations formed for each private placement property.
The parent company created private businesses for each of its properties, and all of its 138 active LLCs filed separately for bankruptcy.
These types of investments had been around a long time, Wallace said, but since Congress passed the JOBS Act in 2012 — short for Jumpstart Our Business Startups — companies like NRIA could start soliciting investors directly through television, radio, social media and billboards.
The company employed a nationwide advertising campaign including radio advertisements and billboards located at the entrances of the Lincoln and Holland tunnels. NRIA also advertised on Fox News.
“It increased the ways folks could raise capital and it led to these types of bad actors,” Wallace said.
NRIA’s past and present properties are squirreled away under LLCs in the bankruptcy filing.
An 11,500-square-foot Delray Beach home at 344 N. Ocean Blvd. sold for $14 million in January. A 7,490-square-foot home at 707 N. Ocean Blvd. in Delray Beach sold for nearly $16 million in March 2021. Two properties at 1200 Palm Trail in Delray Beach sold for $4 million in December 2020.
A map on NRIA’s website shows at least eight other properties, almost exclusively in Delray Beach, that the company apparently flipped.

SEC alleges personal use of investors’ money
The money that fueled all of this construction and renovation came from a classic Ponzi-like scheme where investors were promised up to 20% returns, according to the SEC.
The SEC’s complaint alleges NRIA and its executives used investors’ money to fund personal and luxury purchases for the executives and their families. Investors’ money was also used to pay a reputation management firm to “thwart investors’ due diligence of the executives.”
“In classic Ponzi fashion, these defendants allegedly told investors that they would be paid distributions from profits of their fund when, in reality, payments were being made from the investors’ own funds,” said Thomas P. Smith Jr., associate regional director of enforcement in the SEC’s New York Regional Office.
The four executives named by the SEC are Thomas Salzano, Rey E. Grabato II, Daniel Coley O’Brien, and Arthur S. Scutaro.
The SEC alleges nearly $1.25 million was sent from the NRIA account where fund investments were deposited into Grabato’s business LLC and personal accounts.
Salzano was charged separately in a federal complaint in March with one count of wire fraud and one count of aggravated identity theft. The Justice Department accused Salzano of using a sham loan document with a forged signature in an unsuccessful attempt to obtain a $150,000 investment for a purported real estate venture in New Jersey.
Weeks after the company filed for Chapter 11 reorganization, the New Jersey Bureau of Securities filed a cease and desist order against the company. The company slashed staffing by terminating 60 employees and at the time of the bankruptcy filing was operating with eight employees.
The bankruptcy states that investors held $540 million in membership interests, there was $10 million owed to creditors and trade vendors, and $38 million owed on outstanding mortgages.
“What makes this behavior even more callous is that they allegedly took advantage of 382 retirees who had contributed more than $94 million in savings,” the SEC’s Smith said.
Wallace, the real estate attorney, said in these types of Ponzi schemes that once creditors and contractors get paid, investors find themselves at the back of the line.
“In these Ponzi schemes it’s rare these investors get anything,” he said.