Dozens of reef fish washed up dead on the beach Oct. 3 just south of the Boynton Inlet as the red tide effects continue to be felt along the coast of Palm Beach County. Photos by Jerry Lower/The Coastal Star

By Cheryl Blackerby
Palm Beach County officials took a second round of water samples as the rare red tide continued to occur on beaches in Palm Beach County and fish kills were discovered the morning of Oct. 3 in Boynton Inlet.
Water samples were taken that same day from 13 sites in the county from Martin County to Boca Raton. The results of those tests will be released Friday, Oct. 5 said Michael Stahl, deputy director of Palm Beach County Environmental Resources Management, the agency that took the water samples in partnership with the Loxahatchee River District.
The samples were sent Wednesday night to the Florida Fish and Wildlife Conservation Commission for analysis. Martin and Broward counties are also sending water samples to the FWC.
“Until we get those samples returned to us we don’t really know what is happening with the red tide. Friday we will have a little better idea,” Stahl said Oct.3. “It is really an evolving issue for us. We just learned about the fish kills this morning. So as we continue to monitor the situation we will have a little better understanding whether it is something that is continuing to develop or if this is starting to abate a little bit. This is a rare event on the East Coast.”
Fish including parrot fish, snapper and smaller bait fish have washed up north of Boynton Inlet and at John D. MacArthur Beach State Park.
Anyone who has seen dead fish washing up on beaches should report the location to the FWC Fish Kill Hotline at 800-636-0511.
“At this stage, we’re going to keep the beaches closed, except Gulfstream Park, Ocean Reef Park, Phil Foster Park and  Peanut Island. Those beaches are not getting reports of irritation,” he said. 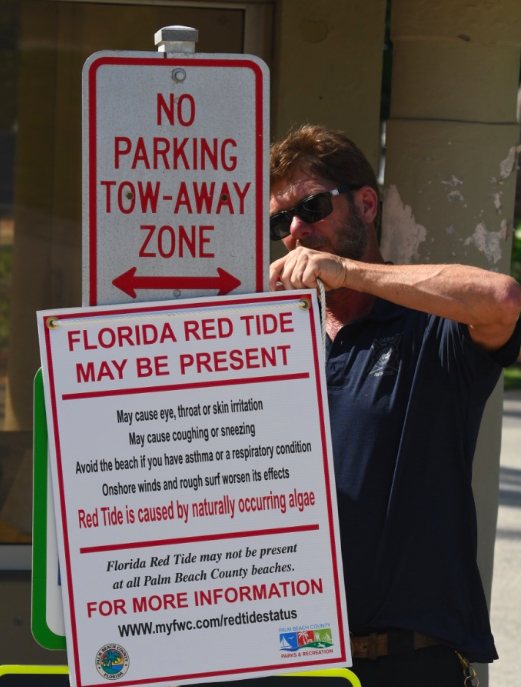 Capt. Robert Wagner who has been with Palm Beach County Ocean Rescue for 26 years, says this is as bad as he has ever experienced on this coast.  He was installing red-tide warning signs on Oct.3.