The dome of Boca’s old town hall, now the historical society’s home, gleams after being regilded for the first time since 1997. Tim Stepien/The Coastal Star

The next time you drive through downtown Boca Raton, take a moment to admire that gold dome gleaming in the sun atop the Boca Raton Historical Society & Museum.

Early last month, a trio of expert artisans from The Gilders’ Studio of Olney, Maryland, spent a week cleaning, scraping and cementing new gold leaf to the cupola’s dome.

Addison Mizner (1872-1933), the legendary architect and developer who gave us the Boca Raton Club, the Everglades Club in Palm Beach, and numerous Mediterranean-style homes during the Florida land boom of the 1920s, had nothing to do with that dome.

“Addison Mizner didn’t invent Boca Raton,” says Susan Gillis, the society’s curator of collections, “but he put it on the map.

“Mizner was hired as the city planner, and he designed two versions of the town hall, which he called the city hall, in 1925 and ’26,” Gillis explains. “The first was two stories tall and considered too expensive. His second version was only one story and they started laying the foundation, but then that was also deemed too expensive.”

The land boom was going bust. Property taxes were not forthcoming, and in September 1926 the Mizner Development Corp. went bankrupt.

Enter Delray Beach architect William Alsmeyer (1890-1976), who designed the building that stands today, a mission-style structure with a bell tower on its north end — the bell disappeared years ago — and the domed cupola.

Searching old files, Gillis has found a yellowed invoice. On Feb. 9, 1927, the Town Commission approved a payment of $877 to Alsmeyer for his design work. How the dome went gold is more mysterious, and it didn’t until the 1980s.

Alsmeyer’s original drawings called for the dome to consist of metal sheathing coated in stucco.

“Apparently the stucco was never applied,” Gillis infers, “because 1927 photos show only the metal sheathing. The sheathing was painted silver as shown in a postcard from the 1950s.”

When the restoration of the town hall began in 1983, after the historical society took over the lease, the Boca Raton Rotary Club donated $25,000 to have copper sheeting added and the dome gilded. The gold leaf alone cost $5,000.

“Absolutely. Gold was cheap back then,” says Michael Kramer, who would know. 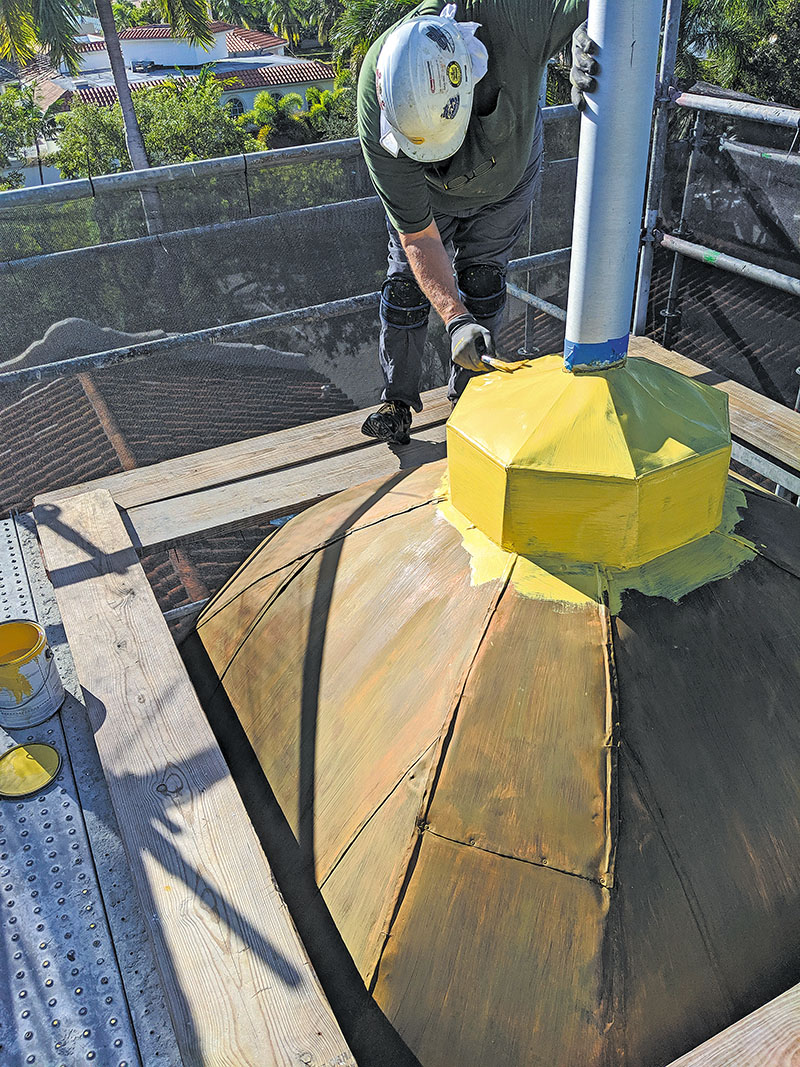 A worker preps the copper dome to receive adhesive. 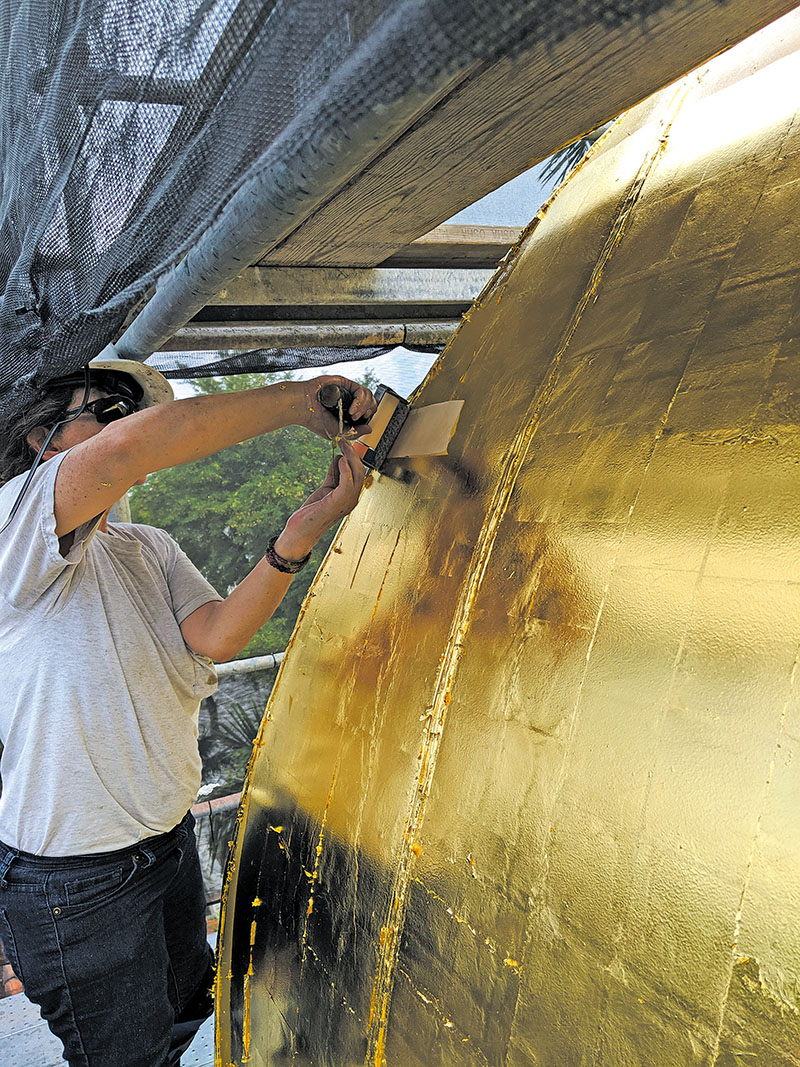 About 1,800 sheets of gold leaf cover the dome. 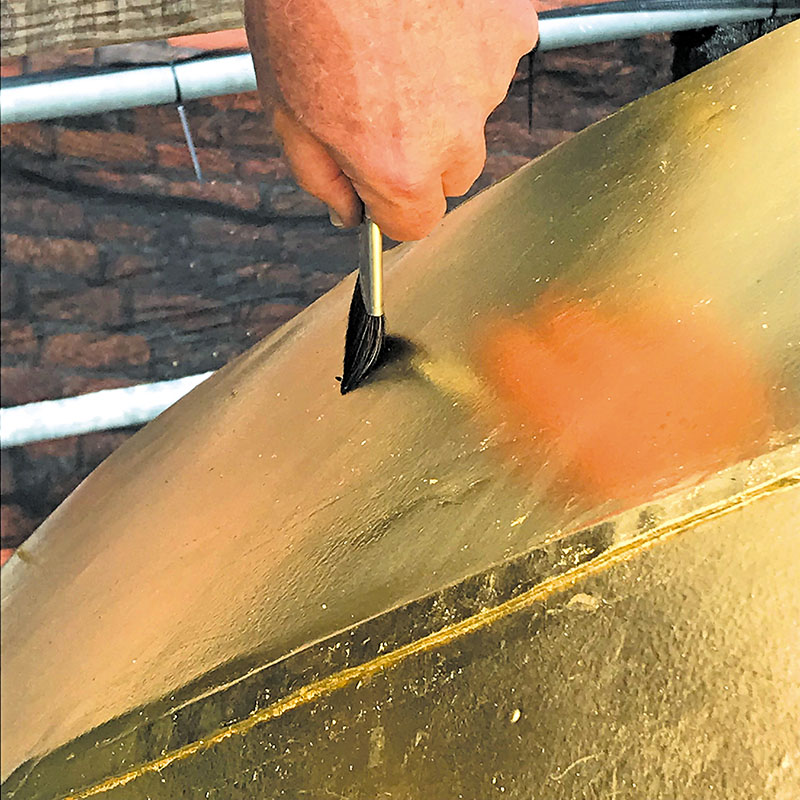 A squirrel hair brush smooths out the leaf as work on the regilded dome wraps up last month. Photos provided by The Gilders’ Studio

Kramer is the founder and president of The Gilders’ Studio, which regilded the dome in 1997, to mark the society’s 25th anniversary, and again last month.

“The most important thing is the preparation,” Kramer begins. “If it’s not done properly, the gold leaf and primer peel off.”

First the three-person team stripped the flaking gold leaf and adhesive, down to the copper finish.

“The copper was in excellent shape,” Kramer reports. “No tears, no holes. No bullets. When we did the Florida State Capitol building 20 years ago, there were several bullet holes. We dug out a bullet there.”

Then came two coats of a yellow metal primer.

On Friday afternoon, Oct. 4, they applied a slow-drying adhesive.

“The next day it’s just barely tacky, and you have the whole day to work on it, but we got real worried about the weather on Saturday,” he says.

Rather than spend three days applying the gold leaf, the gilders arrived at dawn that Sunday morning, worked until 5 p.m., then finished early Monday morning.

In the end, they had covered the entire dome with 4-inch sheets of gold leaf, then smoothed it all down with squirrel hair brushes to erase any wrinkles or overlaps. “You figure it takes roughly nine 4-inch sheets to cover a square foot, and the dome was about 200 square feet, so we used about 1,800 sheets,” Kramer says.

Those gold leaves were made especially for the dome by Manetti Goldbeaters of Florence, Italy. Silver paint covered the copper dome in a postcard view of Boca Raton’s town hall from 1956. The dome has been gold since the 1980s. Photo provided by Boca Raton Historical Society

In 1997, the city paid $20,000 for the job. This time, the price was $40,000, according to Mary Csar, the society’s executive director.
The new gilding is part of the society’s History Alive! campaign, which hopes to raise $1.5 million to install six permanent history exhibits and pay for some interior improvements.

The city is contributing $650,000 to help pay for enclosing the back patio and adding impact doors, Csar said.

In general, the city will pay for regular maintenance, such as the new gilding, while the society’s fundraiser will pay for the new exhibits, Csar said.

She declined to reveal how much of the $1.5 million has been raised. “We’re underway,” she said. 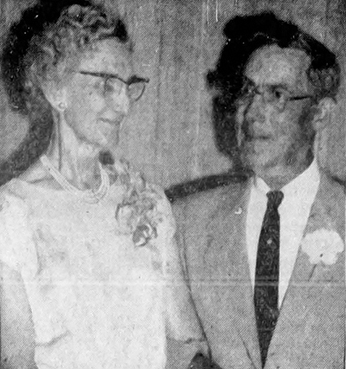 Meanwhile, William Alsmeyer remains little known, while Addison Mizner remains an architectural legend. And one of the perks of being a legend is getting praise for buildings you didn’t design.

On April 15, 1982, when it was announced the historical society would move into the old town hall, a headline in The Boca Raton News announced, “Mizner design graces building to be a museum.”

And two years later, on Nov. 15, 1984, when the renovated building was dedicated, The Palm Beach Post praised “the stately town hall designed by Addison Mizner.”

That prompted an angry letter to the society from the late architect’s son.

The family had donated his father’s original drawings to the society, Ralph Alsmeyer noted, and yet nowhere in the paper’s report was his father’s name mentioned.

His father had lived in the area for 20 years, he wrote, “proud of his accomplishments in the area during the 1920s — never a millionaire, but solvent, which is more than you can say of Addison Mizner and his grand, elaborate, extravagant ways!”

And what of the original wall plaque that named his father the architect, Ralph Alsmeyer wondered. Had it been hidden or destroyed?

Peggy McCall, the archivist at the time, replied promptly to assure Mr. Alsmeyer that his father’s contributions were remembered and honored. The society was not responsible for the incorrect headline, she noted.

Yes, his name is still there on the lobby wall, 92 years after his work was done.

And now the dome shines anew, atop that lovely old building he designed. Good as gold.