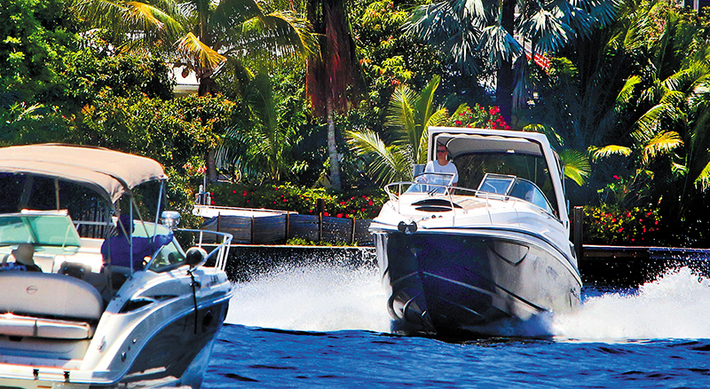 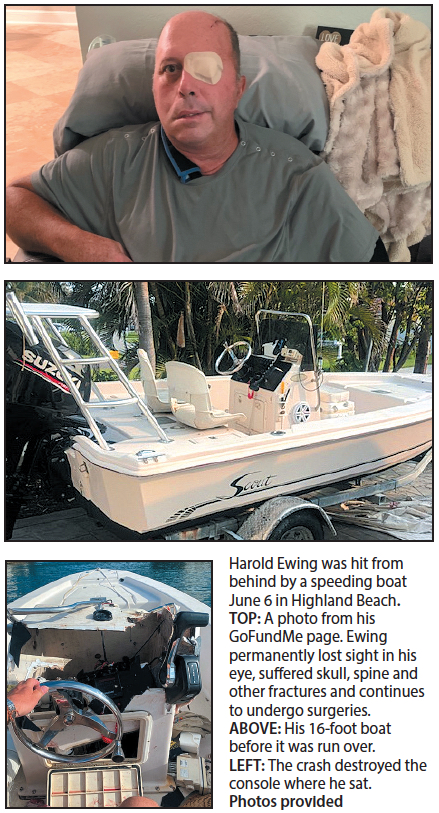 It was a perfect Florida June day when Harold “JR” Ewing, his wife and daughter boarded their 16-foot boat and headed north on the Intracoastal Waterway from Boca Raton to Delray Beach for lunch with friends.
Ewing’s boat slowed in the water off Highland Beach as a larger southbound boat created a sizable wake. Not all the boats in the area cut their speeds, however. Instead, the operator of a 29-foot Century apparently didn’t see Ewing’s boat in front of him and plowed into it, crushing the smaller vessel.
Ewing, who was behind the console, was struck by the Century’s bow and suffered numerous serious injuries, including the loss of sight in his left eye, paralysis on his right side, more than 28 skull fractures, spine fractures, a broken shoulder and three broken ribs.
“What upsets me is that I was blindsided,” he said. “He went up and over us. There was nothing I could do.”
Ewing, 48, and his wife, MaryJane, hope that renewed efforts by elected officials in Delray Beach and Highland Beach will persuade state lawmakers to implement regulations — including enforcing speed limits on the Intracoastal Waterway — to enhance safety.
“It’s sad what happened to me, but it shouldn’t happen to anyone else,” Ewing said.
Less than three months after Ewing’s June 6 accident, police, fire rescue personnel and officers from the Florida Fish and Wildlife Conservation Commission were back near the water off of Highland Beach, this time responding to a crash in which seven people were thrown from a boat after it crashed into a sea wall. A 37-year-old woman died from her injuries.
While that accident is still under investigation, a citation was filed in the crash involving Ewing. The operator of the Century was cited for violation of navigational rules that results in an accident causing serious bodily injury, according to an FWC report. The violation is a second-degree misdemeanor punishable by 60 days in jail or a $500 fine.
With both those accidents in mind, Highland Beach commissioners last month considered a resolution asking the FWC to “actively enforce existing designated boating speeds and all boating safety measures along that part of the Intracoastal Waterway that abuts the town of Highland Beach.”
Highland Beach’s proposed resolution, currently being revised, comes after Delray Beach commissioners twice passed a similar resolution. Delray Beach approved a resolution in February 2020 and a similar one in June, both asking the FWC to lower the boat speeds to a slow-speed/no-wake zone in a section of the Intracoastal.
Highland Beach’s proposal, however, is focused on increasing enforcement rather than on reducing speed.
Both communities, however, are focused on making the Intracoastal safer.
In Delray Beach, commissioners in September agreed to spend $65,000 on a 23-foot boat, with the money coming from the city garage fund that police and fire departments pay into annually. The boat will be purchased in October, then four officers will be trained to operate it before it is deployed.
Highland Beach commissioners also agreed to investigate the possibility of purchasing a boat, something residents say is much needed.
The boat in Delray Beach will allow marine patrol officers to enforce the laws, respond to emergencies and patrol the 3-plus miles of the Intracoastal, the beachfront, Lake Ida and 15-plus miles of canals, according to the supporting material.
Delray Beach Police Chief Javaro Sims plans to strike deals with nearby police departments in Boca Raton and Boynton Beach with their own marine units. The agreements would allow the marine units to pursue speeding boats into neighboring cities.
Delray Beach barrier island resident Pam Daley said the police boat was “a marvelous step forward to having a no-wake zone in the section of the Intracoastal. ... We will welcome it whenever it comes.”
The police boat also will help residents who live on the other side of the Intracoastal and are affected by wakes from speeding boaters on the waterway.
Patrick Potak, who has owned Marina Delray Inc., at the western base of the George Bush Boulevard bridge for 26 years, said wakes at times have damaged his docks and boats tied up there. He called the city’s plan to have its own marine patrol boat “good news for the residents and my marina.”
All along the waterway, wakes continue to be a concern for residents and are an issue for Ewing and his wife as they try to deal with challenges that come from the June accident.
“During the weekends it should all be no-wake zones from the Hillsboro Inlet to Boynton Beach,” Ewing said.
After undergoing his sixth surgery in September, Ewing said he is fortunate that the incident happened behind the town’s fire station where he could get a quick response. He’s grateful that his family members were not injured.
His wife and 14-year-old daughter were in the bow of the boat. The girl’s twin brother, who probably would have been at the console, decided at the last minute not to make the trip.
“For all the things that went wrong, there were a few things that went right,” said Ewing, who lives in Boca Raton and owns a construction services business. He can operate his business from the office but is no longer able to work in the field. “I’m in a bad way but I’m alive and here.”
The Ewings also are grateful for the support they have received from the community, including the more than 200 people who have contributed to a GoFundMe account that has raised more than $50,000.
That can be found at www.gofundme.com/f/harolds-adventure-partner.