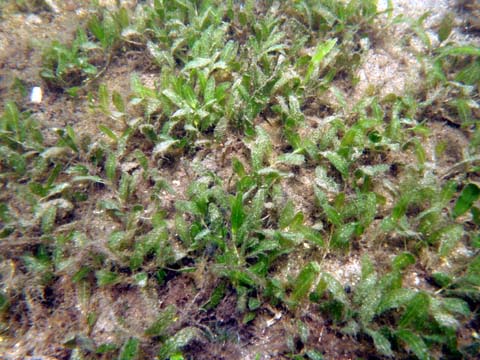 By Jane Smith
At the Snook Islands Natural Area — the one touted as an example of what can go right when various agencies and volunteers work together — most of the Johnson’s seagrass is dead.
The county’s Department of Environmental Resources Management also found many of the oysters that once filtered the water in the central part of the Lake Worth Lagoon choked with muck.
Most of the young mangroves carefully planted by volunteers on Ibis Isle in Palm Beach are dying.
The cause? Stormwater runoff from the western areas of the county, including freshwater releases from Lake Okeechobee, and eastern county lawns sending nutrient-laden water into the central part of the lagoon, according to DERM.
The freshwater flows through the C-51 Canal and empties into the lagoon on the border between West Palm Beach and Lake Worth. That canal water changes the brackish quality of the central lagoon, coating its sandy floor with muck and allowing a wood-boring isopod to thrive. The isopod attacks the young mangroves.
The freshwater releases rival what has been dumped into the St. Lucie River, said Ed Tichenor, director of Palm Beach County Reef Rescue. “The only thing we haven’t seen is the toxic algae,” he said.
One of the county’s environmental analysts noted the lack of seagrass when he went out to monitor the Snook Islands habitat.
“In August, I couldn’t even find a blade of grass out there,” said David Carson, the environmental analyst.
But Paul Davis, division director at the county department, is more measured. He counters that a recent study found 5 percent of the Johnson’s seagrass still surviving on the Snook Islands. He also defends the $26.2 million spent restoring the Lake Worth Lagoon as worth it, despite the recent problems.
The money came from county, state and federal sources.
“There still will be these episodes of runoff, but with components in place, the lagoon can come back,” he said.
In August 2012, Tropical Storm Isaac dumped as much as 18 inches onto the western areas of the county, creating another sustained high-volume discharge into the lagoon. With little time to recover, the seagrass is at its lowest coverage since monitoring began in 2000.
The Johnson’s seagrass was the first marine plant to be listed under the federal Endangered Species Act. It is a food source for manatees and sea turtles — the “coastal canary” that indicates the health of the lagoon.
What will happen this winter when the manatees return and are hungry? Tichenor wonders.
The mangroves provide habitat for young goliath grouper that are spawned off the shores of Boynton Beach, he said. Every August, when goliath grouper spawn around the MV Castor wreck, the Boynton Beach area becomes a tourist attraction for scuba divers, Tichenor said. The grouper can weigh up to 800 pounds. Harvesting goliath grouper is banned by state and federal regulations.
“We are trying to solve the problem at its source,” Davis said, “by redesigning the plumbing of South Florida.”
His department is working with the South Florida Water Management District, state agencies and municipalities to do this.
“We need to find a better way of getting water off the land, finding locations to store it or treat stormwater runoff,” he said. “We need to realize we are in this together, what we all do on our lawns (affects the stormwater runoff).”
In October 2012, the county passed a fertilizer ordinance regulating its use in the areas outside of cities and towns. Most municipalities, Davis said, have adopted similar ordinances to protect the county’s ground and surface waters. Banned activities include: Fertilizing when there is a flood warning in effect or blowing the fertilizer and grass clippings into the street where they will be washed into the stormwater system.
Another problem comes from septic tanks. The towns of Ocean Ridge and Manalapan don’t have a centralized sewer system, he said. “It’s the cost of fix vs. other projects,” he said.
The amount of seagrass should be known by March. Divers are mapping the seagrass in 1,000 different locations in the lagoon with a goal of the field work finished by the end of October, Davis said. Then it will take a few months to turn that data into maps.
The county department used to rely on aerial surveys for mapping. After Tropical Storm Isaac came through and the runoff increased, Davis said they couldn’t tell from the photos where the seagrass was.
This fall, the Florida Fish and Wildlife Conservation Commission will survey the oyster beds in the central part of the lagoon.
“They need to stop the releases,” Tichenor said, “but there is no way to stop it.”
For now, there is the Lake Worth Lagoon Management Plan available at lwli.org.