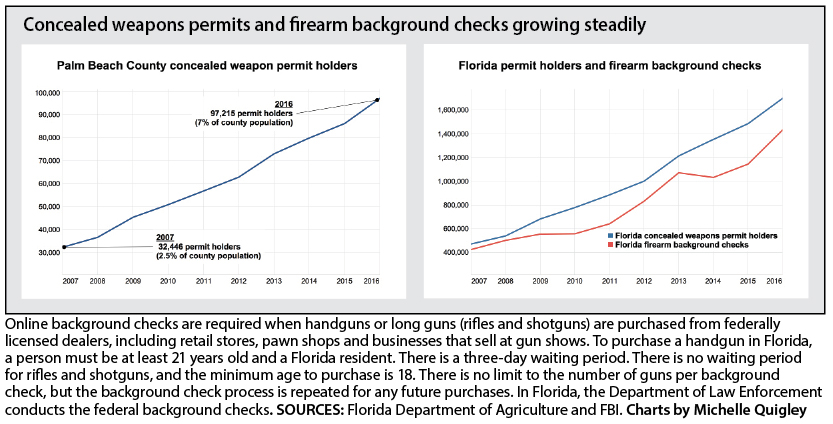 By Rich Pollack and Michelle Quigley

It was just a few months ago, following high-profile mass shootings across the country and deadly confrontations in which civilians or law enforcement officers were shot, that police officers in Ocean Ridge began noticing something they hadn’t seen before.
“We encountered more people who were carrying a weapon following those events,” Police Chief Hal Hutchins said. “It wasn’t any one thing. It was a culmination of several things.”
Hutchins says the number of times his officers encounter individuals with firearms, either in their cars or on their person, seems to be winding down as fewer national incidents that might instill insecurity are reported.
His observations, however, raise questions about whether more people in Palm Beach County are in possession of firearms than just a few years ago and, if so, what impact that increase might have, both positive and negative.
The bottom line is that there’s really no way of knowing for certain if there are more people with weapons in our communities. That’s largely because Florida does not require gun owners to register their weapons. In fact, state lawmakers — influenced by a strong gun lobby —  have made it clear they want to keep it that way.
Here’s the way the current law reads: “No state governmental agency or local government, special district, or other political subdivision or official … shall knowingly and willfully keep or cause to be kept any list, record, or registry of privately owned firearms or any list, record, or registry of the owners of those firearms.”
To get an idea if there is a growing number of gun owners in Florida, and specifically in Palm Beach County, however, The Coastal Star looked at the number of concealed weapons permits issued to those with Palm Beach County addresses and those living in Florida. In addition, the newspaper looked at the number of background checks done by the Florida Department of Law Enforcement on those purchasing firearms in Florida.
There are challenges to drawing a conclusion that there are more guns in the county or the state based on those statistics alone because there are many gun owners who do not have permits, nor do they need them.
Florida does not require you to have a permit in order to legally have a gun in your home. You can also have a gun in your car without a permit as long as the firearm is safely secured and not readily available for immediate use.
The data collected through public records, however, show a dramatic increase in the number of background checks done in Florida in the last 10 years as well as a significant increase in the number of concealed weapons permits being issued in Palm Beach County in the same time period. Everyone who purchases a new gun must submit to a background check, even people with concealed weapons permits. Those permit holders are each allowed to carry firearms in a concealed manner, either on them or in close proximity to them.
In 2007 there were 32,446 concealed weapons permit holders in Palm Beach County, representing 2.5 percent of the county population. By 2016, according to statistics compiled by the Florida Department of Agriculture, which issues the permits, that number had nearly tripled to 97,215, representing about 7 percent of the population. The number of concealed weapons permits represents the total number of people who have licenses at a given point in a year.
Statewide the number of permit holders increased from 472,936 in 2007 to more than 1.7 million in 2016. It is estimated that close to 8.5 percent of Florida residents now have concealed weapons permits.
Also tripling during that same period was the number of Florida firearm background checks administered under the Florida Firearm Purchase Program and conducted by the FDLE. In 2007 there were 426,180 background checks conducted but by 2016, that number had ballooned to 1.4 million.
Background checks are used to ensure that each customer purchasing a weapon does not have a criminal record, hasn’t been legally judged as mentally incompetent, hasn’t been dishonorably discharged from the military, or isn’t otherwise ineligible to make a purchase.
Although these numbers cannot be construed as a definitive count, both the increasing number of concealed weapons permits issued and the growing number of background checks conducted appear to indicate two things: More Floridians are buying guns and more are carrying concealed weapons.

Owners must take precautions
Most people in law enforcement or who study the gun issue believe there are pros and cons to having an increasing percentage of the population with concealed weapons permits.
“It’s a double-edged sword,” says Marc Woods, a former Delray Beach police officer with 30 years’ experience who now works for the city’s code enforcement division. “Having armed responsible citizens is not a bad thing.”
Where problems arise, Woods believes, is when gun owners do not follow precautions designed to keep themselves and others around them safe.
“If you’re not a responsible gun owner, there could be problems,” he said.
Hutchins agrees.
“If you are carrying a firearm for lawful purposes, that’s not a bad thing,” he said. “If you want to be a firearms owner, however, you have to accept the responsibility that comes with it.”
Thomas Gabor, a former professor of criminology at the University of Ottawa and author of a recently published book, Confronting Gun Violence in America, says recent national surveys show that while the majority of people don't feel safer with more guns in their community, there are some who do.
“If it makes them feel more safe, then I guess that’s an upside,” he said.
One problem with having more guns in a community, however, is the increased possibility of those guns falling into the wrong hands.
A study conducted by the University of Pittsburgh and released in late 2016 found that almost 80 percent of perpetrators of a crime were carrying a gun owned by someone else.
The study also discovered that more than 30 percent of the guns recovered at crime scenes by police in Pittsburgh had been stolen and 4 in 10 of those guns weren’t reported stolen until after police contacted the owner.
In other words, many owners weren’t initially reporting that the weapons had been taken or were unaware that they were missing. It should be noted that unlike Florida, Pennsylvania does require a person to have a permit to carry a gun in a vehicle, which would make a person who had a gun stolen from a car but didn’t have a permit reluctant to report the theft.
There are 10 states plus the District of Columbia that require gun owners to report when a weapon is lost or stolen but that is not the case in Florida or Pennsylvania.
“If a gun is initially stolen, there’s a better than even chance it’s going to be used in a crime,“ says Gabor, who now makes his home in South Florida.  “From the time of that theft, the gun is in the hands of someone who has already committed a crime.”

Guns stolen from cars
In Palm Beach County, where there have been several rashes of car burglaries affecting just about every community, law enforcement officials say leaving a firearm unsecured in your car could lead to the weapon’s being used for illegal purposes.
“The chance it will be used in another crime is fairly high,” Hutchins says.
Some of the weapons taken from cars, according to Lt. Scott Privitera of the Delray Beach Police Department’s investigative division, are kept by the thieves. Others end up being sold on the black market.
“If they chose to sell them, they’re as good as cash,” he said, adding that prices can vary depending on how eager the seller is for money.
Just last month, Delray Beach police discovered that 38 vehicles in an area from Federal Highway east to State Road A1A were broken into on the same night.
In 2016, Delray Beach police reported 20 guns taken during auto burglaries, up from 15 the previous year. In all but four of those cases, the vehicles involved were unlocked.
So far this year, Privitera said, the department has recorded five or six more thefts of guns from unlocked vehicles — none of which occurred during the one-night crime spree in February.
Those numbers could be even higher, Privitera says, since police know that crimes in general — including burglaries to vehicles — are often underreported.
Larry Rosensweig, former president of the Seagate Neighborhood Association where some of the most recent car break-ins occurred, was surprised to hear that so many gun were left in unlocked cars.
“That’s shocking,” he said. “It’s hard to believe that people are so careless that they leave a gun in a car that’s not locked or secured in a garage.”
According to the Palm Beach County Sheriff’s Office, which polices the unincorporated portions of the county, there were 199 firearms reported stolen from vehicles in 2015. That number rose to 311 in 2016.
In Boynton Beach, the number of guns reported stolen from vehicles dropped in 2016, with 35 reported last year and 39 reported in 2015.
“If you want to own guns, you have to be responsible and not leave them unsecured in your car,” says Woods.
Gabor, the criminologist, believes there is also a correlation between gun ownership and shootings by police and of police officers. With more weapons available — legally and illegally —  there’s a greater likelihood that criminals will be armed. In some cases, he says, officers may be quicker to make a decision because they fear the person they’re dealing with could have a weapon.
Hutchins says that because of national incidents where officers came under attack and because of a perceived increase in the number of weapons in the community, officers have to be more observant and guard against complacency when making traffic stops, investigating alarm calls or handling any other routine incidents they encounter on a daily basis.
“We have to be hyper-vigilant,” he said.

Vehicles are never a good place to store firearms
If you must store a firearm in your vehicle, here are safety tips from Ocean Ridge Police Chief Hal Hutchins:
• Avoid leaving a weapon in your vehicle overnight or whenever the vehicle is unattended.
• Make sure your car is locked and your firearm is out of plain sight if you need to leave it in your vehicle.
• If you must keep a weapon in the car, make sure it is secured in a gun safe that is mounted to the vehicle.
• Avoid storing your weapon in a glove box. Even locked glove boxes are not truly secure.
• If you must carry a firearm in a vehicle, always ensure that it is not accessible to children at any time.
The best place to store a weapon in your home is in a locked gun storage area.