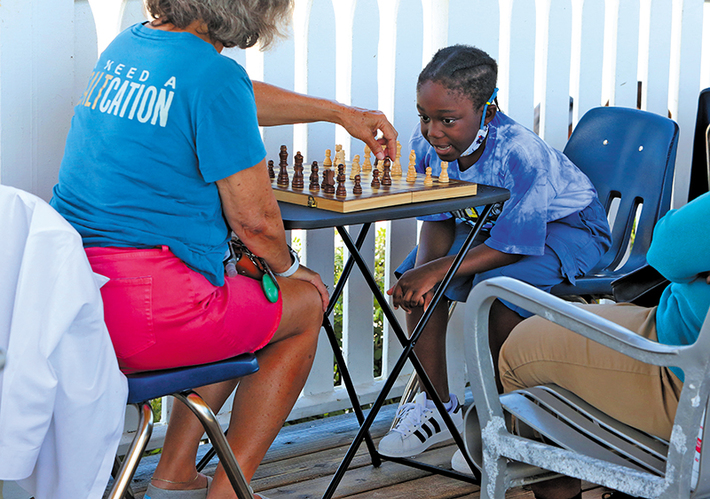 Tristen Willis, 10, studies the board as he competes with Deb Peters at the Delray Beach Pavilion. It’s part of James McCray’s effort to teach chess, mainly to young players. Photos by Tim Stepien/The Coastal Star

By 9 a.m. on a recent Saturday, well before the parking lots filled and beachgoers crowded State Road A1A and Atlantic Avenue, James McCray and Samuel Spear Jr. were busy preparing the Delray Beach Pavilion. They arranged a basket of bananas, apples and mandarin oranges. Filled a bucket with bottles of iced tea and purified water. Displayed the T-shirts neatly.
Then they positioned seven small folding tables and chairs along the Pavilion’s rail and placed a chessboard and hand sanitizer on each.
Finally, McCray hung the banner. “Community That Plays Together Stays Together/James Chess Club, Est. 2020.”
“The appeal of chess is love,” he said. “When you learn to love a game, you learn to love yourself.”
Since June 2020, James McCray has taught twice-weekly chess games for boys and girls at the Spady Cultural Heritage Museum on Northwest Fifth Avenue. The children think they’re learning how to play a game.
McCray, 72, believes they’re learning how to live a life. “In both chess and life, the only opportunity for growth comes from experience,” he reasons. “With experience, you get better at both chess and life.”
On Dec. 29, McCray arranged to set up at the Pavilion, his first effort at spreading his love of chess, and life, to the larger community. This Feb. 19 event was his second downtown gathering. 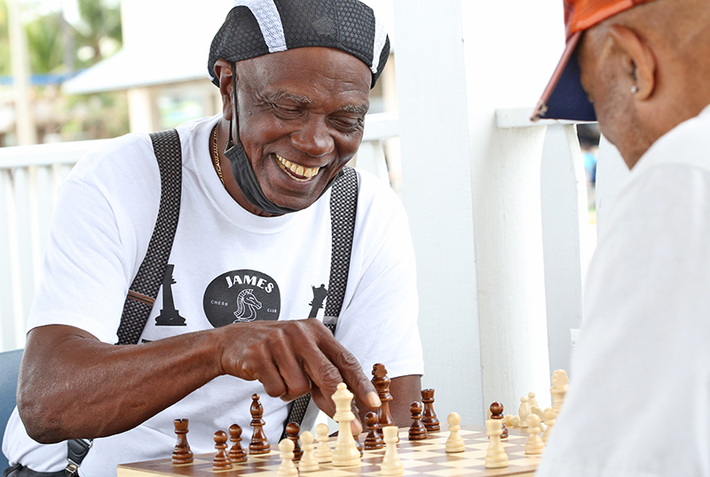 Chess vs. life decisions
Tables set, refreshments ready, McCray and Spear waited for players to appear.
“It’s all in the hand of God,” McCray said.
And they waited some more. James McCray’s fledgling effort to make chess a public pastime in Delray Beach has noble predecessors.
In 2017, a chess enthusiast in the Netherlands named Jesus Medina Molina set up three chess sets in a public park in the city of Utrecht, and “The Urban Chess Project” was born. To date, more than 40 cities throughout the Netherlands have followed Utrecht’s example and placed games in their public parks. New York City’s Washington Square Park is famous for its outdoor chess tables, where fabled master Bobby Fischer once played, and Chicago offers chess tables in four of its public parks.
The most famous outdoor chess game dates to 1454 in the northern Italian city of Marostica. Sept. 12, 1454, to be exact. According to the story, two noblemen fell in love with Lionora, a daughter of the local lord, Taddeo Parisio, and challenged each other to a duel for her hand.
However, Parisio was a peaceful man, so he decreed that they would play a game of chess rather than risking bloodshed, with the winner winning Lionora and the loser her younger sister, Oldrada. The moves of that game, and the winner, are lost to history, but on Sept. 12 in even-numbered years, thousands gather in Marostica’s town square to watch human chess pieces re-create that legendary game on a chessboard 58 feet long on each side.
McCray is happy if he can keep his Pavilion tables busy with his students and passersby enjoying a game he’s played for 50 years.
“Same old story,” he says. “We had neighborhood games, and chess was different from basketball and baseball. I went for chess because I don’t like to be hit.”
Eddie Rodgers, 69, a West Palm Beach native, has been playing chess with McCray for 40 years.
“James uses chess for his life decisions,” says Rodgers, whose father taught him the game. “To me, it’s a game first, but I realize its importance in making life decisions. Some pieces are more or less important in your life, just as some decisions you make are more or less important.” Samuel Spear Jr. is a relative newcomer, having played only 11 years.
“It brings people together,” he says, “and you can pause a minute. You can just sit there and study the board. It’s not like some games, where you have to go crazy.”

‘It’s a mindset game’
Shortly after 10 a.m., Mary McKinzy of Riviera Beach arrived with her grandchildren, Tristen Willis, 9, and Taya Willis, 6.
Tristen, a third-grader at Trinity Christian School, is the chess player. Taya nibbled an apple.
“I play golf, too,” he announced. “I like both. With golf, I get to play with people, and when I get bored I can play chess alone.”
This Saturday morning, he played chess with Deb Peters, a retired elementary school teacher from Long Island who taught computer chess to 500 kids. Chin in hand, he studied the board. He frowned. He moved. She frowned. She moved. They moved.
Does he smell victory?
“I sure do,” he said, and his sense of smell proved true. They shook hands. Peters was gracious in defeat.
“Did you let him win?” a cynical spectator asked.
“Absolutely not!” she exclaimed.
“It’s fun to win,” Tristen said in a postgame interview, “but even if I lose I’m happy because I got to play. And even if you lost, you can always win the next one.”
This is one of the life lessons McCray wants to impart.
“I try to teach the little ones you don’t have to always be successful to be happy,” he says. “And you will lose sometimes. But make sure you don’t give up.”
Now Thomas Norris arrived with his son, Ethan, 9, a third-grader at Boca Raton Elementary School.
“James taught me to play,” Ethan said. “It’s a mindset game, not like video games like Fortnite and Call of Duty. I play those games, but not as much. I get bored. I never get bored with chess.”
What he’s learned, Ethan said, is that chess has three kinds of moves: dumb moves, great moves and reasonable moves.
“Never make a dumb move or a bad move,” he said. “Don’t give your pieces away, and don’t rush. Take your time.”
Patience is another life lesson McCray teaches through chess.
“Be patient and appreciate every moment,” he tells young players, “both in life and in chess. And either way, you’re going to lose someday.”
Ethan played until his father returned with a burger and fries to interrupt the game. Ethan ate the burger and fries, then fell asleep on a bench. 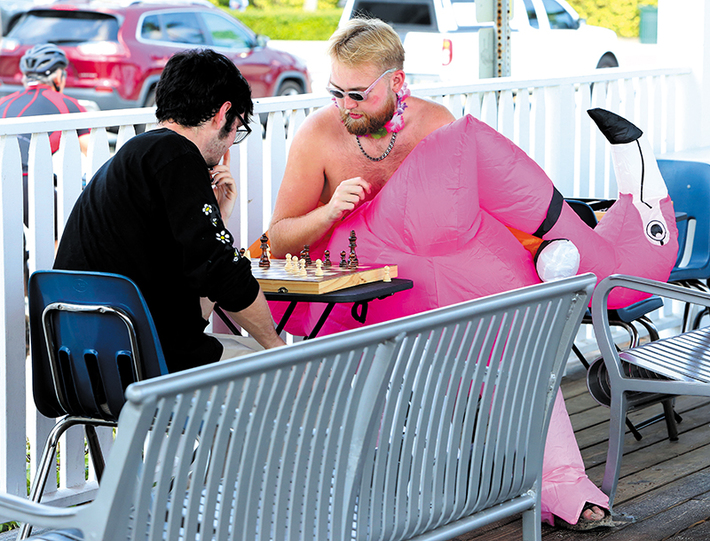 William Horan and Matthew Heles play chess at the Delray Beach Pavilion. They walked up from the beach and found the chess event in progress.

As morning turned to afternoon, a few more players appeared, a few kids, and even more adults, passersby who stopped for a quick game in the Pavilion’s shade.
Among them was a large pink flamingo named Matthew Heles, 19.
Climbing the Pavilion steps from the beach, Heles wore one of those inflatable flamingo costumes, cleverly tricked out to make it appear he’s riding the giant flamingo. He was accompanied by his friend William Horan, 27, dressed like a normal human being.
“Chess is great for learning patience,” Heles said, “and learning to think ahead. I’m very impulsive — obviously, I’m wearing a pink flamingo costume — so it’s good for me to sit down.”
Heles and Horan sat down and played a game.
The flamingo won.