After being featured in The Coastal Star last year, Capt. Christopher Colletta finished his Army service, and while studying in France took part in a D-Day remembrance (above). Photo Provided

At this time last year, Christopher Colletta, born and reared in Delray Beach, was the executive officer of a tank company deployed to Camp Casey in South Korea.

Delores Rangel, executive secretary to the Delray Beach City Commission, was the force behind Project Holiday, which sends boxes of candy, toiletries and paperback books to service members all over the world.

Over in South Korea, U.S. Army Capt. Colletta was hoping some of those boxes would reach his 75 comrades in Apache Company, 1st Battalion, 9th Cavalry Regiment. He had emailed Rangel after learning about the project. 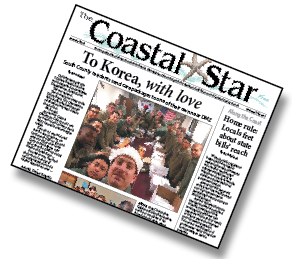 By Christmas, 241 Project Holiday boxes had found Colletta and his men.

This year, Delores Rangel is still the city’s executive secretary, busily gearing up for her 13th annual Project Holiday.

Last year, Colletta was nearing the end of his military service.

“I’ll be in the Army for about six more months, until May, which is when I plan on transitioning to civilian life,” he wrote in an email then. “I intend to earn a master’s degree in international affairs at a school in Europe, but those applications are still in progress.

A year later, we wondered whatever happened to him.

Turns out Colletta has been around.

After leaving the Army on May 15, he returned briefly to Fort Hood, Texas, then took off on the sort of road trip many dream about and few take.

“I went west from Austin through El Paso, up New Mexico to the Four Corners, then all the way up to Yellowstone,” he reports by email. “I ended up visiting my brother in Colorado after that, and then driving all the way from there back home to Delray.

“I lived on my own out of my car, setting up shop at campsites along the way.”

And his plan to earn a master’s degree “at a school in Europe”?

He’s living in Paris these days, a long way from South Korea, and pursuing that degree at the prestigious Paris Institute of Political Studies, known as Sciences Po.

“I am studying International Affairs, focusing on security issues, diplomacy and East Asia. I figured that would provide the most continuity from my professional experiences serving in Korea to a future career. I am loving every minute of it.”

He’s in good company. Sciences Po was founded in 1872, and its alumni include 32 heads of state or government, seven of the past eight French presidents and three past heads of the International Monetary Fund.

But he hasn’t lost touch with the military. Through a former Army colonel teaching a class on American military power at the institute, Colletta was put in touch with the Paris chapter of the Veterans of Foreign Wars, which brought him to the Suresnes American Cemetery outside Paris for the Nov. 11 ceremony marking the end of World War I.

The VFW, along with the Boy Scouts, Girl Scouts and the Army’s 173rd Airborne, helped out by displaying all the flags containing the insignia of American military units that served in WWI.

“I just felt privileged to be in attendance,” Colletta wrote. “The president, secretary of state, chairman of the joint chiefs of staff, chief of staff of the Army, NATO supreme allied commander, congressmen … they were all there.”

Colletta will have Paris until May 2020, when he expects to complete his master’s degree in international security.

“After my degree, I still have to decide where I will work,” he concluded. “I could continue serving in the federal government in the Department of State, for instance, or look to the private sector for work in a think tank, perhaps.

“The opportunities are many with my experience and in this city, and I hope to let you know where I end up in 2020!”
Meanwhile, back in Delray Beach, Delores Rangel is preparing to send another year’s mailing of packages to a few of the 1.3 million men and women on active duty, including about 450,000 who will spend the holidays in “hot spots” such as Afghanistan, Iraq and Syria.
“I have six names on the list to receive packages so far,” she reported just before Thanksgiving. “Of course one name is all I need, as I can send the boxes to that one person, who can then share.”
Project Holiday is accepting donated items through Dec. 7 and welcomes volunteers to help pack them on Dec. 9, at the Delray Beach Community Center, 50 NW First Ave.
“We are aiming for 11 a.m. for packing,” Rangel said. “We start at 8:30 to organize, but all are welcome to come and go as their schedule permits.”
Colletta’s parents, Kathy Schilling and Joseph Colletta, hope to be there.

For a list of requested items and drop-off locations, visit mydelraybeach.com.