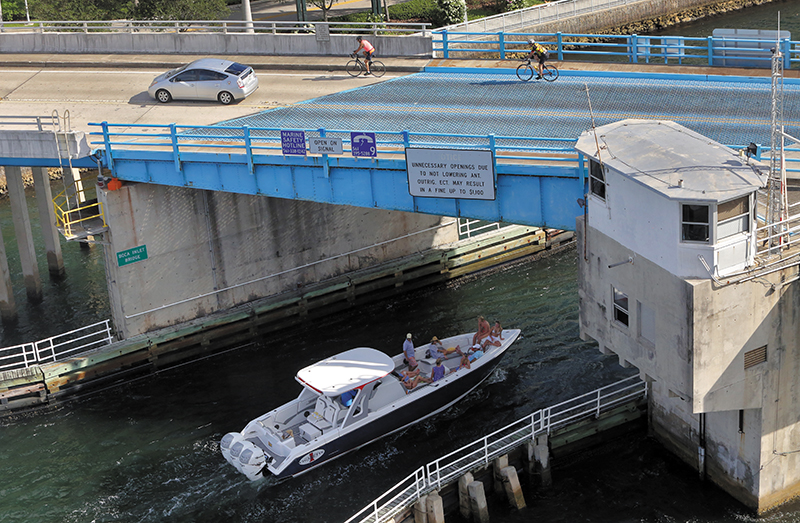 The Boca Raton Inlet bridge was briefly closed six times in late November because of electrical problems. The closures caused traffic delays for thousands of drivers.

They’re often called arteries — the streets and roads that carry drivers and their vehicles back and forth. And as with human arteries, any blockage can cause a problem.
As recent issues with the Boca Raton Inlet bridge have shown, when one bridge is closed, traffic becomes a headache for thousands of drivers. When a second one is closed, traffic becomes a nightmare.
But South County drivers shouldn’t look at the recent traffic jams as something that will happen constantly due to problems with the area’s bridges.
“These bridges don’t have structural problems,” said Barry Meve, Palm Beach County bridge superintendent. “They’re well maintained and there aren’t any major problems. These bridges are designed to operate over a 75-year life.”
South Palm Beach County residents largely use six bridges to move to and from and about the barrier island on the east side of the Intracoastal Waterway: the Linton Boulevard bridge, the Spanish River Boulevard bridge, the Palmetto Park Road bridge, the Boca Inlet bridge on State Road A1A, the Camino Real bridge and the Hillsboro Boulevard bridge in Broward County.
Three of the bridges are younger than 50: the Linton Boulevard bridge, built in 1981 (37), the Spanish River Boulevard bridge in 1971 (47), and the Palmetto Park Road bridge in 1987 (31). The Boca Inlet bridge was built in 1963 (55), the Camino Real bridge in 1939 (79), and the Hillsboro Boulevard bridge in 1957 (61).
The Camino Real bridge, which closed in April for a yearlong rehabilitation project, is now expected to remain closed until July, according to engineers. 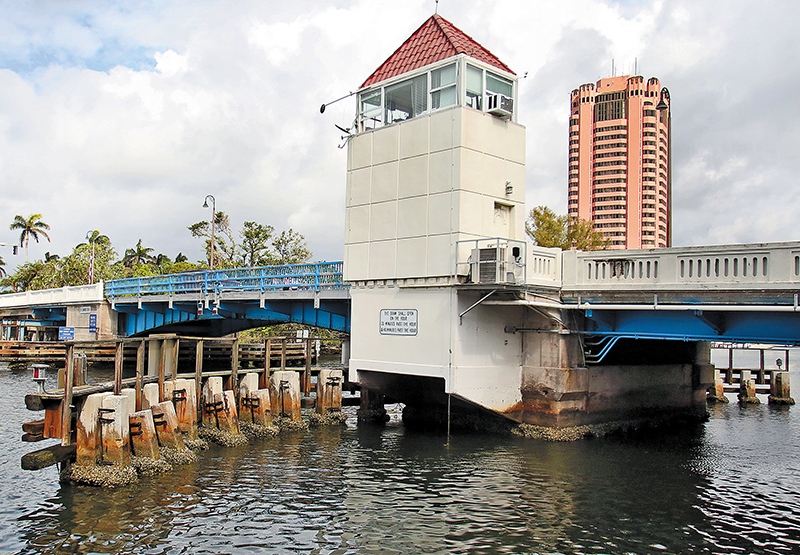 The Camino Real bridge closed in April for rehab work. When the Boca Inlet bridge had problems, traffic backed up because this bridge was already closed.

People who used that bridge could travel north to the Palmetto Park Road bridge, then take the Boca Inlet bridge if they need to head south. Or they could head south to the Hillsboro Boulevard bridge to get across the Intracoastal.
Things got complicated when the Boca Inlet bridge shut down six times in the last two weeks of November because of an electrical problem.
“These bridges are separate as far as their operations go, but there is coordination each time one of them opens,” Meve said. “All of that is interlocked, so if one thing happens to a second bridge, the entire operation stops. We try to coordinate so two bridges aren’t closed at once. Only when there is a problem does anyone notice.”
Florida Power & Light officials installed a “line monitor” to track power surges at the Boca Inlet bridge, said Guillermo Canedo, a Florida Department of Transportation spokesman. FDOT is responsible for maintaining the Boca Inlet, Spanish River Boulevard and Hillsboro Boulevard bridges.
Palm Beach County is responsible for the Camino Real, Linton Boulevard and Palmetto Park Road bridges.
“Over the last few weeks we haven’t had any power surges that affected the [Boca Inlet] bridge,” Canedo said. “We’re continuing to work with FPL to isolate and resolve the problem.”
Meve said the 306 fixed bridges the county is responsible for are inspected every 24 months, while its eight drawbridges are inspected every 12 months.
“We have a mechanical engineer and an electrical engineer on the inspection team,” he said. “We also go underwater to inspect the pilings.”
Meve said the Linton bridge is not structurally deficient or functionally obsolete. The Palmetto Park Road bridge is not structurally deficient, but it is functionally obsolete because of narrow lanes, absence of bike lanes and the existence of sight hazards.
“That doesn’t mean it’s not safe,” Meve said. “Nor is the designation an indication that there is something wrong with the structure of the bridge.”
However, there are no immediate plans to rehab the bridge, he said.
The Camino Real bridge was deemed structurally deficient, forcing the county to plan the $8.9 million rehab project.
Kiewit Infrastructure South, of Broward County, will widen the bridge, renovate and replace the fender system, install new mechanical equipment, reconstruct the approaches and sidewalks, make minor drainage improvements and move the bridge tender’s house from the southeast corner to the northeast corner.
“It’s going to be functionally improved from what it was originally,” said Kristine Frazell-Smith, manager of the county’s Local Roads Section.
FDOT says none of its three bridges is considered structurally deficient nor functionally obsolete. 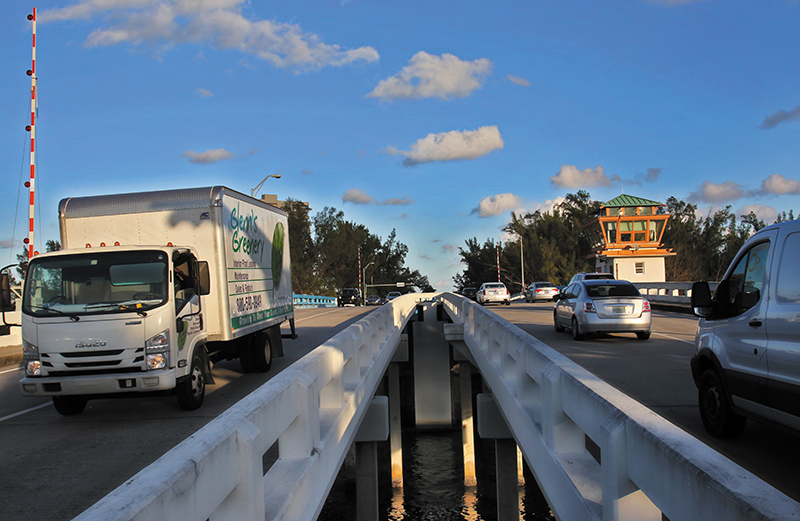 The Spanish River Boulevard bridge is one of six that drivers in South Palm Beach County use to get across the Intracoastal Waterway. Work on the bridge is tentatively scheduled for 2019.