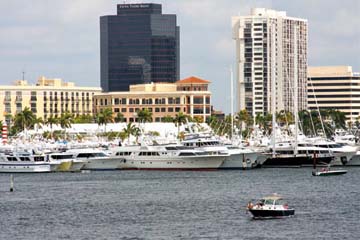 More than 44,000 boat lovers attended the Palm Beach International Boat Show, one of the top boat shows in the country. The show, held March 21-24, featured more than $1.2 billion worth of boats, yachts and accessories from the world’s leading marine manufacturers.
It was a 10 percent increase in attendance over the previous year and a 30 percent increase in the number of boats in the show — about 600 total, from small fishing boats to super yachts. Space for boats was sold out early, said a boat show official.
The show reflects a rising interest in boat and yacht sales. Florida led the country in boat sales in 2011 with about $1.5 billion.
Sales of new powerboats in 2012 increased 10 percent over the previous year, and early projections indicate the industry will see additional increases in 2013 by as much as 5 to 10 percent, according to the National Marine Manufacturers Association.
The star of the Palm Beach show was the largest boat, Kismet, and at 223 feet it’s aptly described as a super yacht. Built by Lurssen, the yacht is listed for $100 million, and leases for about $700,000 a week plus brokerage fees, which adds up to about $1 million a week. The agency selling the yacht is Moran Yacht and Ship based in Fort Lauderdale. The sleek yacht sleeps 12 in six staterooms. 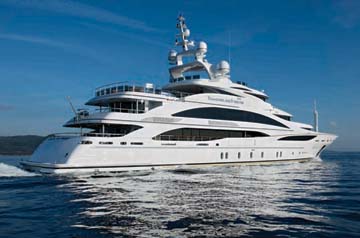 The asking price for Diamonds are Forever: $59.5 million. Photo provided

Another show-stopper was the 200-foot Diamonds are Forever, built by Benetti, displayed by Worth Avenue Yachts. The price is $59.5 million. The six-deck super yacht features two panoramic master suites and four guest staterooms. Elevators take guests to all decks, including the full-beam sky lounge. The aft part of the sun deck can be transformed into a helipad.
“A 10 percent boost in retail in 2012 is significant, as this is the first time since the recession we saw healthy growth across the powerboat market, which will create momentum in 2013,” said Thom Dammrich, NMMA president.
An improved economy and resurgence in American’s love for the outdoors fueled the sales boost, he said.
The U.S. boating industry generates about $30 billion in annual revenue, according to Dammrich.
Smaller boats — less than 27 feet — make up 96 percent of the 12.4 million registered boats in the U.S., “and are leading the industry out of the recession,” he said.

But super yachts, bought by billionaires such as Carlos Slim of Mexico, are doing well and sailed through the recession.